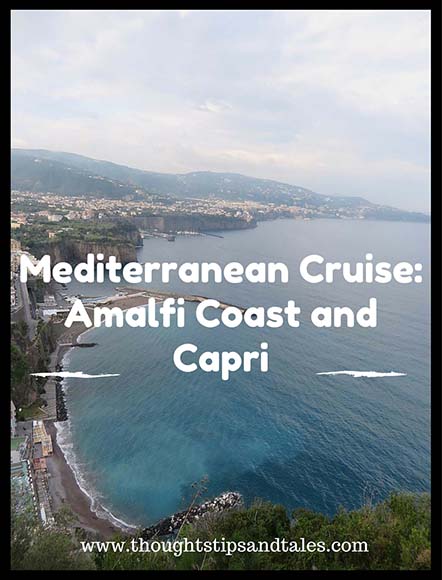 After taking a shore excursion along the Amalfi Coast while docked at Naples, Italy, during a Mediterranean cruise, I decided that one of my new favorite locations in the world is the island of Capri.

The description of the 10-hour day trip portrayed it as “breathtaking landscapes of Amalfi Coast and Capri, Italy’s glamorous seaside getaway” — and it was right on the mark.

Got on a tour bus in Naples and drove past Mt. Vesuvius, which you could see in the distance, on the way to Positano — a lovely town with tons of houses built on the cliffside. (How do they build the houses like that?!) We had an hour to shop there. 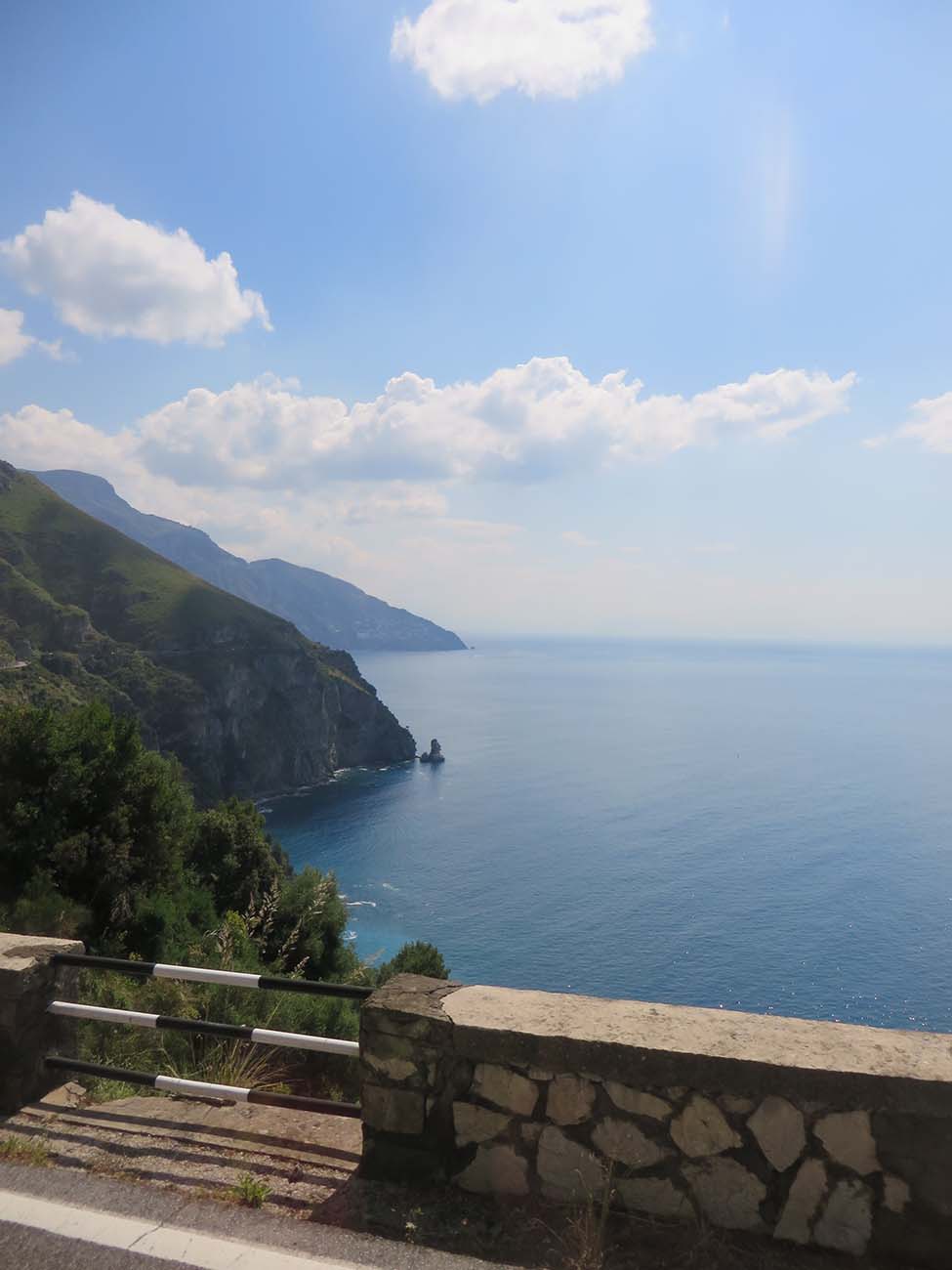 Then, after driving along the windy roads overlooking the scenic Amalfi Coast, we took a hydrofoil (ferry) to Capri and took a funicular (cable car) up the mountain to La Piazzetta, the heart of Capri.

We had two hours to wander around, and I could’ve stayed there all day! 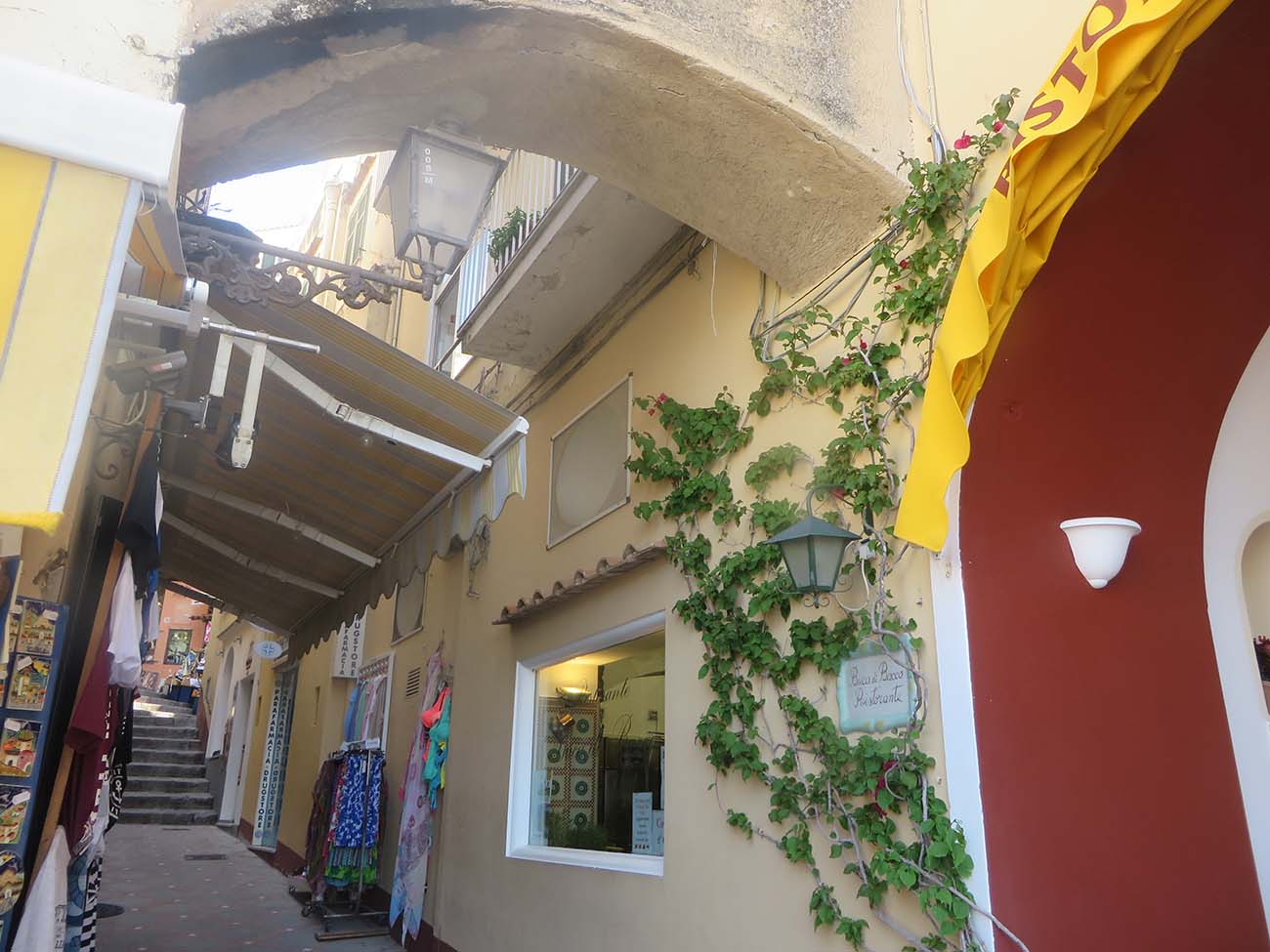 I loved Capri! It was just the most picturesque, charming village ever. 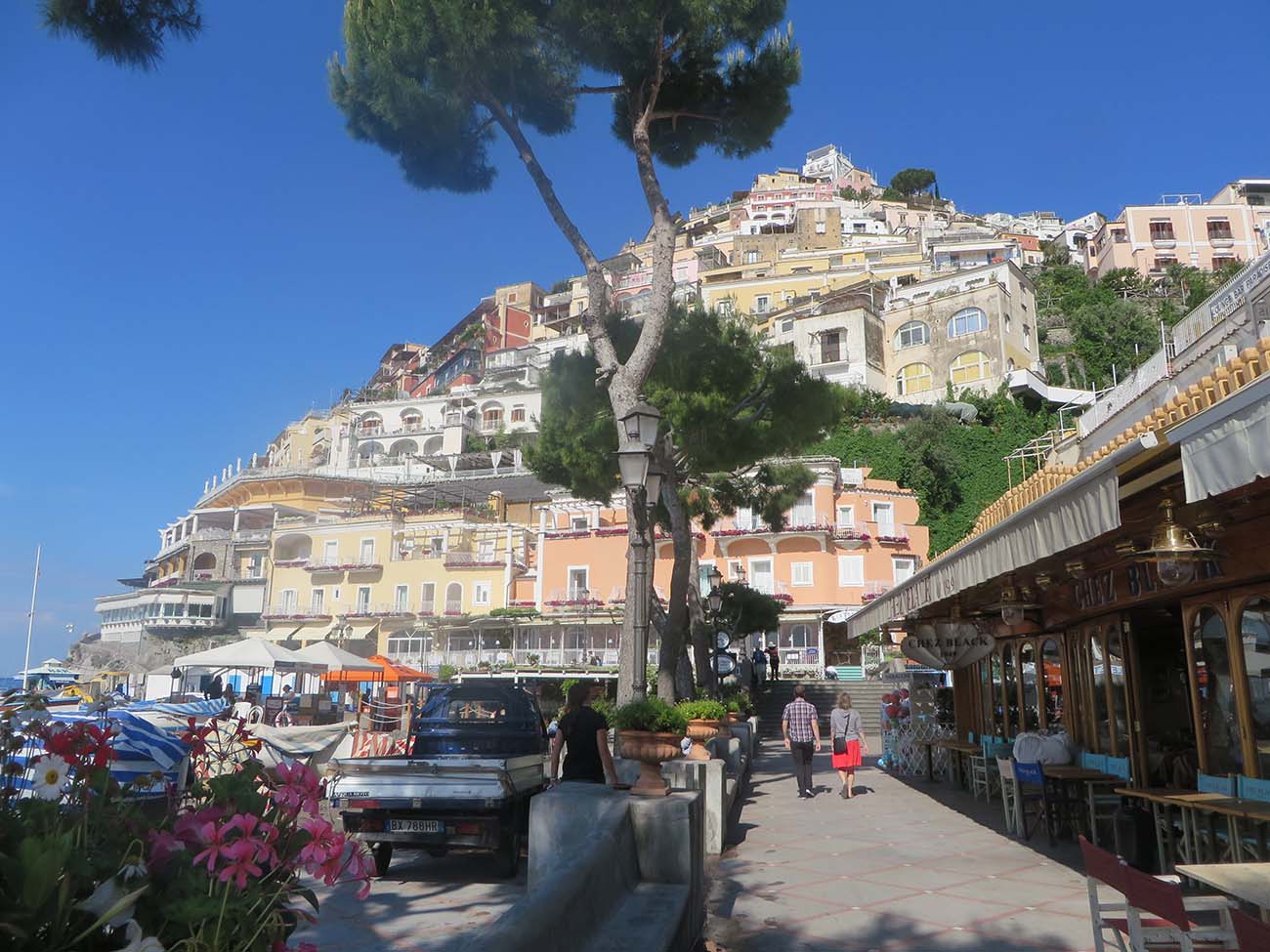 The steep, narrow streets were lined with lovely little shops, and the houses built on the cliffside were a gorgeous backdrop.

Came across a bicycle parked on the side of the road and the scene looked like something from a postcard. 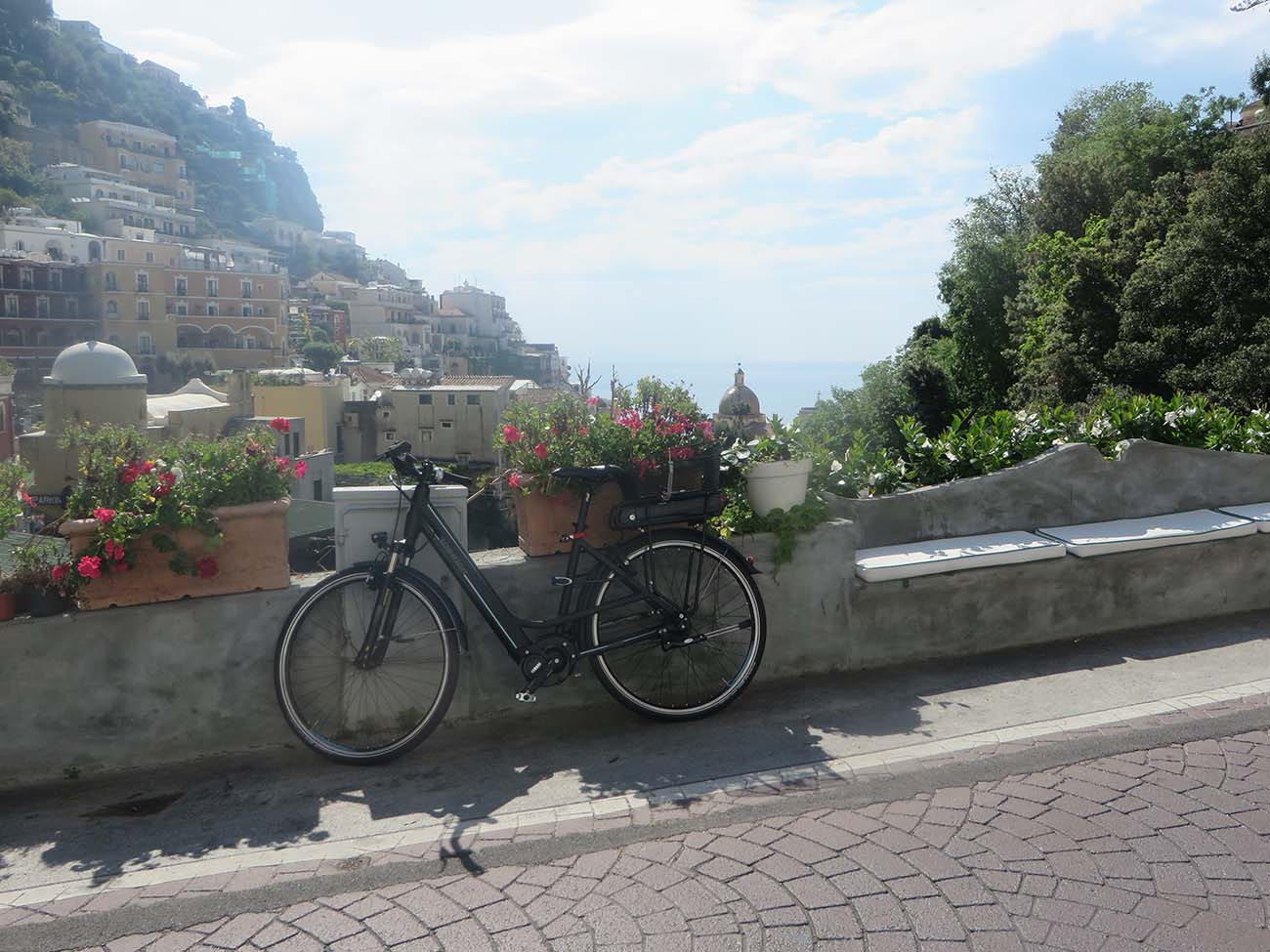 My favorite shop there looked like a watercolor painting. It was so beautiful it was surreal. 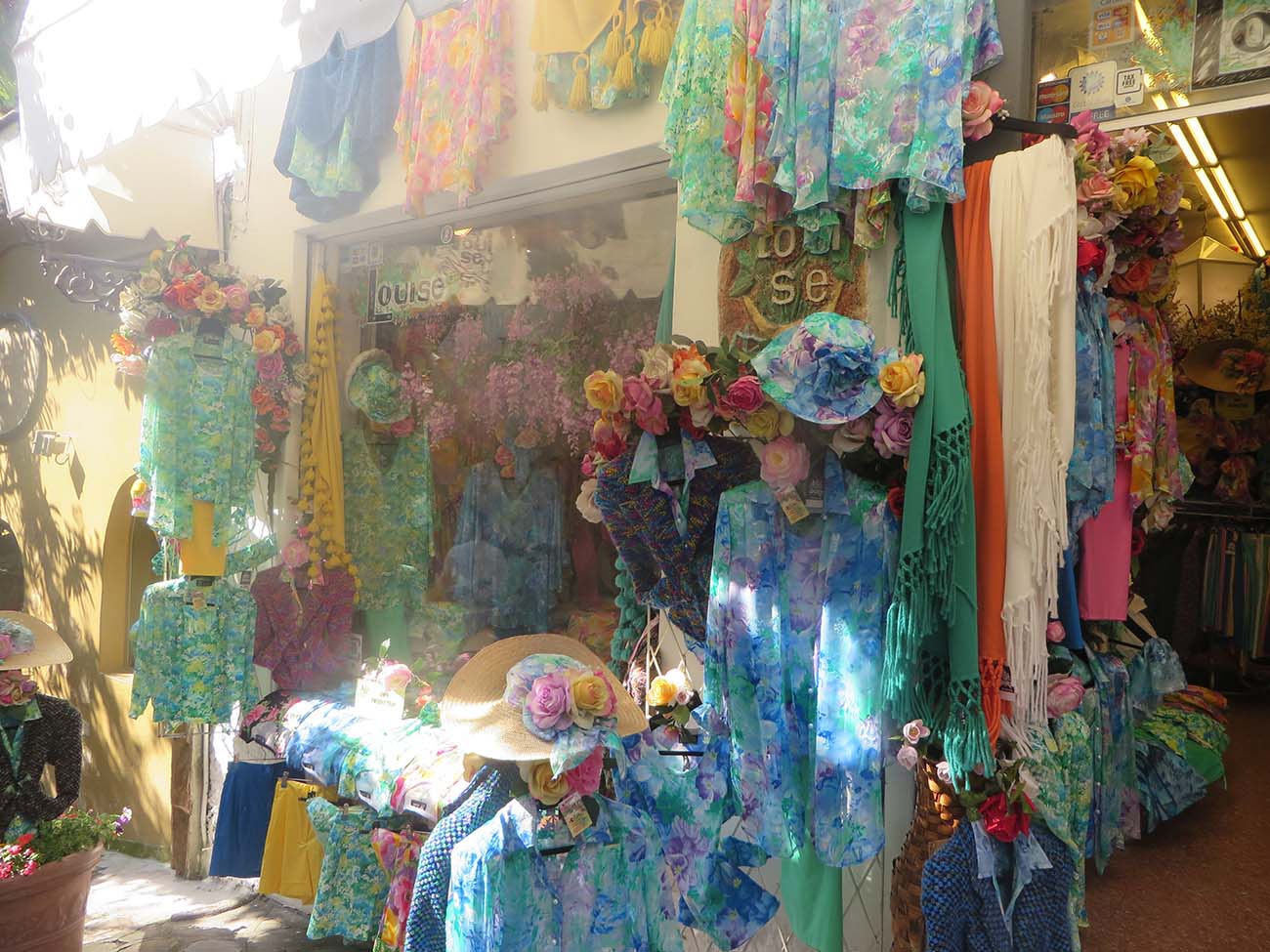 The two-hour stop was also our lunch break, so I found a small deli and ordered a ham and cheese sandwich on homemade bread, sat on a bench overlooking the hillside eating it for a few minutes, then stuck it in my tote bag and picked at the rest while shopping.  Shopping is much more fun than wasting time sitting down to eat! 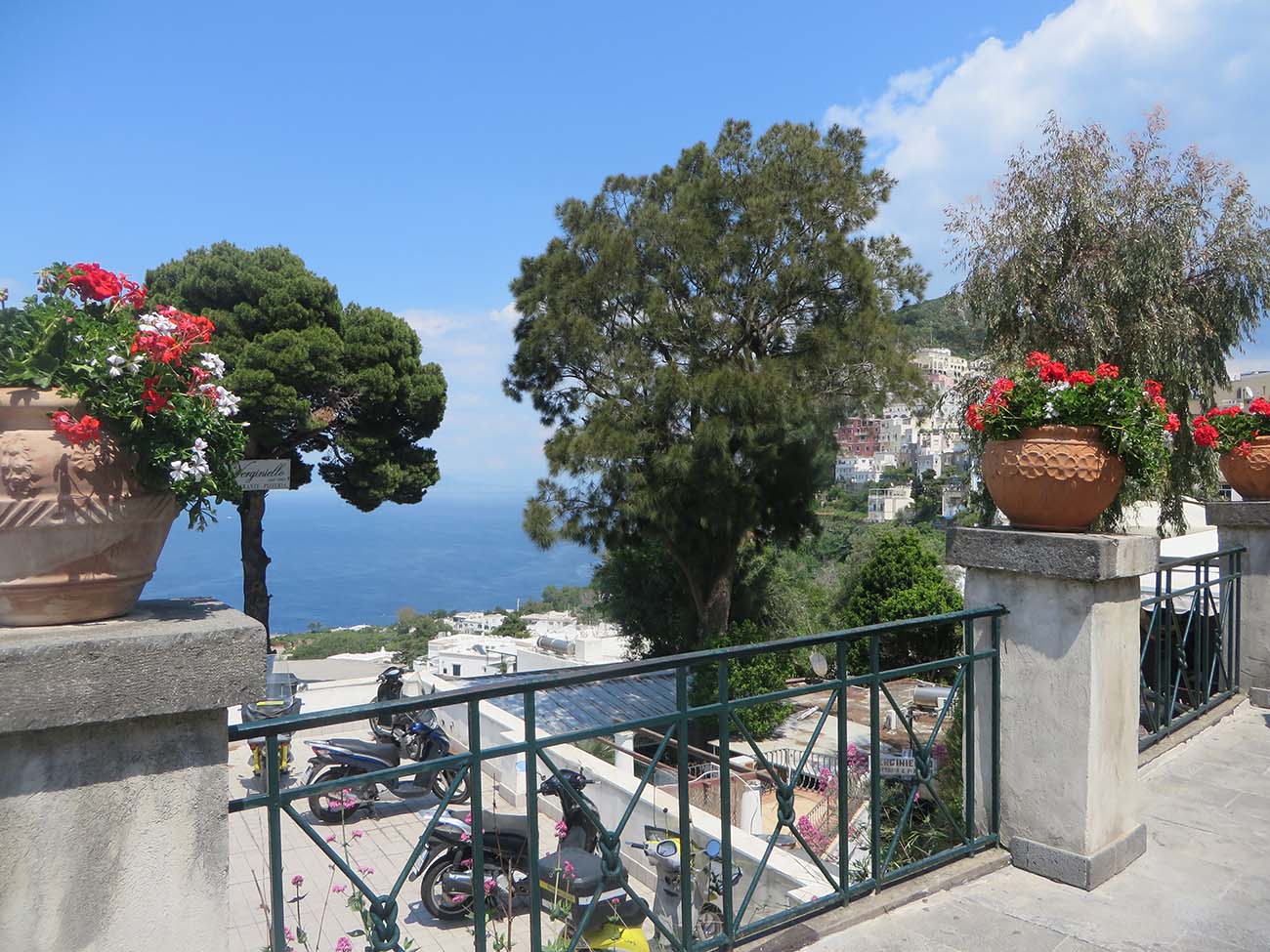 I wanted to bring small gifts home to friends and family, and found a little shop that sold limoncello liqueur — which Capri is famous for. The store had lemon-everything — aprons, kitchenware, etc. — and a limoncello gelato machine, too (which I just had to sample for dessert). Bought ten cute little bottles of limoncello — which were shaped like high heels, guitars and various other things — and had them shipped home. 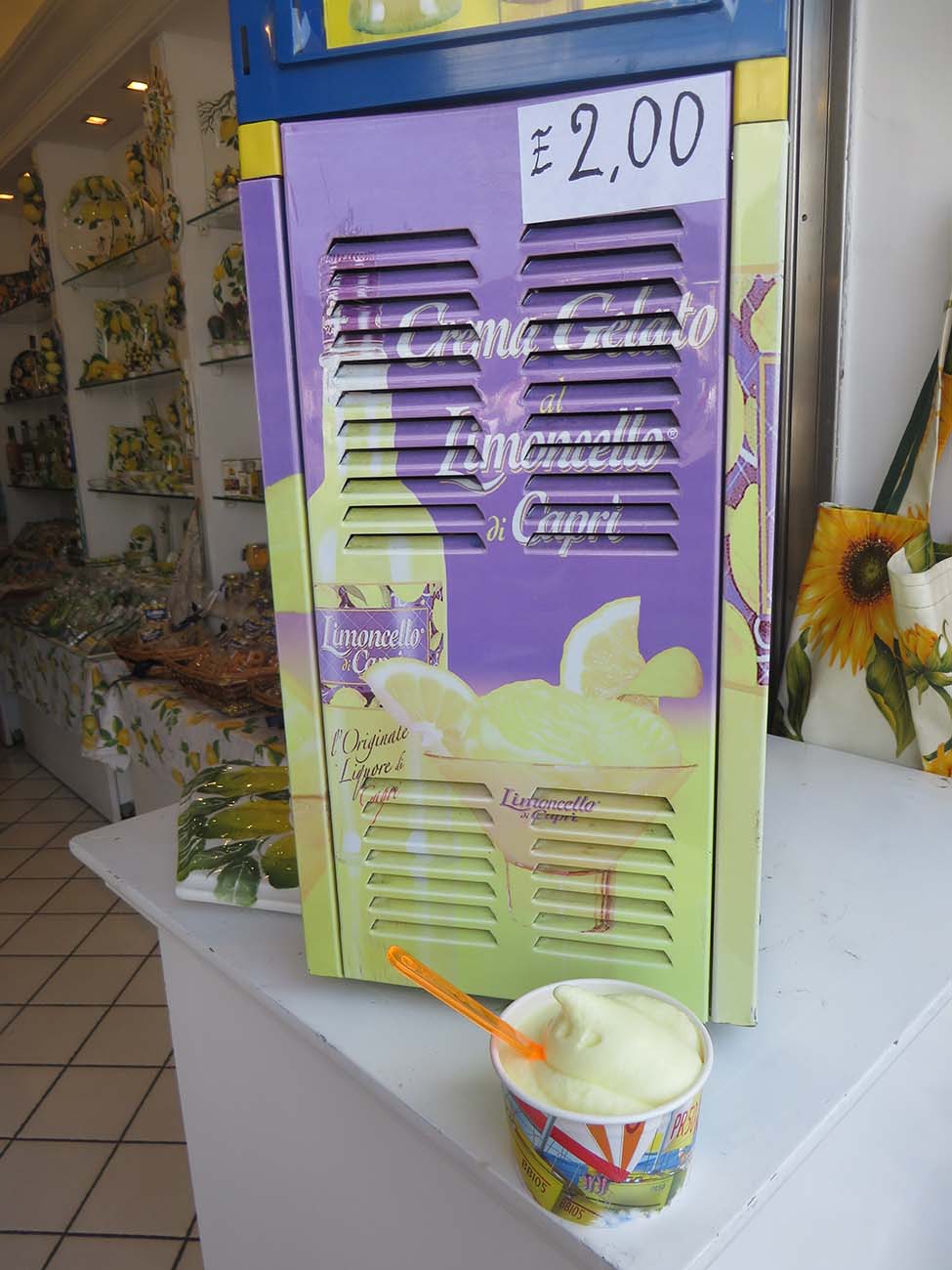 Our tour guide, Stephano, took us for a fabulous one-hour “back streets for locals only” stroll when the group met again, and it was heavenly. You could hear birds chirping, smell fresh flowers, take in fantastic ocean views and walk by the ornate gates of fabulous villas.

And there were no crowds, unlike in the rest of the town, so it was kind of like being “rich and famous” for a while. On top of that, it was sunny and 70 degrees with a slight breeze — the perfect day.

While we walked, Stephano told us it was quite expensive to live in Capri. He wanted to live in the area and someone gave him a lead on an apartment. After walking up 300 steps (!!!) to get to the apartment to meet the landlord, he found that a two-room apartment there was $4,000 euros a month! (He didn’t take it — but the story illustrated his point quite well. And I found out how people got to the houses built on the side of the mountain.)

On the walk back to the funicular and hydrofoil to return to Naples by boat, we passed a five-star hotel where the stars go because it guarantees privacy and has a private beach. Stephano told how one time he had stopped a group there and noticed everyone wandered away; he later found out Richard Gere had walked out the front door of the hotel. He has a friend who works at the front desk who told him Brad and Angelina were also guests there. (Nobody famous walked out while we were in front, though.)

If you ever get a chance to visit the Amalfi Coast — and Capri, in particular — go! It’s absolutely one of the most beautiful places on earth. 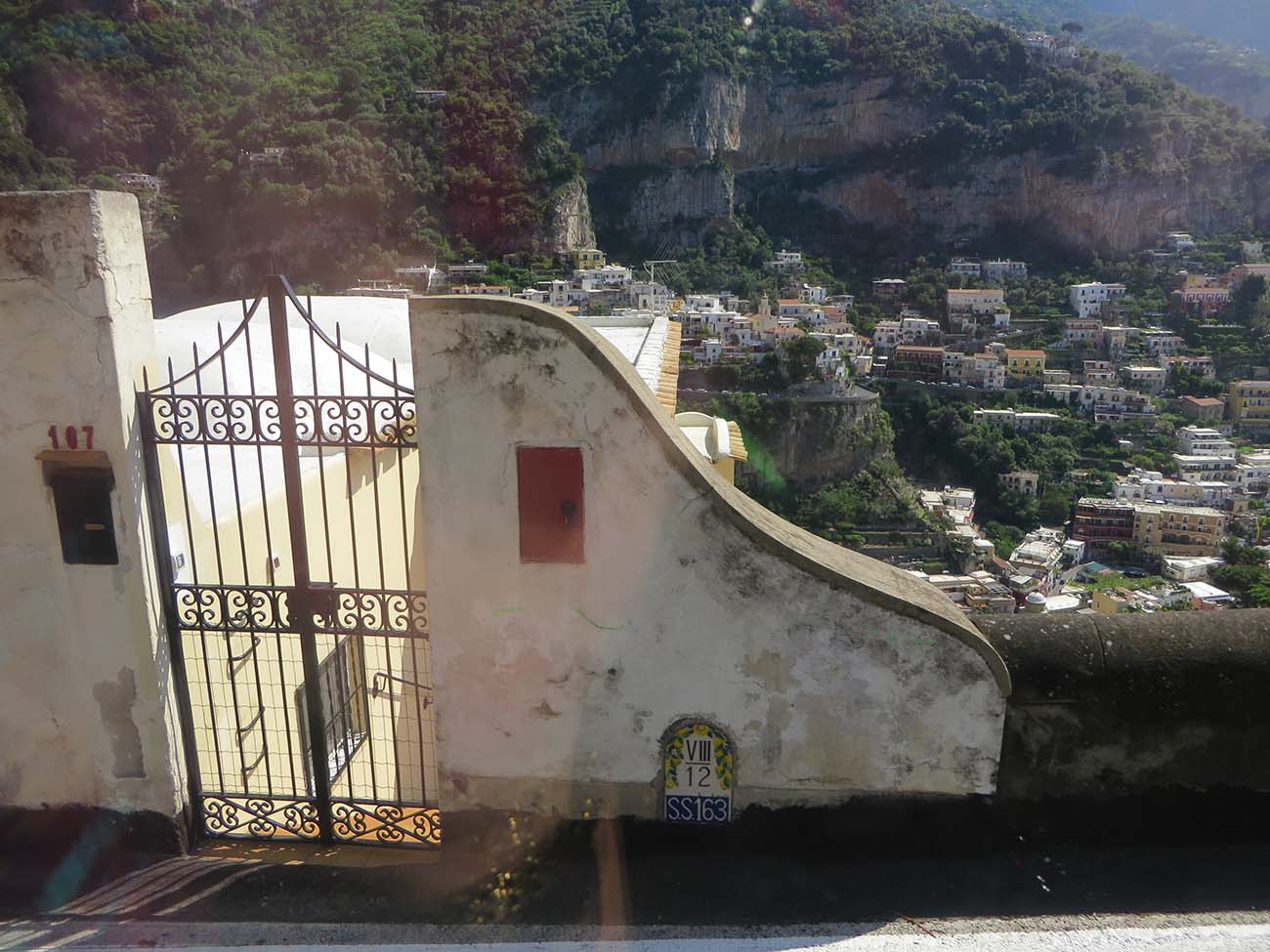 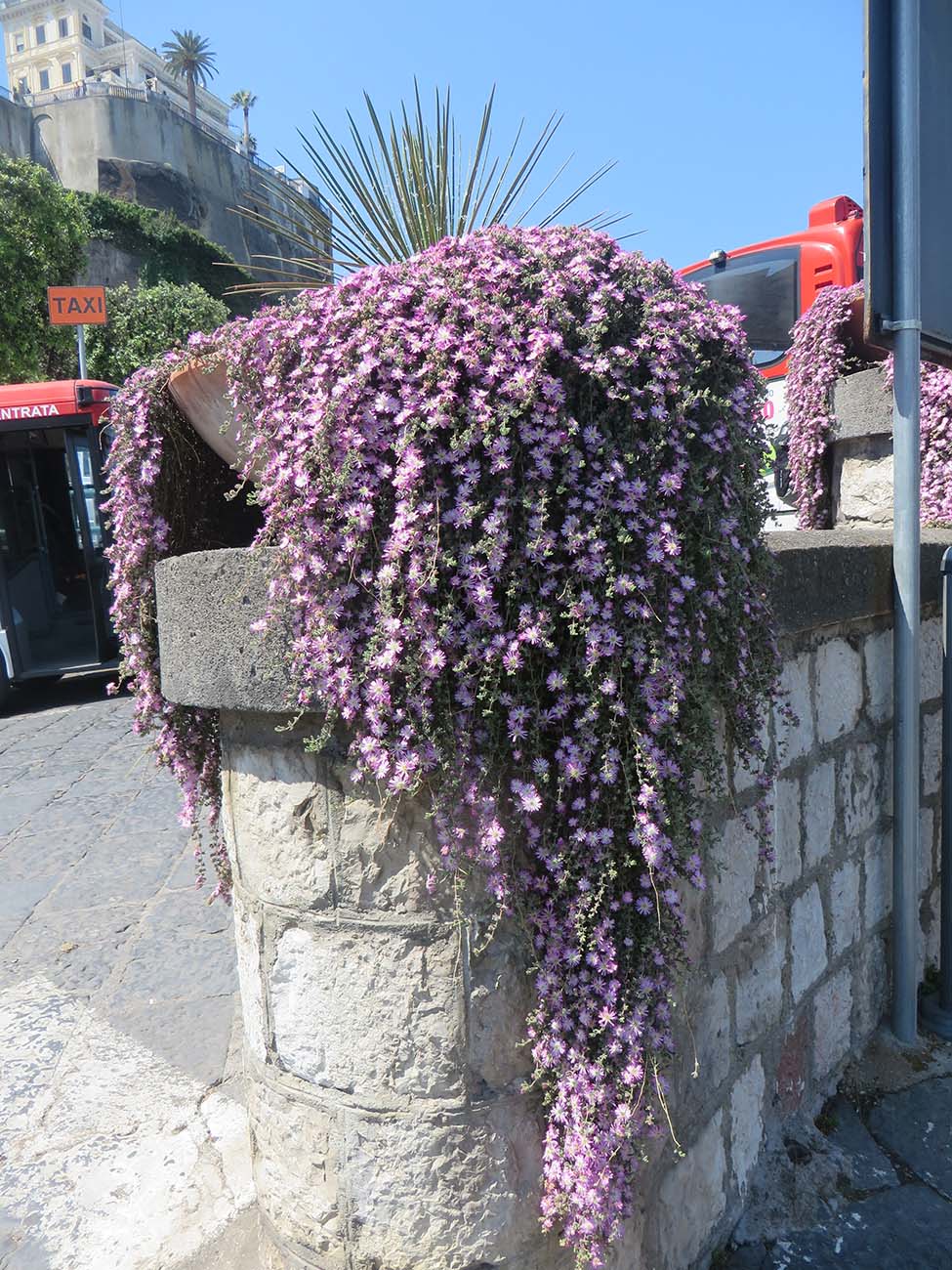 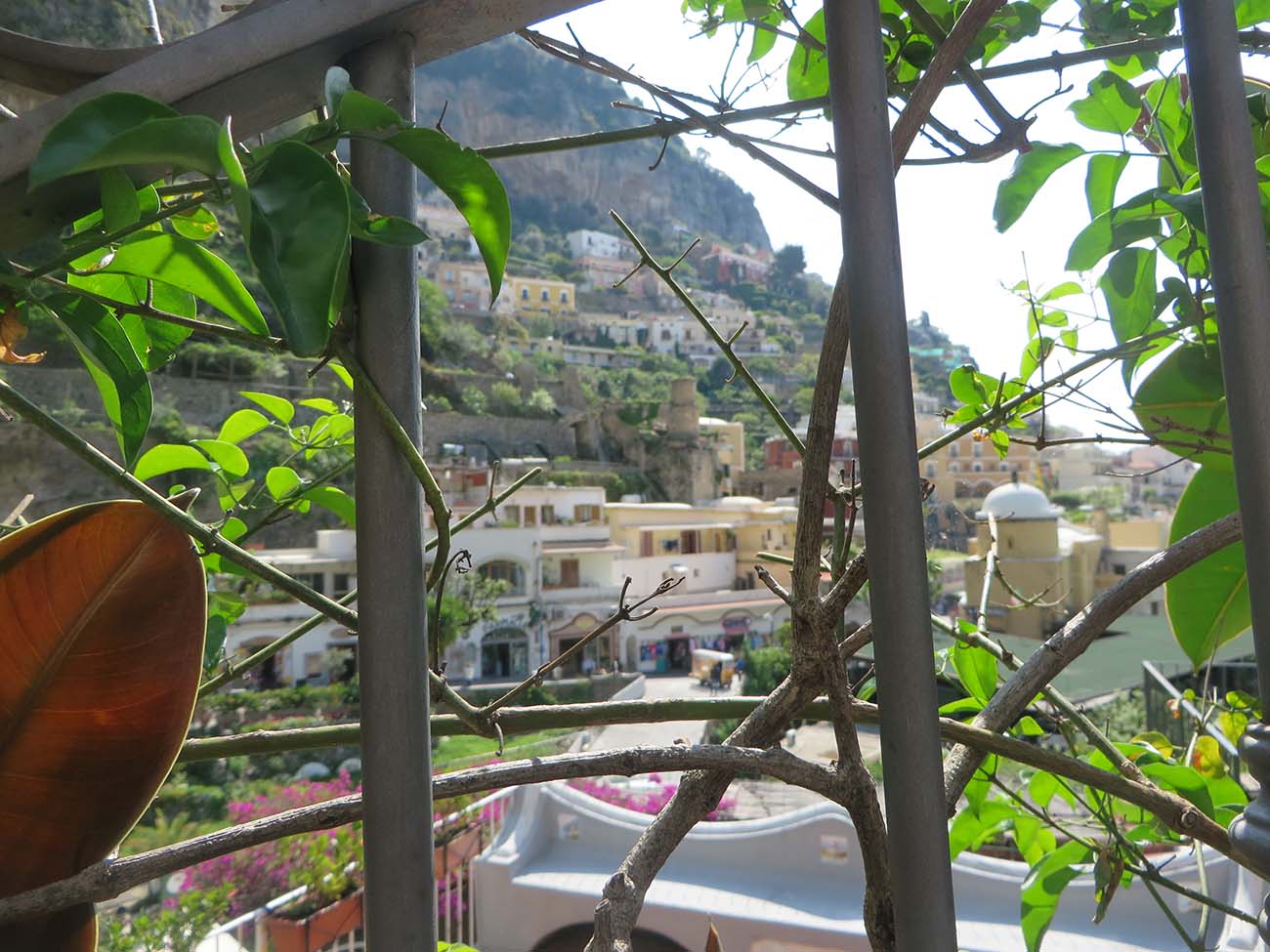