Posted on March 7, 2017 by blogqueendiane 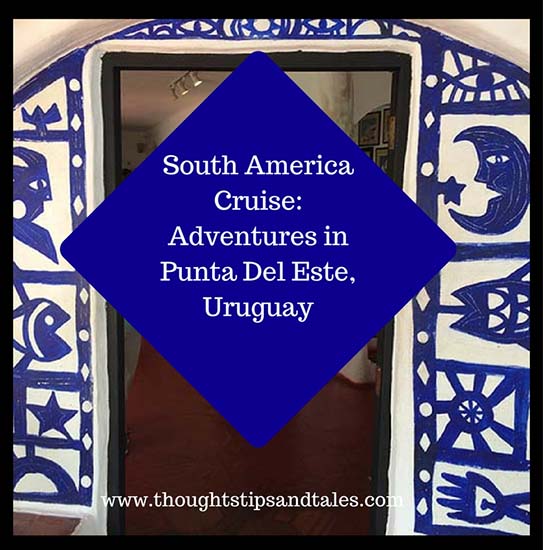 I went there on a cruise around South America, and discovered it’s a very cool place. Here’s my story:

On the third day of our cruise, my friend Merry Ellen and I took a shore excursion bus trip to see the highlights of Punta Este. While it didn’t sound especially exciting when we registered for it, at the end of the day we thought it was great! 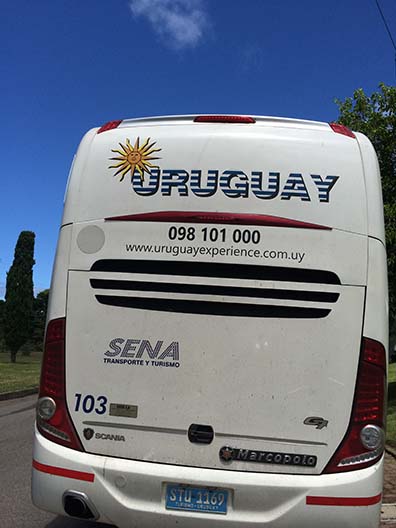 First, the bus drove us through several interesting neighborhoods and along the shoreline, where we stopped to take photos of The Mermaids sculpture. 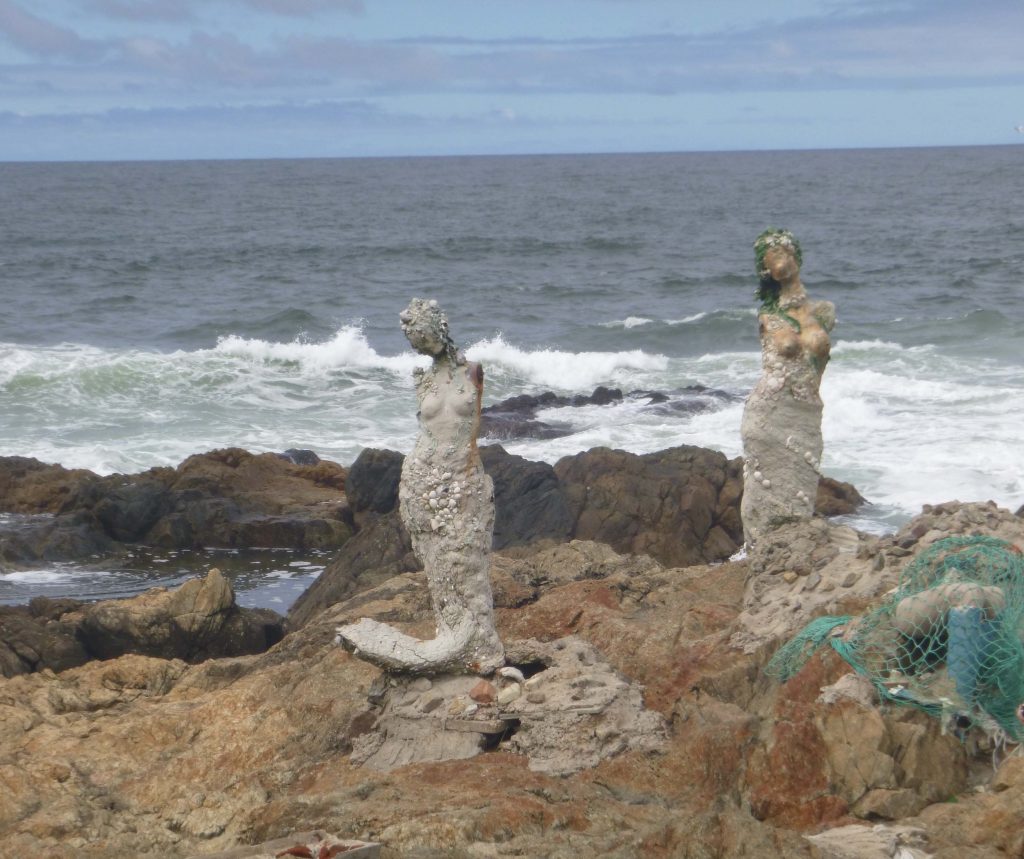 Then we got off the bus to visit “The Hand” — a world-famous sculpture. What was unique about this particular hand was that it appeared to be “buried” on a public beach, and giant fingertips emerged from the sand. 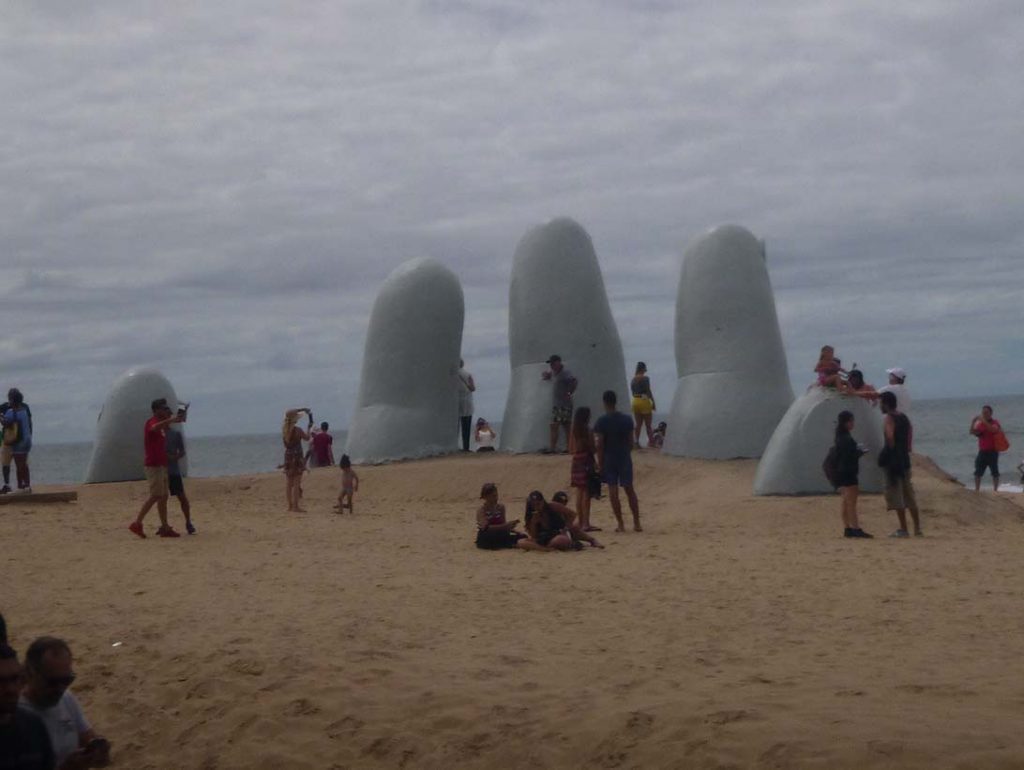 All the fingers had fingernails on the back side. 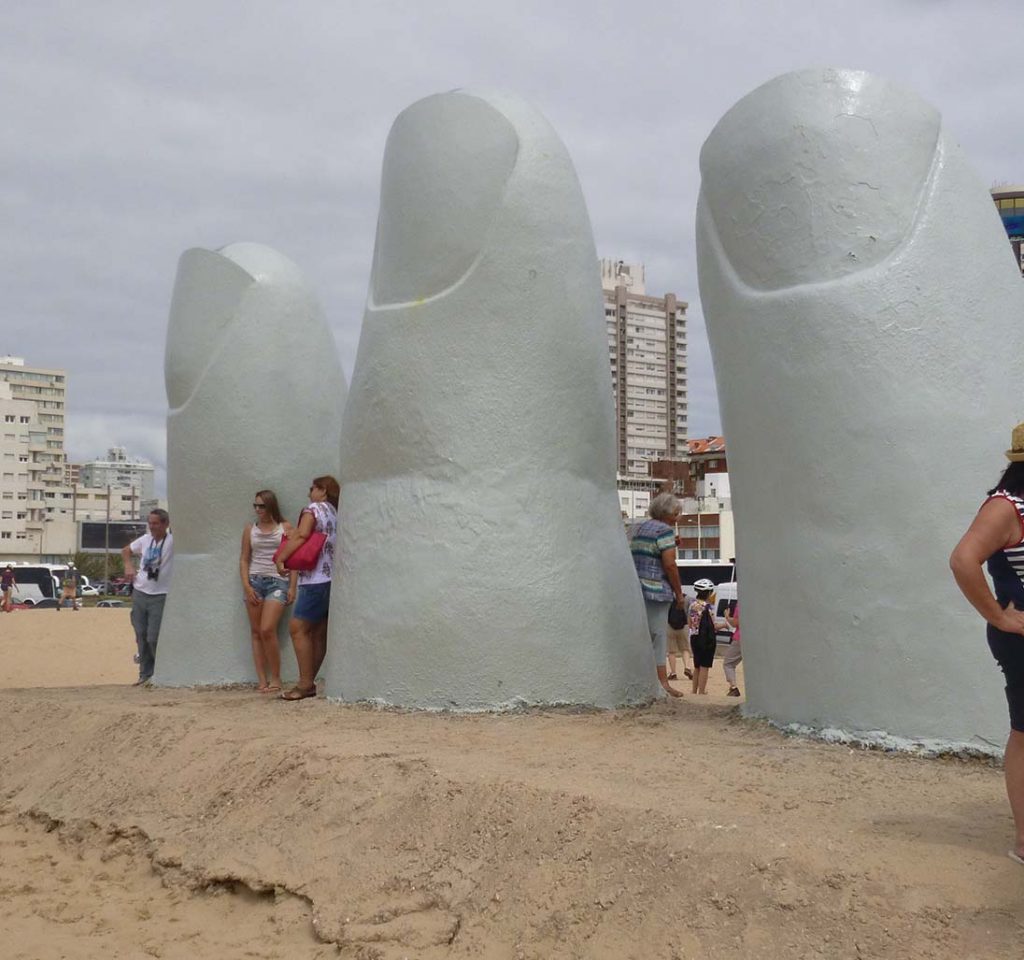 This was a very unique sculpture! (All the beach goers were standing next to one of the fingers and having their photos taken.) 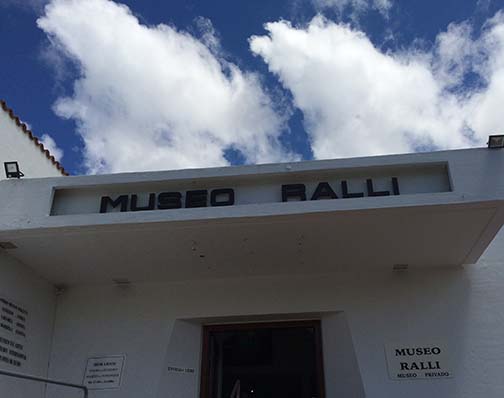 Then we went to the Ralli Museum of Contemporary Art in the Beverly Hills (!) district. I’m not a sophisticated or knowledgeable art fan, but this museum was very cool, and I have heard of Salvador Dali — and was happy to see some of his artwork on display. 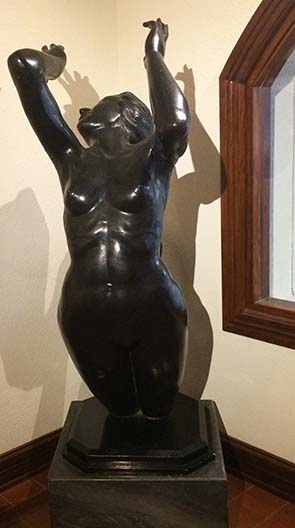 One of my favorite pieces was this life-like statue of a naked woman on a bench. Cool, huh? 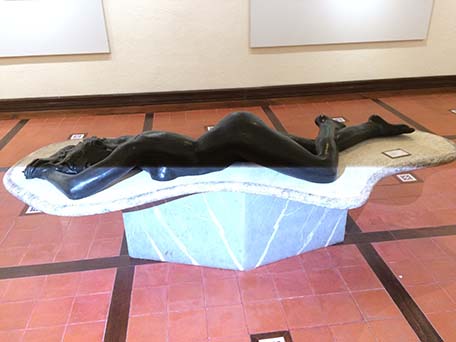 We had some fun there when we spied a life-sized statue of a nude woman who appeared to be fondling her breasts. (Yes, we sometimes have the sense of humor of third graders.) I stood next to it and sort of cupped my hands under my own breasts, and had Merry Ellen take my photo when there weren’t too many people around…

After that stop, we went to Casapueblo, a multi-level (nine layers of rooms!) villa connected by staircases that was built on the side of a steep cliff overlooking the ocean. This was the home and workshop of Carlos Paez Vilaro, an internationally known artist and sculptor. (Below is a realistic looking photo of him, his cat and his castle!) 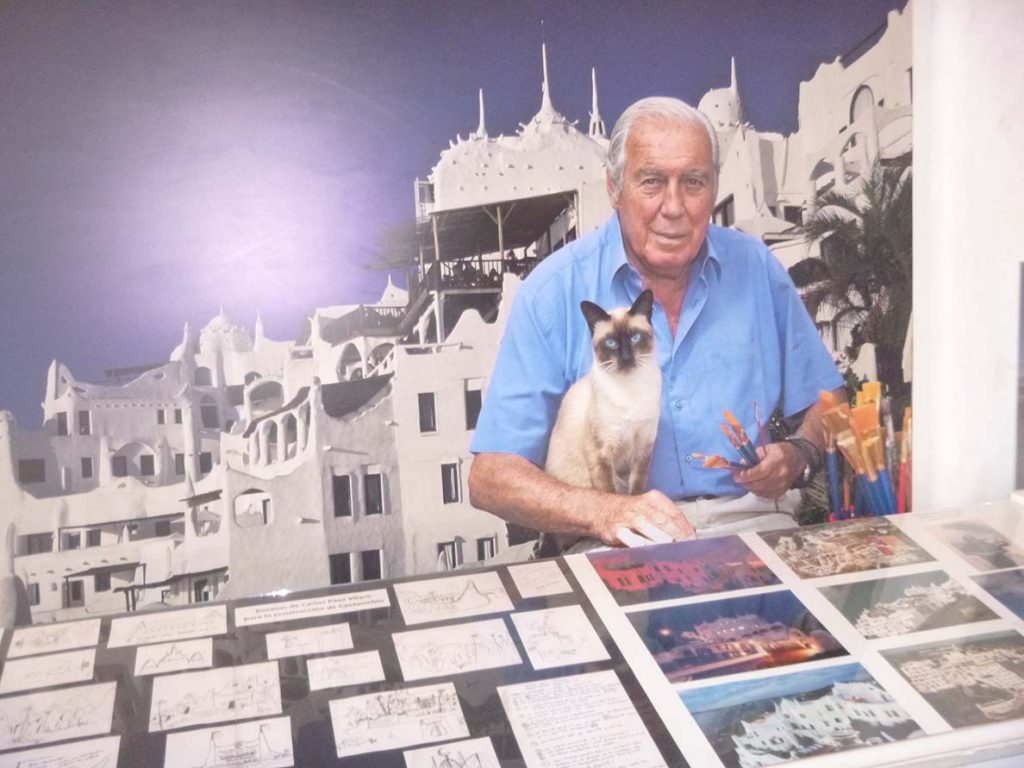 The stark white building filled with cheerful artwork and the brilliant blue ocean below were stunning. 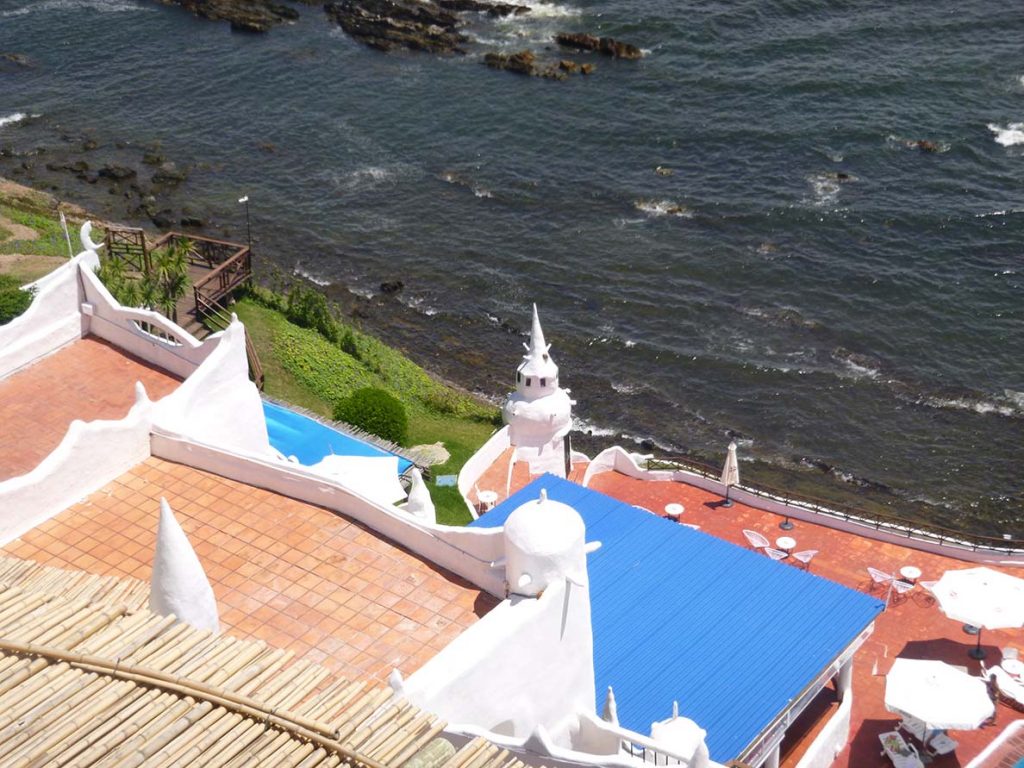 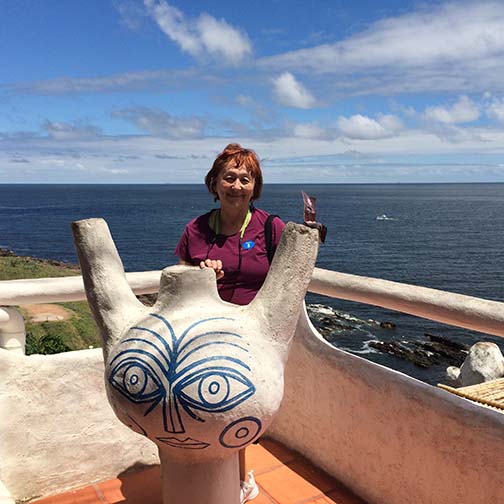 The only thing I know about art is “I know what I like when I see it” — but I absolutely loved this artist’s style and the colors he used. Could not get enough of it and took hundreds of photos! 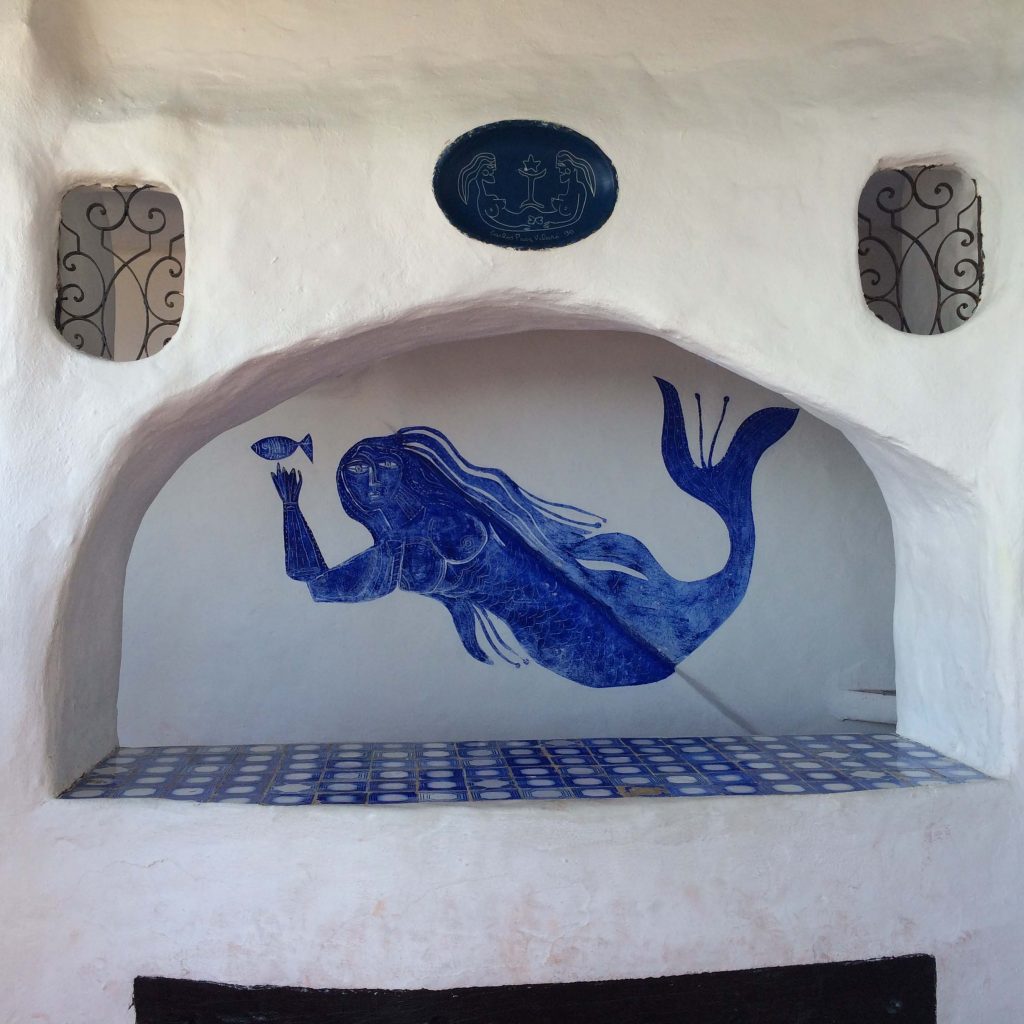 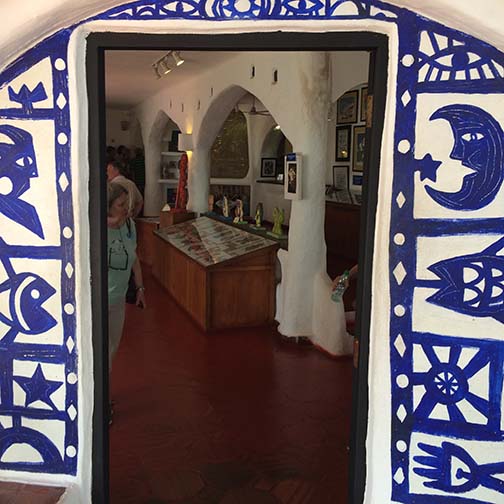 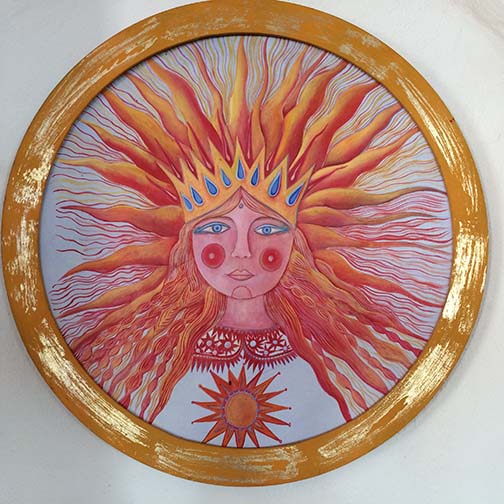 We got off the bus about a half mile away from the pier so we could shop, and the bus driver pointed down the shore to the pier and said it’d be an easy walk back to get on the last tender to the ship, which left at 3:30.

We took off to find the shops the driver had mentioned, which were several blocks inland from the ocean — and tried to keep an eye on the shore so we could find our way back. We covered a lot of territory and bought a few souvenirs.

At 2:30, we were starving and tried to get ice cream at a local shop. Our mouths were watering, but, unfortunately, they wouldn’t take US dollars or credit cards, and we hadn’t converted any money to Uruguay pesos since we were only spending one day in that country.

Shortly after that, we made our way back to the shoreline and could NOT find the pier or our cruise ship in the water — in either direction. We walked frantically half a mile in one way, then turned around and race-walked half a mile the other way, getting concerned because the last tender was leaving soon.

We realized then that we couldn’t even take a taxi to the pier because we didn’t have the correct currency – and we were in pretty dire straights.

Finally, I went into a restaurant and used my woefully inadequate Spanish to hold up a map I’d been carrying (yes, and we still got lost!) to ask a young woman where the pier was. Thankfully, she spoke English and pointed out that we were on a peninsula — and had crossed from one side to the other, so the oceanfront where we were was not the oceanfront where our cruise ship was tendered! She directed us to walk five blocks back across the island to the other shoreline, turn left and assured us we’d find our pier there.

I did stop, however, as we crossed through the island to take a photo of this storefront with the name TITS on it. (Wonder what it was?)  But by that time, we had to practically run to get to the pier by 3:30. 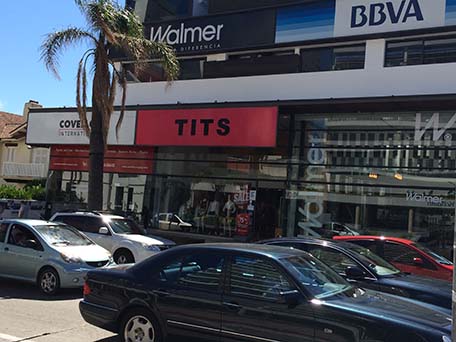 We made it! And so did about 300 other people, who were in line in front of us.

At that point, I reached in my pockets and realized my brand new fairly-expensive camera was no longer on me! As we waited in line, I dumped my tote bag out, too, and it was gone.

Long story made a little longer, we got a pretty bad sunburn waiting nearly two hours there at the pier before we got back to the ship and finally ate lunch at 4:30. I wasn’t a happy camper about my camera but eventually got over it. (The worse thing was losing the hundreds of great photos taken the first few days of the cruise.)

We definitely had an eventful day in Uruguay! 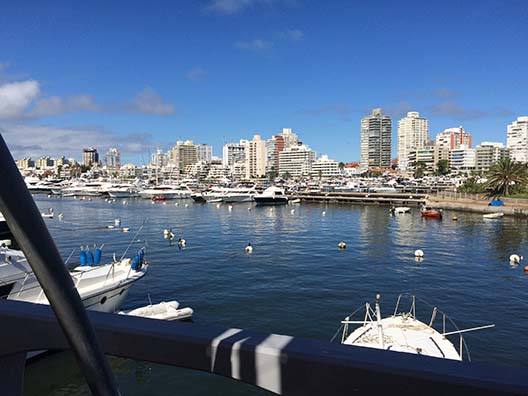