Posted on July 5, 2016 by blogqueendiane 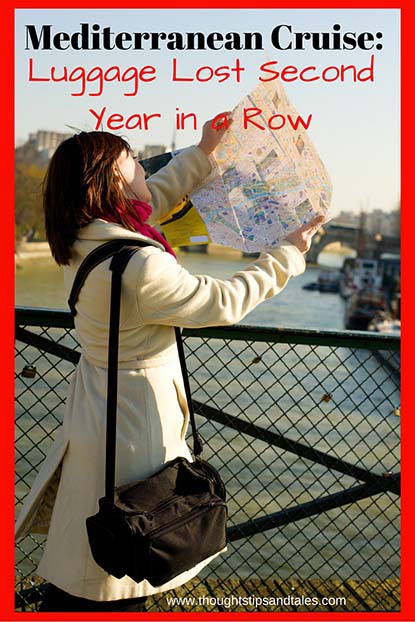 There’s apparently some jinx preventing my suitcase and me from traveling to Europe together…Last year was my first trip to Europe since high school, and I took a Mediterranean cruise on Celebrity cruise lines.

My luggage got lost and didn’t make it to Europe before the ship sailed.

The ship’s concierge was very, very helpful and worked diligently to arrange with the airline to have my suitcase shipped to one of the ports where we docked. In fact, she called the airline every day and reported to me each evening.

Although the suitcase followed us around the Mediterranean, it never caught up to the ship.

Thank goodness I was traveling with a friend and could borrow her curling iron, the most critical item in my big suitcase!

And we had a lot of laughs about the lost luggage. Especially on the fourth or fifth day when we got dressed in the morning and she looked at me and said brightly, “You look nice today!”

I started to thank her, then looked down and realized I was wearing the same clothes from the previous days (basic black). After realizing she was being a little sarcastic, just rolled my eyes and gave her a wan smile.

She kept telling me during the whole trip how well I was handling the lost luggage, and that encouraged me to whine less (maybe she was using Psychology 101 on me).

As it turned out, I got my ripped, torn and beat-up black bag 121 days after the trip began.

Never expected to see my favorite things again, and had spent quite a bit of money buying all new summer clothes and toiletries before its amazing return, and a lot of time dealing with the “lost luggage” claim process.

I’d fallen in love with Italy and Greece, though, and this year I cruised to the Mediterranean again on a solo 10-night cruise that began and ended in Barcelona.

Booked my air transportation through Celebrity cruise line again (since the cruise lines fly you to your first stop if you miss the ship when you book air through them), and, of course, chose a different airline from the previous year!

For some reason, though, the travel department scheduled the flights with only a one-hour layover in Philadelphia before I boarded the trans-Atlantic flight. That didn’t seem like a good idea to me, but they’re the travel experts…

I was due to arrive in Barcelona at 8:55 a.m. local time and had booked a 10:00 shore excursion 3-hour bus tour of Barcelona highlights, since that was the only time available to see the sights. Was really excited to see Spain for the first time, too.

I got to the airport three hours early after reading about long TSA lines, and everything was going fine until I saw an announcement that my plane was delayed 40 minutes. Had mentioned my concerns about the short layover to the gate agent earlier, and she found out the late plane would actually arrive a little earlier than expected and advised me to get on it. She requested an airport cart to pick me up and drive me straight to the next gate, which (of course) was at the opposite end of the Philadelphia airport — but she thought I could make it.

I boarded the plane in the rain, and it was OK til the pilot came on the loudspeaker and said lightning had struck within a mile and the ground crew wasn’t able to roll out the metal ramp to load the luggage until the weather cleared.

He cheerfully advised us to enjoy the wait.

After about 20 minutes  of toe-tapping while I was NOT enjoying the wait, that wonderful ticket agent walked down the aisle and told me I wasn’t going to make the connecting flight and had me get off the plane.

She was so helpful! She booked me on three different flights (instead of the original two), the first of which took off right then at the next gate.  (In the meantime, everyone else got off the plane I’d just been on and got in line to be re-routed.)

As I dashed over and boarded the plane, she yelled after me, “I got your luggage! Everything’s OK!”

Relaxing a little, I flew to Charlotte (where I had to literally run at least half a mile to make the next flight), then on to London Heathrow, where I exchanged some money on a longer layover and flew on to Barcelona.

Unfortunately, things took a turn for the worse there, when I went to the luggage carousel and (shades of last year) watched it turn and turn until I was the only person left.

Like last year, I trudged dejectedly to the Lost Luggage line.

In Barcelona time, it was an hour before the 3:30 p.m. deadline for passengers to board the cruise ship (but in U.S. time, it was the middle of the night — like last year when it happened).

When I finally got to the front of the line, it took 20 minutes to file a claim because the airline rep insisted I had to have all the original ticket stubs for the flights before I was re-routed.  I’d stuffed them somewhere…

After searching frantically through my giant tote bag and my pockets, I resorted to pouring all the bag’s contents on the floor while the people in line watched as I sorted through the jumble (pretty humiliating). But… I finally found those ticket stubs!

The window agent directed me to where the cruise representatives were located, and I raced there.

But the Celebrity rep informed me the last bus to the ship left half an hour earlier and I’d have to take a taxi.

In Spain. When I don’t speak Spanish. After the passenger embarkation deadline.

After I begged (it wasn’t pretty), she walked me to the taxi stand, put me in one and told the driver to take me to the port.

That was going OK, although it was well past 3:30, but then we hit Friday afternoon traffic. And sat. And sat.

To say I was beside myself was no exaggeration. I got my phone out and texted all my family members and friends, telling them I was literally about to “miss the boat.” Anything to take my mind off the harrowing situation.

At last, the traffic broke and my driver dropped me off at the cruise terminal. The good news was there was no lines anywhere — and, the bad news was it was 4:30 and the ship sailed at 5.

I was checked in, and assured I’d make the ship and that three other people were even later than I was. (Somehow, that wasn’t really comforting.)

When I got upstairs and located the gangway to the ship, a huge metal gate was pulled across it and locked.

Rushed back down the escalator yelling, “I can’t get on the ship! The gate’s closed!”

A man took mercy on me, and said I could enter via the crew gangway on ground level.

As we walked outside, a crane was lifting up a gangway. I waved my arms frantically and screamed for them to stop!

The crewmen standing nearby just stared at me.

At last, I darted through the doorway and got on the ship at 4:45, schlepping my tote bag and rolling my little carry-on suitcase behind me, sweating profusely. With 15 minutes to spare.

Headed to the purser’s desk (again), and they couldn’t believe my luggage had been lost two years in a row. (Believe me, neither could I.) After I told them how helpful the crew had been the previous year (and asked for a complimentary bag of toiletries; knew the drill from last year), they promised to contact the airlines and help me again.

When the purser’s office agent called the airline after the cruise departed, the airline told her I should’ve picked up my luggage at Heathrow — and it was still there.

Apparently when you fly abroad you have to get your luggage at the first foreign port, go through customs, then re-check the bag for the remaining flight(s). Crazy and inefficient, huh?

And nobody told me that.

This year, however, my luggage and I were reunited during the cruise!

I walked into my room the sixth night of the ten-night cruise — and there it was. 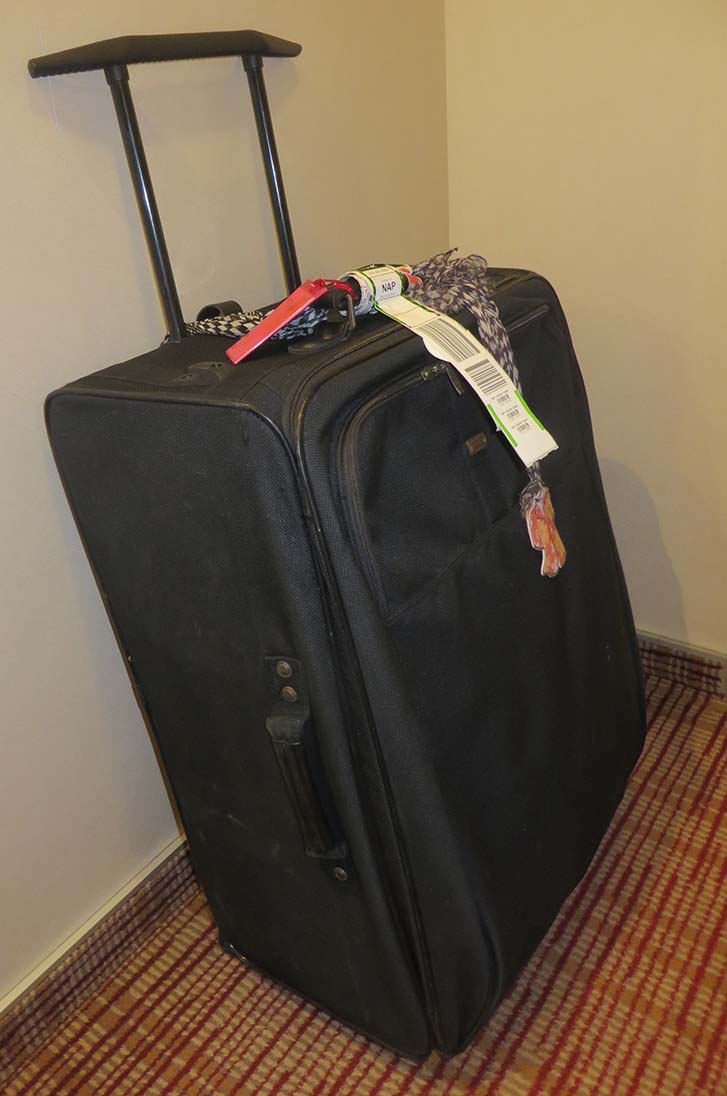 Fortunately, I’d packed the curling iron in my carry-on suitcase this time, and I was traveling alone so it wasn’t that big a deal to wear the same basic black traveling clothes five days in a row.

And it turned out that the lost luggage story was a good conversation starter every night in the dining room.