Posted on March 2, 2017 by blogqueendiane 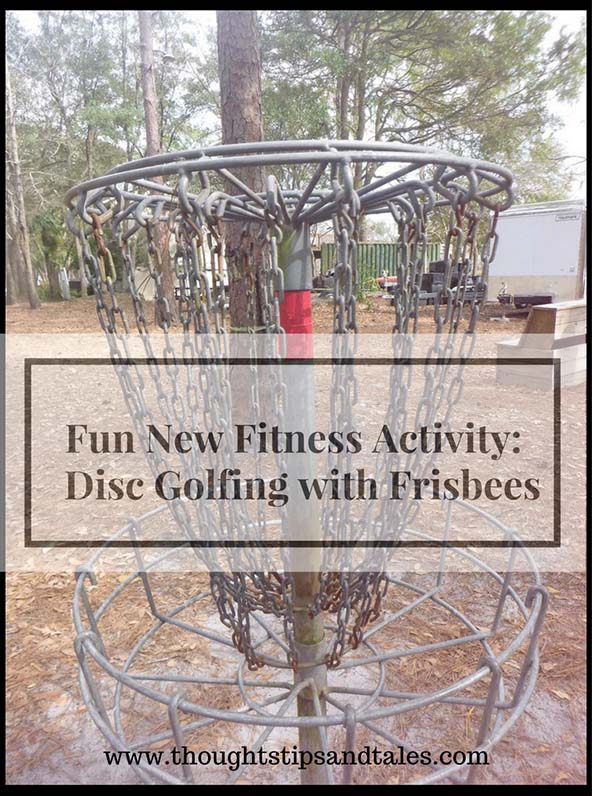 If you can walk and throw a frisbee, you can take part in one of the latest fitness activities — disc (frisbee) golfing!

There’s probably a course or two in your area — and this type of golf doesn’t require expensive equipment or costly greens fees, so it’s a sport the whole family can enjoy.

My friend Cindi and I went to a local course at Trophy Lake on John’s Island, South Carolina (near Charleston) to check out the lake and the disc golf course on a beautiful 82 degree Saturday afternoon (in February!).

The friendly man in the shop handed us each 3 discs (about 2/3 the size of regular frisbees) and explained that the thickest one was equivalent to a putter in golfing (for close throws) and the others were thinner and thinnest for long distance tosses.

The object of the game is to play 18 holes of “golf” by throwing discs down the fairway and into a metal basket-like device raised a few feet above the ground on a pole — ideally in three tosses or less (since it’s a par 3 course).

We were the only people on the course (which was great, because we’d never tried it before and had absolutely no idea what we were doing!), and we set out with a bottle of water and 3 discs apiece after taking a photo of the course displayed on a board outside the shop. 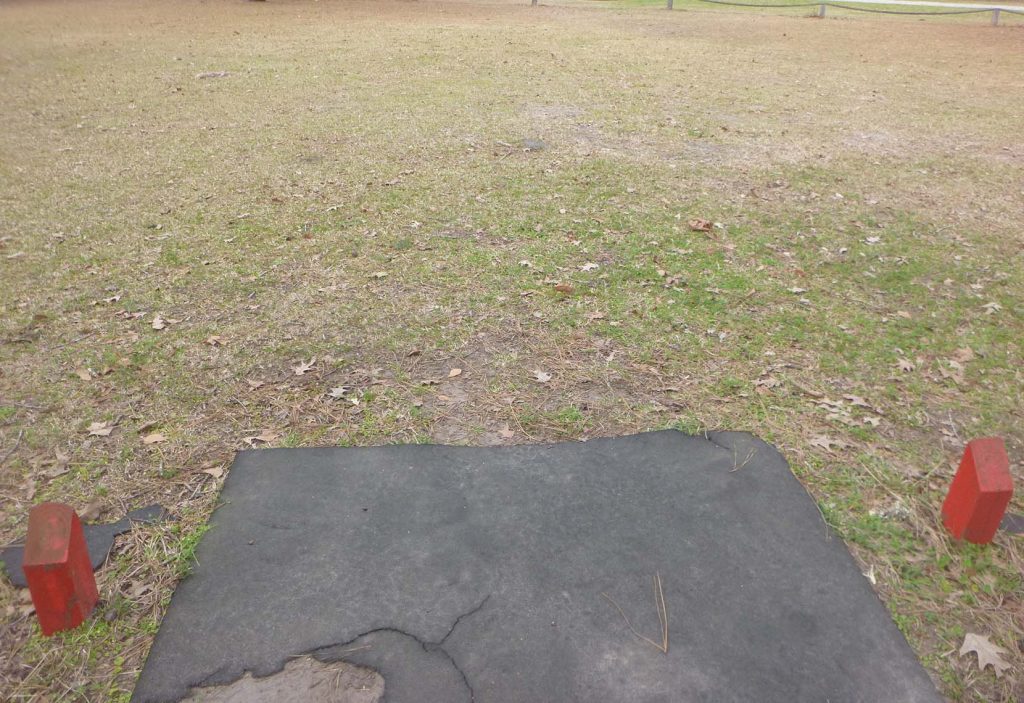 This course had, like typical golf courses, several tee mats for each hole — one with white markers for experts (furthest away from the target), a closer one with blue markers for intermediates and the closest one with red markers for beginners. 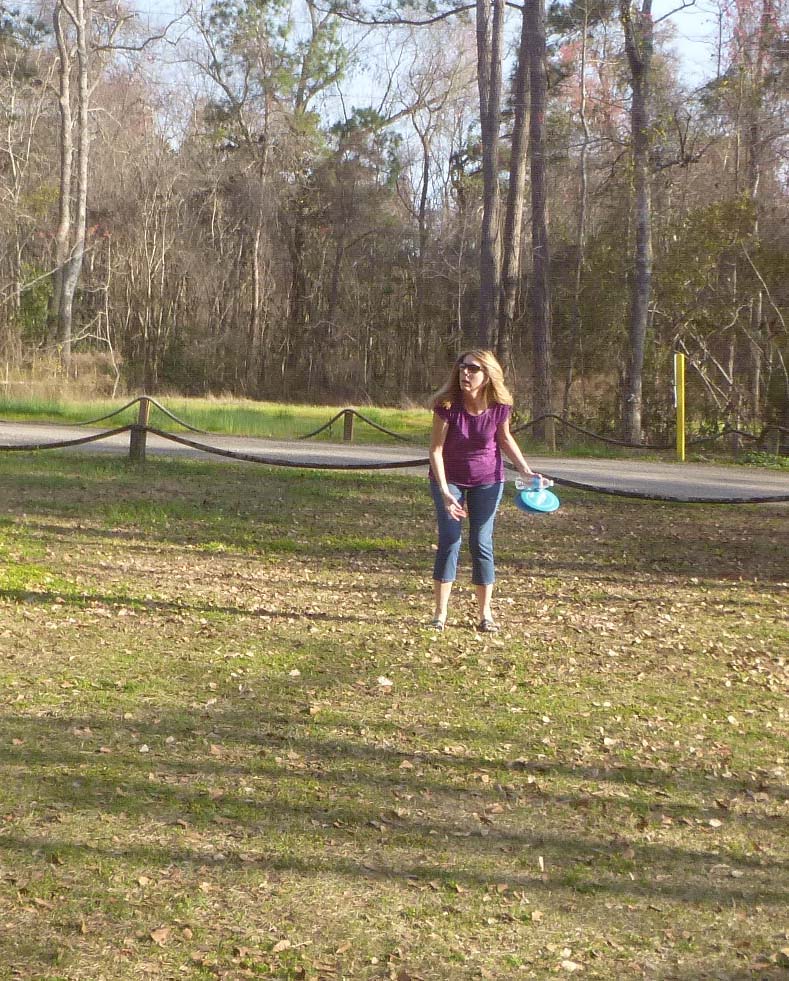 We used the mats at the red markers (of course), which was good because they were sometimes hundreds of feet closer to the baskets than the expert mats were! A few holes required golfers to toss the disc across a lake from the white mats (yikes), but were straight shots over grass from the red mats (unless the disc veered to the side and landed in the lake — and I’ll admit — we picked a couple of discs out of the water…).

At each hole, we flung our discs as far as we could and got to the target in somewhere between 5 to 15 throws. Unfortunately, nearly every throw arced to the left or right, and we never did figure out the secret to throwing  straight — but it was beautiful sunny day and a fun experience. 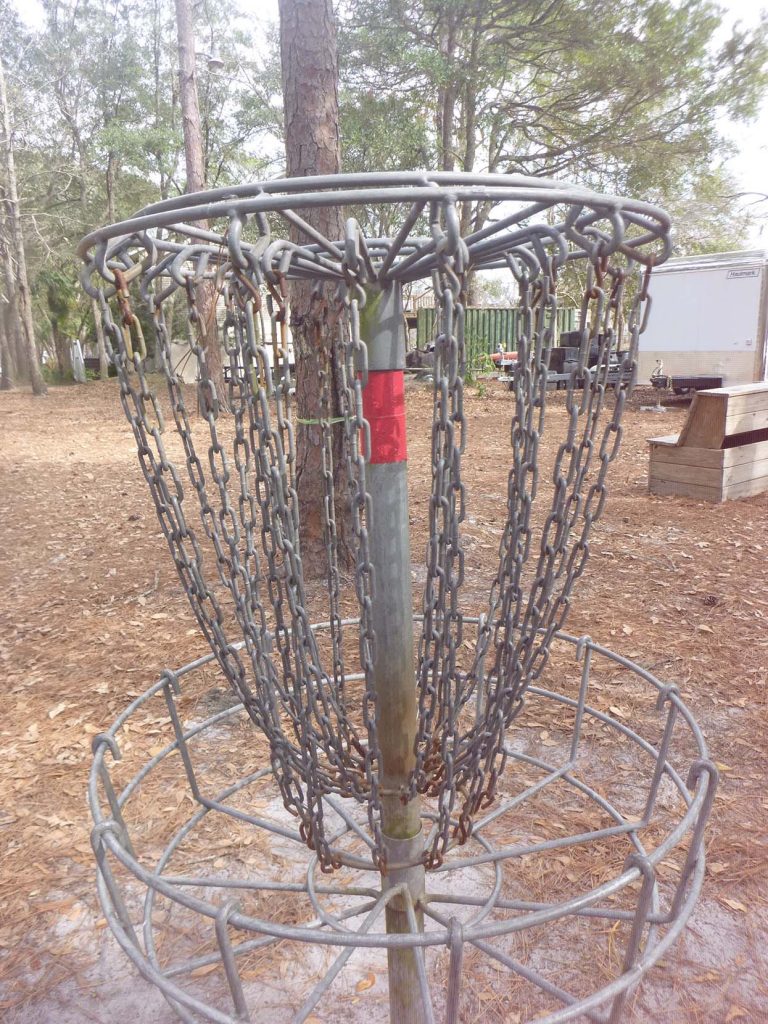 We liked the fact that the targets had a set of chains running down the center that immediately stopped the disc from flying out the other side once you got to them.

The biggest problem we had, though, was locating the next hole once we finished one. The signs on the markers — and the signs on poles or on trees — were few and far between, and the course definitely didn’t follow a straight line or a set pattern! We zigged and zagged all over the place, squinting to find the hole number and the metal targets — like a treasure hunt. (And we got over 10,000 steps on the Fitbit.)

Finally, in desperation, we brought out the cell phone with the course photo on it, enlarged it and referred to it at the end of every hole, which helped a lot. 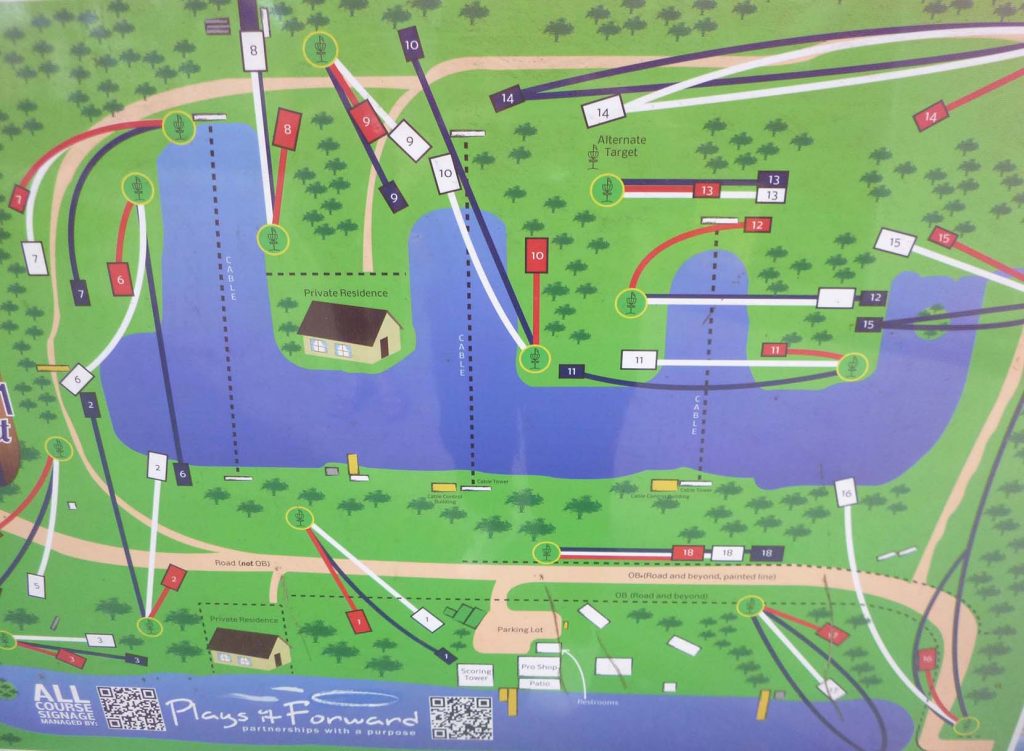 Hint: go to the website, print a copy of the course and bring it with you the first time you try disc golfing. If you can’t do that, be sure and use your phone to snap a photo of a course diagram. Also, bring a lightweight backback to carry the discs and a water bottle, because they’re sort of cumbersome to carry around in your hands.

Trophy Lake’s disc course was pretty — wooded, mostly shady, and in view of a huge lake most of the time. We saw a few fire ants, but no snakes or alligators! The trees did, however, present a challenge on a lot of the holes — and quite a few of our discs headed back in the direction we threw them from after boing-ing off tree trunks.

Maybe a lot of golfers suffered concussions from boomerang shots at one specific tee mat, because for some reason, the trees near that single mat were marked with giant red arrows! That made us laugh because there were hundreds of other trees on the course and only those two were marked. 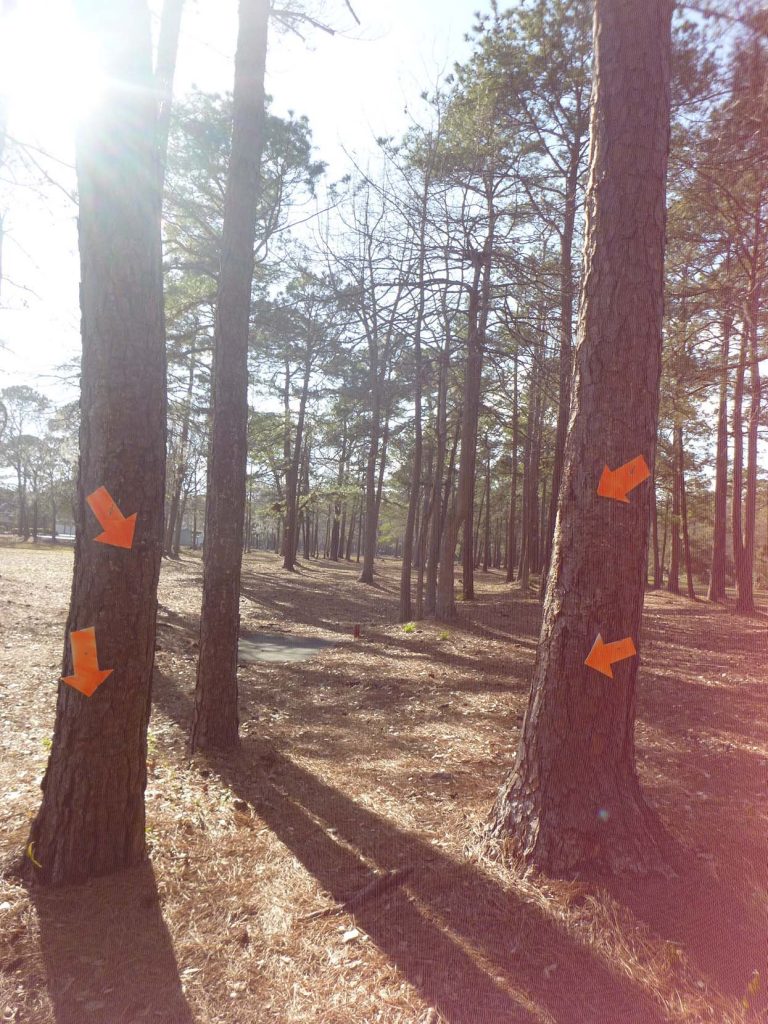 The target baskets were set up uniformly for the most part, but on one hole, for some reason there were two targets. One was down on the ground and looked like it’d collapsed in an earthquake or something, and the alternate target hung over our heads from a tree branch (and required us to stand on a stool to retrieve our discs). One other target sat at the top of what looked like a giant ant hill. Maybe they did that just to shake things up? 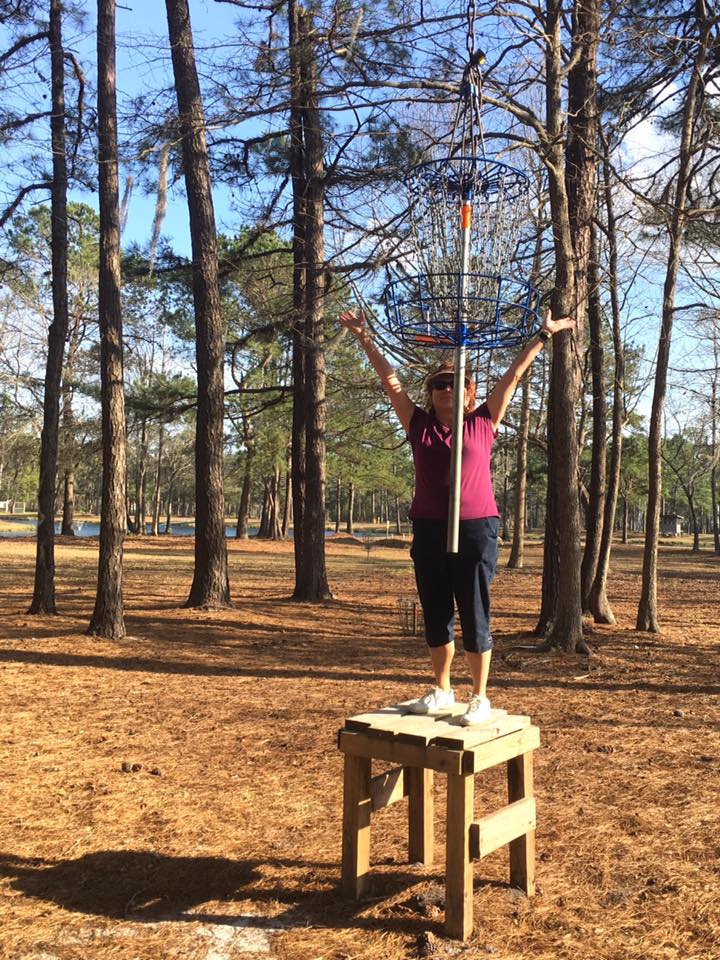 It was fun to be out in nature, get in a good walk and try something new and different — a good adventure. Give it a try!