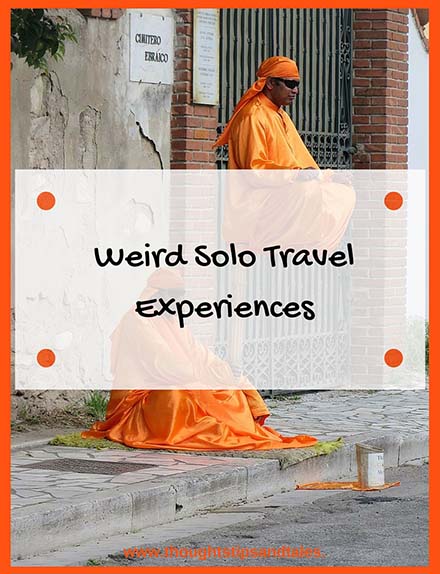 They say traveling is an adventure, and that’s definitely true.

These weird solo travel experiences occurred on a recent cruise to the Mediterranean.

The first adventure took place when I got to the airline check-in counter and the agent told me my suitcase weighed 61 lbs. — a whopping 11 lbs. over the limit.

I quickly moved away from the counter, opened the big bag on the floor and began frantically trying to remove things.  Out went the brand new bottle of sunscreen (available at twice the price on the cruise ship), face lotion, a pile of magazines, books and accessories. (What can I say? I have a Kindle and prefer holding paper in my hand. But I’m going to rethink that in the future…)

The airline woman came over, scooped up each group of items I removed, and took them to the scale to weigh them, so I could track 11 lbs., which was really nice of her. (I’m sure she also wanted to get my off the floor near her counter as quickly as possible, too.)

After three trips to the scale, she said I was ready to go — again.

Of course, I was also embarrassed and sweaty…

Then, after a lot of airport travel drama, the taxi I was in screeched to a halt in front of the cruise terminal in Barcelona and I boarded the cruise ship 15 minutes before it departed. But the big suitcase I’d painstakingly lightened up didn’t. It was lost (story here) — for the second year in a row.

At the after-dinner show in the ship’s theater one night, about 15 white-haired passengers in the front two rows stood up, turned around and simultaneously “shook their booties” at the audience.

On the shore excursion to the Leaning Tower of Pisa, a long row of vendors lined up near the entrance. There, two men were performing this “magic trick” in exchange for tips from big-hearted tourists.

It was very, very weird — but mesmerizing.

I watched them for quite a while and couldn’t figure how they did it.

When the cruise was over and the plane landed in my final destination, I got a ride home from the airport from an Uber driver (only my third Uber experience ever).

It was dark outside — near midnight — and for safety reasons, I was hoping the driver wasn’t a male. But it was. A big, burly male.

So, I was a little freaked out but tried not to show it.

The driver was talkative, and although I was beat after traveling 24 hours on international flights, I thought it was a good idea to be responsive and nice (so he’d be less likely to drive me to a desolate site and kill me).

Finally made it home, and when he pulled to the curb, I jumped out. However, he insisted on bringing my (previously lost) suitcase from the trunk to the front door.

When we reached my pitch-dark front porch located behind an enormous magnolia tree which hid the house from the street, he slowly raised both arms over his head…. and (OMG, he’s going to stab me in the back!) … gave me a big hug, saying, “Welcome home!”

My heart was pounding like crazy when I scampered in the house and firmly pulled the door shut and locked it behind me.

Whose Uber driver hugs them?!

“Traveling – it leaves you speechless, then turns you into a storyteller.” – Ibn Battuta