Posted on November 29, 2016 by blogqueendiane 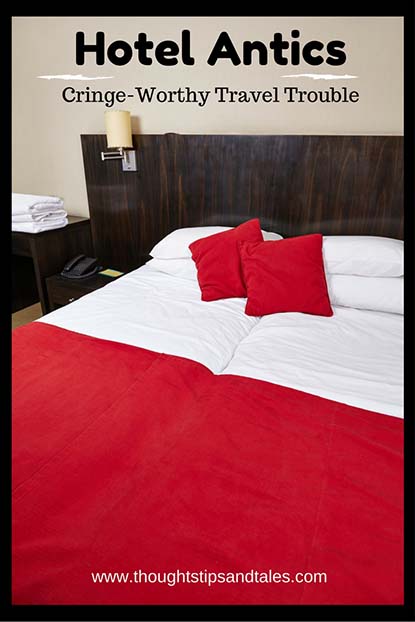 In magazines and on TV, people take trips and relax in peace and quiet in their well-appointed, spacious hotel rooms with all the comforts imaginable. They come and go, full of smiles, on interesting outings and loving visits to family members.

Unfortunately, some of my hotel experiences have been the polar opposite.

#1 – My last hotel stay came about because I had to evacuate for Hurricane Matthew. I stayed in a nice-enough hotel with a kitchenette in a suburb of Columbia, South Carolina, for five nights. After work the day I left, I quickly stashed all the “potential hurling projectiles” in my yard in the garage and packed all the valuables I could in my crowded car. Drove 5 1/2 hours for a destination that normally takes 2 hours, encountering bumper-to-bumper traffic and road construction in the dark, and arrived, exhausted and stressed, at 2 a.m.

The hotel clerk gave me a key, but when I hauled two rolling suitcases, a cooler and a huge tote bag up to the third floor — bone tired and slightly creeped out from having to evacuate alone  — it wouldn’t open the door.

Dragged everything back down to the check-in desk and she gave me a key to another room.

After hauling everything back up to the third floor, the door opened — but it looked like someone was living in the room. The bed was unmade and unkempt, used towels were on the bathroom floor, etc. (At least there was no burly, naked man in the bed.)

I called the front desk this time — tired of hauling stuff up and down — and the clerk came up and agreed the room looked unclean — and possibly occupied.

I let her trek back to the check-in desk this time and bring me another room key. It turned out #3 was the magic key to a clean, unoccupied room…

Where I spent the next five days glued to the Weather Channel, with once-a-day trips to the Walmart across the street or the Ollie’s Discount store next door. (All the clerks and customers there were talking about the hurricane hitting there.)

It was not fun. It was not magical. It was really, really dull — and set me back $739 for the “unplanned vacation.” My friend and her husband did arrive on the next to last day, so I finally had someone to kill time with.

#2 – On a truly fabulous cruise to the Mediterranean with one of my best friends, we ended up spending the night in an $847 hotel room in Venice. (We thought it was $424 total when we booked — not $424 per person.)

The hotel was ornate and amazing, and located on a Venetian canal. However, when we returned from a 99 degree 14-hour day of sight-seeing, ready to relax after a refreshing shower, neither one of us could figure how to turn the shower on. (Was there some Italian secret?)

At 11 p.m., we finally gave up and called the front desk, who sent a surly, non-English speaking maintenance person to the room. After describing what we needed in sign language, the man immediately walked into the bathroom and turned on the shower, shaking his head and mumbling in Italian to himself.

Pretty humiliating, but we were determined to use the shower in the highest-priced hotel room of our lives!

#3 – I took an eight-hour road trip last summer to visit another of my best friends, who’d moved to the Atlanta, Georgia, area. Was freaked out about driving the seven-lane roads around Atlanta, so I left her house for home at 5 p.m. Sunday afternoon and drove at a non-peak time (so many cars even then!), stopping at a hotel just outside town to spend the night and finish the trip home the next day.

Everything was fine and I was sleeping soundly, relaxing from having made it without incident around the big city, when the smoke alarms went off in middle of the night throughout the hotel.

Looked out the bedroom window, which was on the third floor above the entrance, and saw a fire truck outside the front door. That wasn’t a good sign.

Threw on some clothes and walked out in the hall to see what the (now-awake) people in the neighboring rooms knew.

We didn’t evacuate outside (yay!) because the word got around that the assistant manager heated up his snack a little too long in the microwave, causing smoke to trigger the alarm. Grrr.

The fire truck eventually pulled away from the entrance, but it took me two hours to get back to sleep.

In the morning, I politely explained to the check-out clerk that I didn’t get the restful sleep that I’d paid for, and asked for a discount on the price of the room. And she gave me half off the price! ( It doesn’t hurt to ask.)

#4 – During the years my son was growing up and I was a poor single mother, we had to make several “unplanned vacations” to evacuate for hurricanes.

The most infamous was the one where we packed the car to the brim with our life’s possessions, drove four hours to another state, and each rolled a suitcase into the hotel. One of the super-stuffed suitcases burst wide open on the sidewalk ten paces from the car, spilling out all the contents. We ended up having to stuff everything back in and carry the suitcase upright with our arms around it the rest of the time.

#5 – The most expensive unfortunate hotel stay occurred on a Carnival cruise ship vacation.

Years ago, I took a much-needed cruise to the Caribbean, springing for a balcony room and planning to read a pile of books and watch the waves from the balcony for seven relaxing days.

But that was not to be.

On the “party ship,” two 30-ish cussing, loudmouth men spent the whole week banging on the walls at 4 a.m. and yelling rude things off the balcony at all hours of the day and night for the whole cruise.

I called the front desk three times, but by the time the ship representative got to the room each time, the men had stopped — and the ship people told me they couldn’t speak to the occupants next door to ask them to be quiet unless they actually heard them being noisy.

After the third unsuccessful attempt to chill on my balcony and call to the front desk, I gave up.

At the same time, the people in the room to the right of me were out on their balcony with their friends every day, smoking and talking loudly when the men in the room on the other side weren’t acting like animals.

Looking at the bright side: There’s always another vacation and another hotel room. They can’t all be bad!