South American Cruise: Ushuaia, Argentina — the End of the World 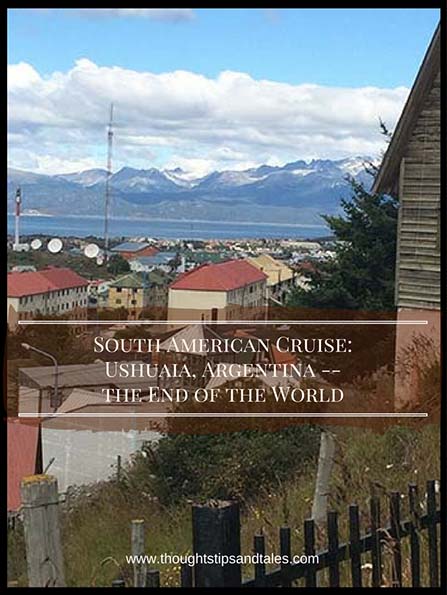 If you occasionally have a bad day and want to take off for the “end of the earth,” Ushuaia, Argentina, is the place for you. It’s the last city on the southernmost tip of the South American continent, followed only by water and the continent of Antarctica.

On my cruise around South America, the shore excursion I looked forward to most was the scenic Drive to the End of the World to the tip of  South America on the Tierra del Fuego archipelago.

I got up at 5:45 a.m. (on vacation! that’s earlier than I wake up for work!) and went to the shore excursion meeting place in the ship’s theater. My friend and I couldn’t get on this popular tour at the same time, so I booked the morning excursion and she was scheduled to leave in the afternoon.

Unfortunately, after sitting there reading a book with a lot of other passengers for more than three hours, we were told there had been “an issue” with the ship to shore tender boat, and my long-awaited excursion was cancelled.

Those of us scheduled for it were allowed onto the tender to go ashore before the other passengers, though.

So I set off to explore Ushuaia on my own. 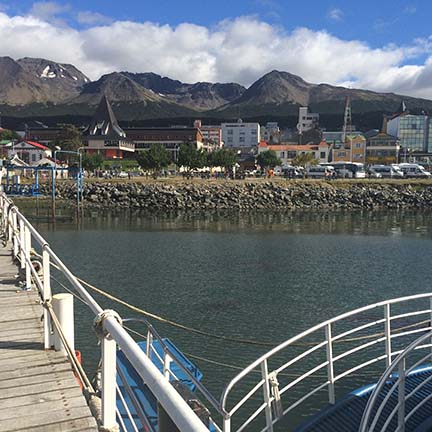 The town was charming, with the beautiful, calm bay and rocky shore, and blue skies, fluffy clouds and huge mountains behind it. It looked a lot like Switzerland because many of the houses were A-frame style! (This was not at all how I pictured the “end of the world.”) It also reminded me of the scenery from The Sound of Music movie. 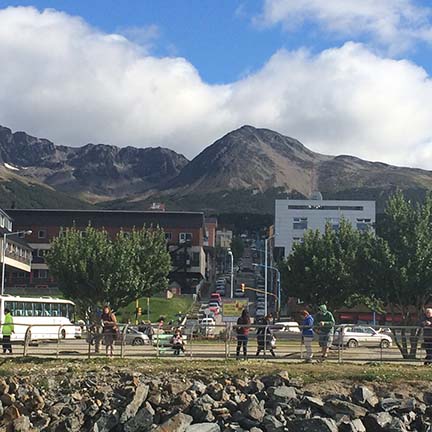 I wandered around the town square a while and then located the shopping area, where I spent hours checking out stores for potential souvenirs.

Also took a city bus tour, which gave a nice overview of the area. Learned that in the late 1800s, a prison was built and populated in secluded Ushuaia, and the prisoners built the town. 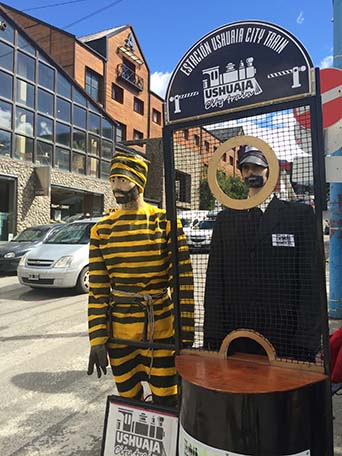 Then I decided to go to lunch and ended up at The Hard Rock Cafe! Am not an adventurous diner and figured they’d have hamburgers there — which they did. 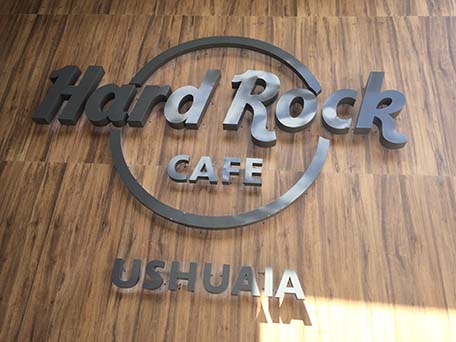 I tried to ask the Spanish-speaking waitress not to put mayonnaise on the burger, and didn’t know how to say it with my limited Spanish, so I kept saying “No blanco (white)” and used sign-language to mimic someone spreading something.

Well, she brought the manager (who spoke English) over and my message was conveyed. (I found out later the Spanish word is nearly identical to the English word; too bad I didn’t know that then…)

Have to admit that the “presentation” of the hamburger was very interesting! 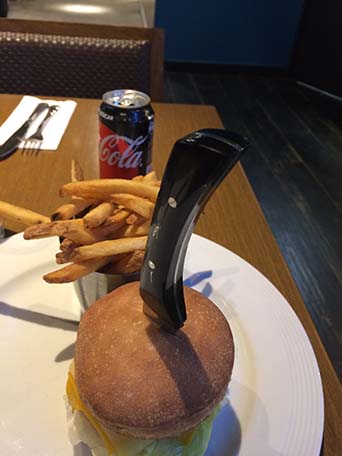 The signs around Ushuaia were fun — lots and lots of penguins! 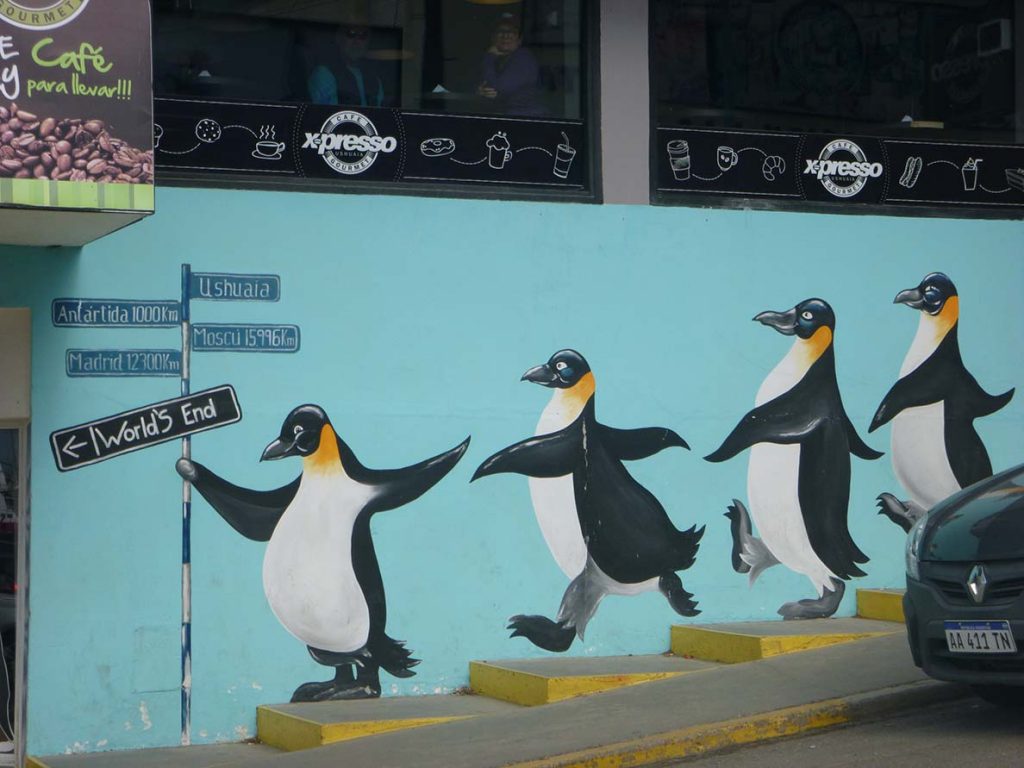 The stores all had penguin hats and a lot of other penguin and Antarctic accessories. 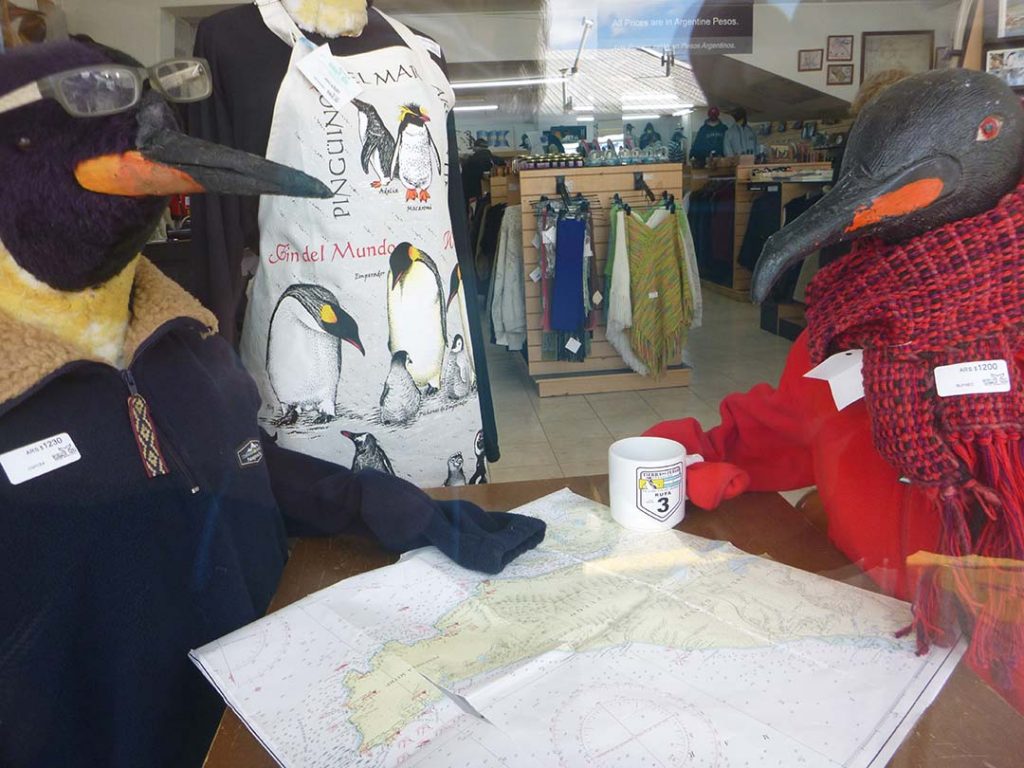 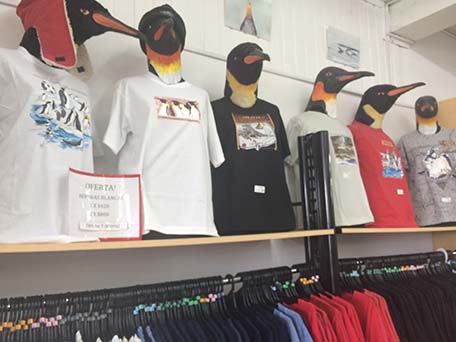 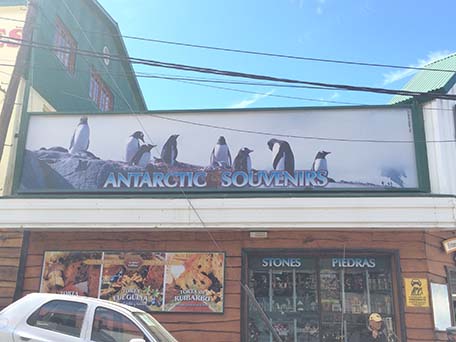 Many signs said “Gateway to Antarctica.” Princess cruise line actually offered a helicopter flight shore excursion for one day in Antarctica — for a mere $3,500! — and we met two people who planned to go. When we talked to them later, they said the trip was cancelled due to bad weather and they ended up going to the same place the tour bus took my friend, who did get to drive to the end of the world that afternoon.

Missing the ship tour turned out to be fine for me, though, because I had a fun day exploring Ushuaia — at the end of the world.

2 Responses to South American Cruise: Ushuaia, Argentina — the End of the World