Amazing Copenhagen on a Baltic Cruise 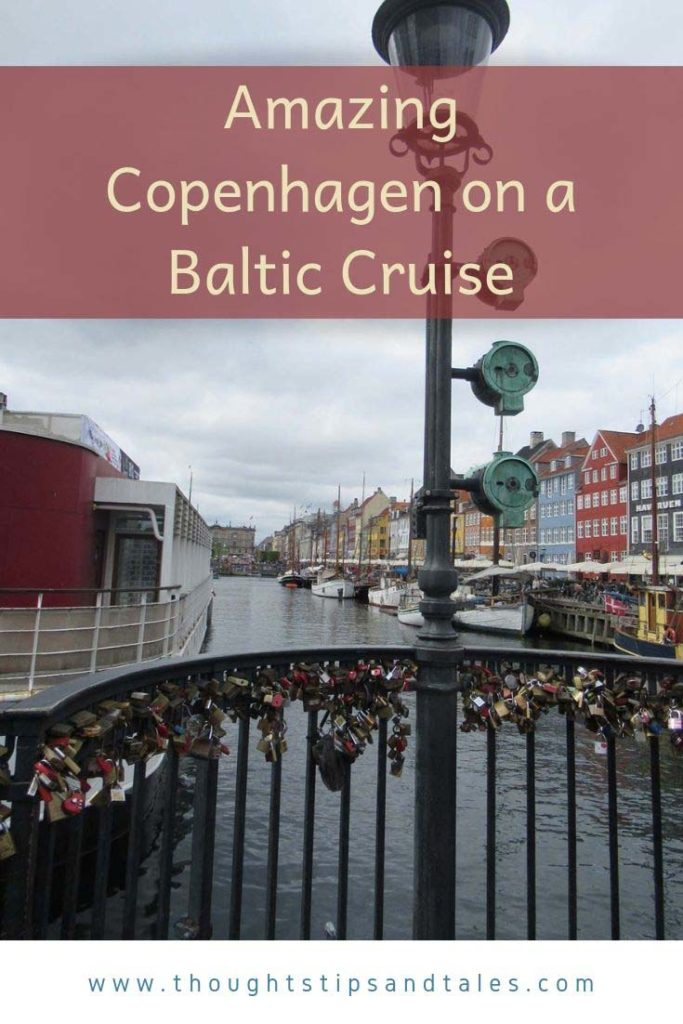 My friend and I took a two-week trip to the Baltic in May on the Regal Princess, and this was the first time it ever snowed on a cruise!  Copenhagen was amazing, Russia was COLD — and, as always, it was a fun adventure. 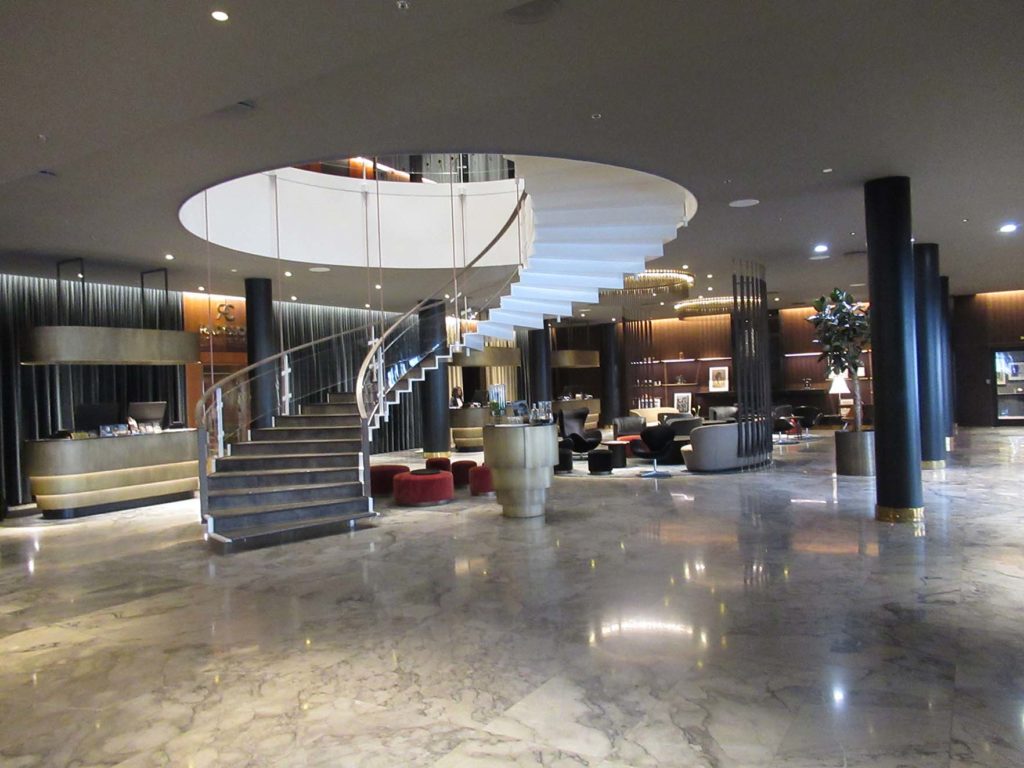 We flew to Copenhagen — and arrived with all our luggage (unlike previous years) about 9 a.m.  Took a transfer to the hotel we’d booked through Princess — the Radisson Collection — which was lovely and within walking distance of renowned Tivoli Gardens. And it had a Hop On/Hop Off bus stop right outside the front door. Sightseeing doesn’t get much more convenient than that! 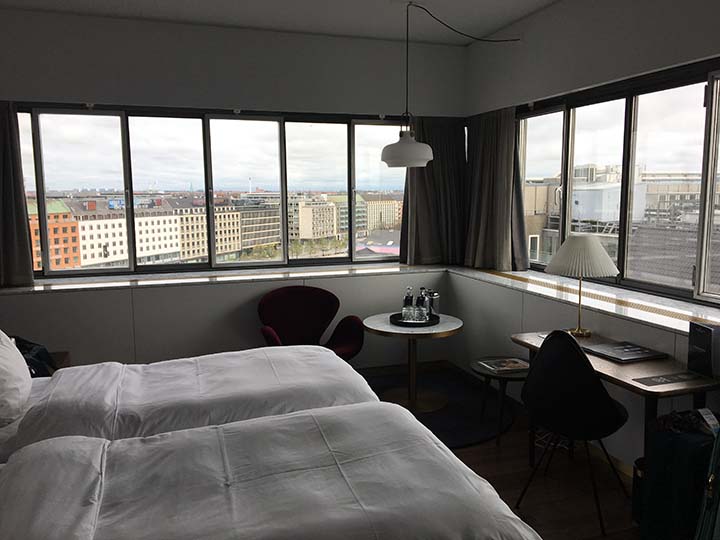 We checked in to our fabulous corner room on the 8th floor, which was very Scandinavian minimalist — with big, beautiful windows on two sides in the main room and large, low windows in the bathroom. (Even after closing the curtains (they only had sheers), couldn’t quite get over the feeling that if anyone was in the window of the  buildings next door — they’d probably see right in…) 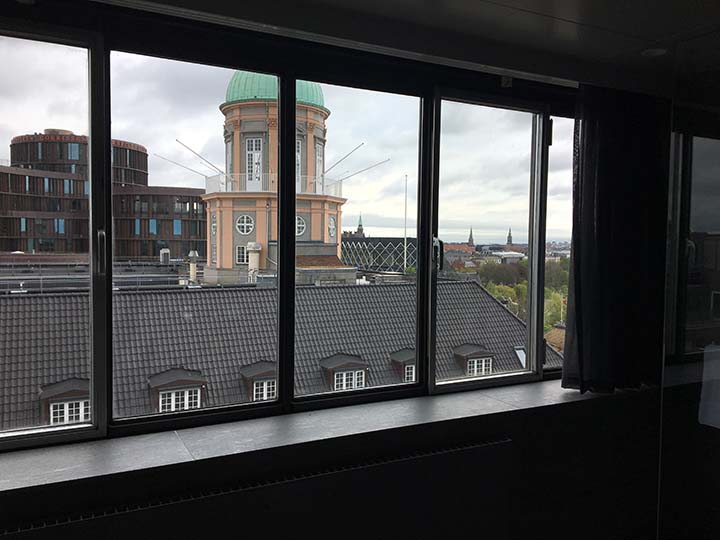 We wanted to see all the sites possible that one day and our goal was to stay up until at least 8 p.m. their time to get our sleep cycles back in sync, so we set up for a marathon day of sightseeing. 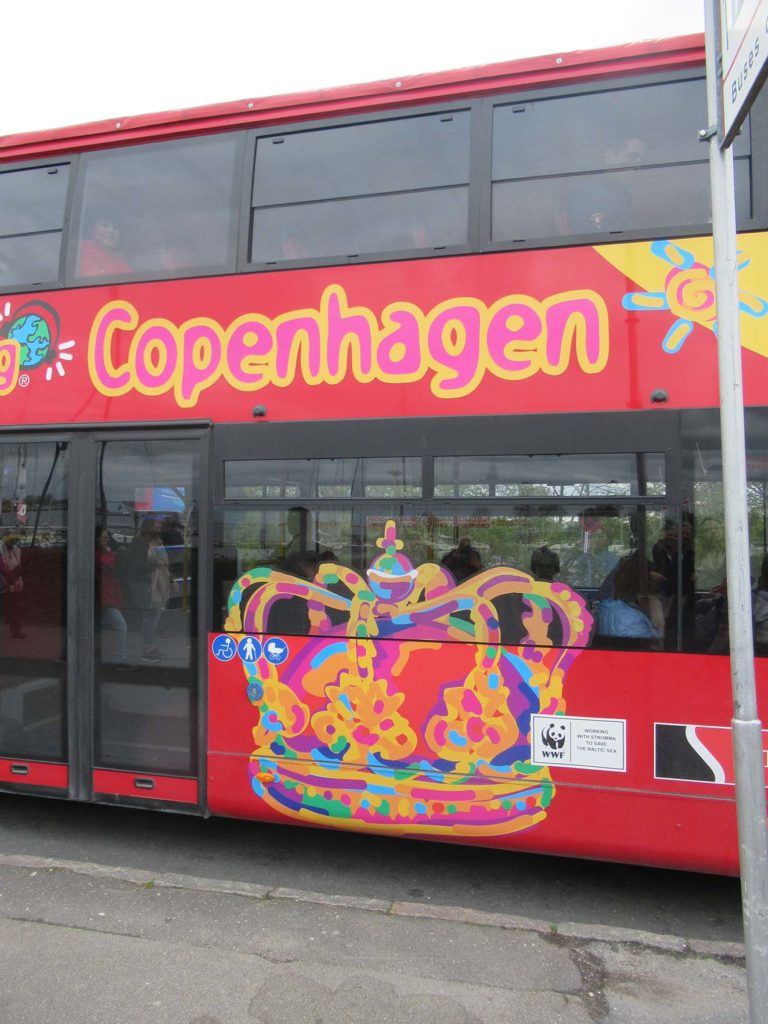 I’d bought tickets from AAA at home for a combination of the Hop On/Hop Off bus, Copenhagen canal boat tour and Tivoli Gardens for about $60 each and it was well worth the money since those were the big things we wanted to do and see.

We took the bus to where the canal tours began (which was pretty easy since a Princess cruise rep inside the hotel lobby gave us advice and maps of the city). We boarded a big, low boat right away and saw some of the same sights we’d seen on the bus from the water. 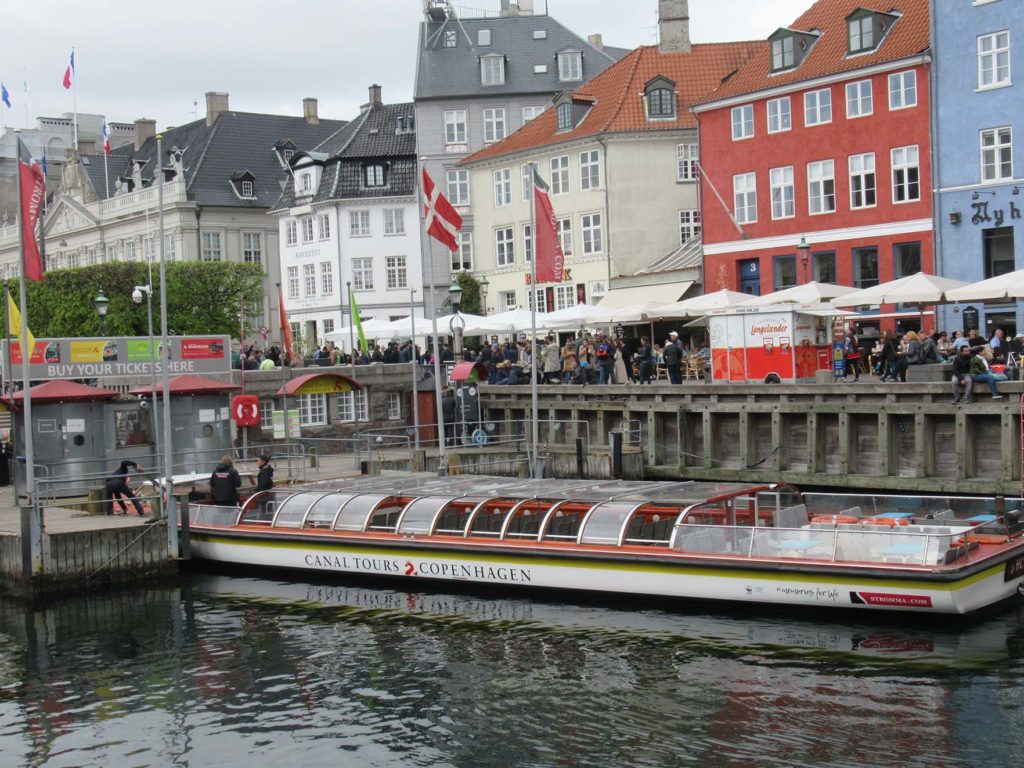 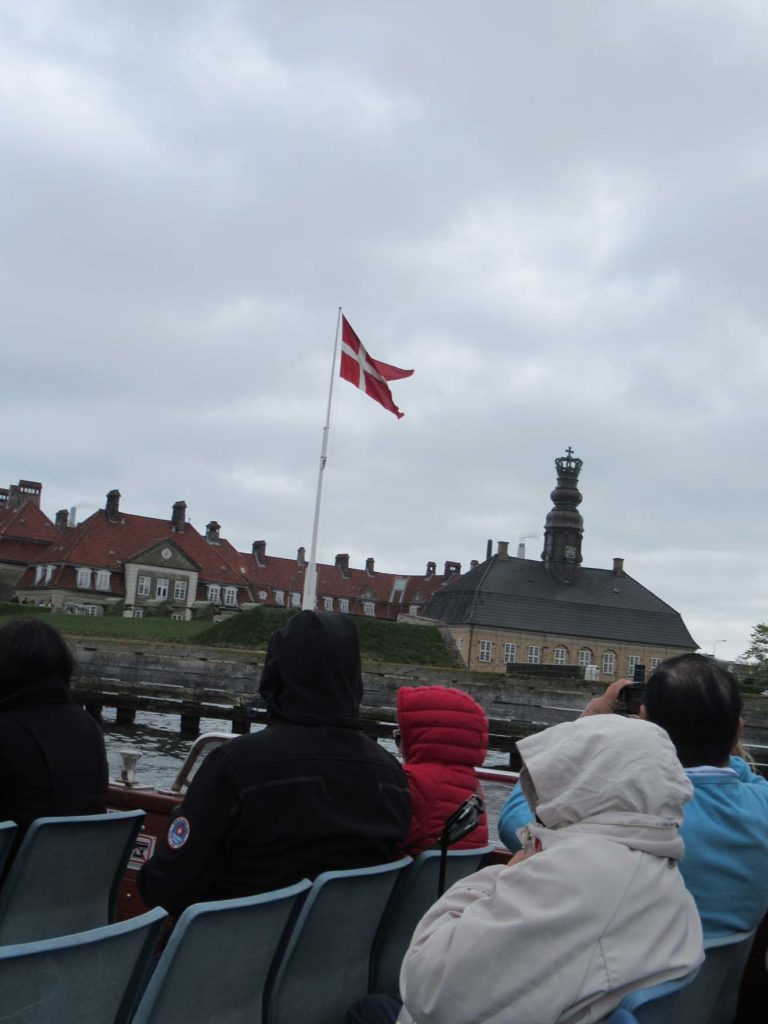 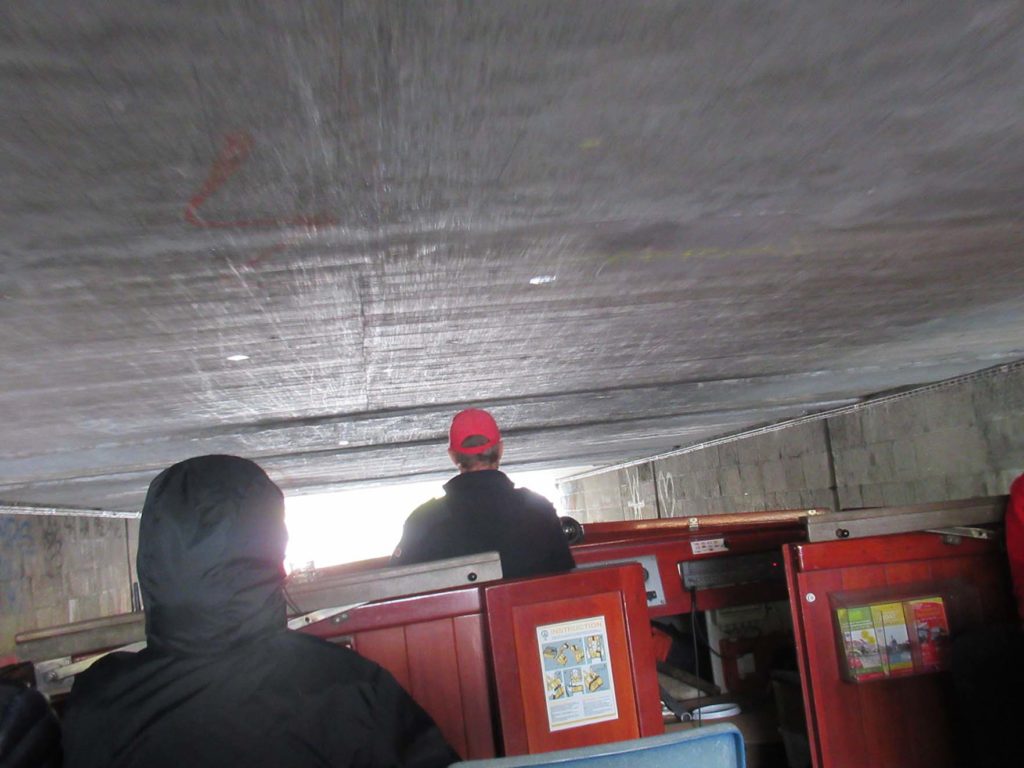 Copenhagen has many, many low bridges, and the boat narrator had to warn everyone to sit down when we went under every one of them …

The weather was very chilly – in the 40s, I’d guess – all day, and the boat ride was really cold. So glad we had thick winter coats with hoods! 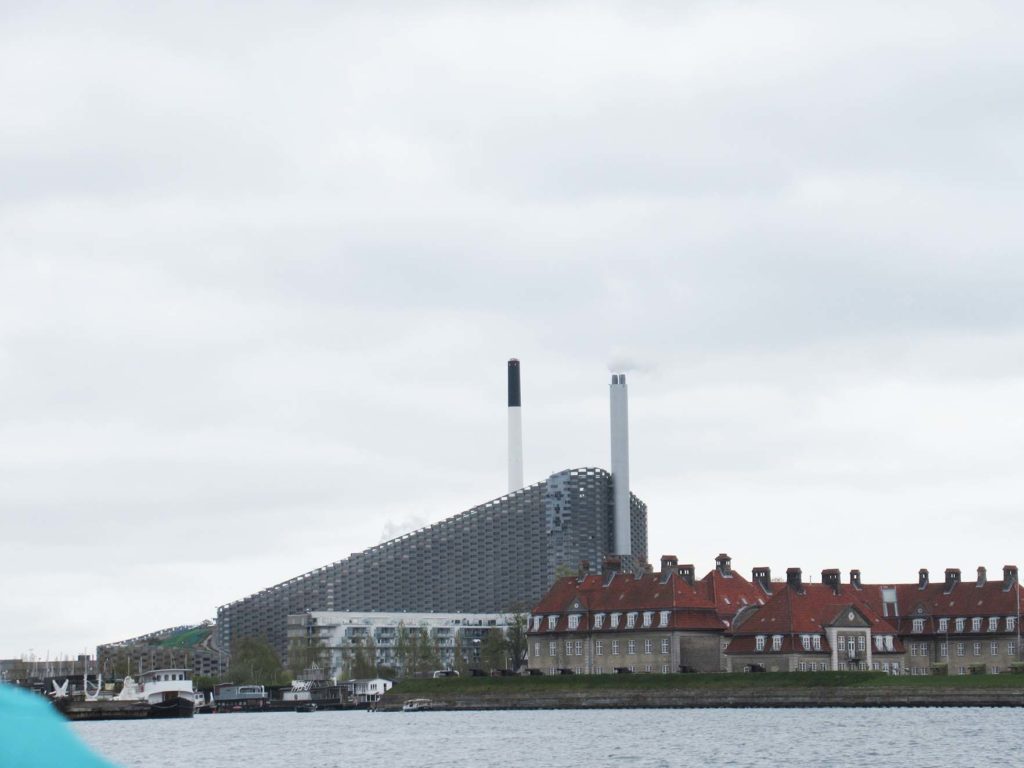 The guide gave interesting talks about the major buildings, and my favorite was the enormous, modern-looking incinerator plant where trash is burned. He said a public ski slope was being built on its long, steep, sloped roof and was nearly complete! (Afterwards, it occurred to us maybe he was joking, but I looked it up on my return and it’s true. In face, the ski slope has opened! Check it out here and here.) 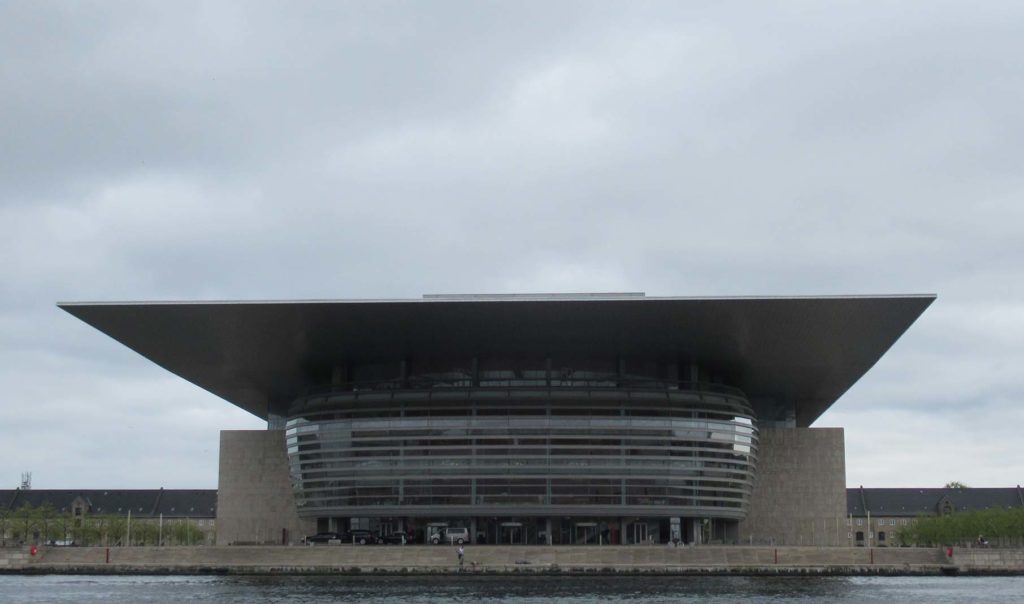 Another impressive building was a large, modern opera house on the water; the guide said professional divers participate in an annual diving competition from the roof (which was very high)! (Looked that one up later, too, and, yes, it was true.) 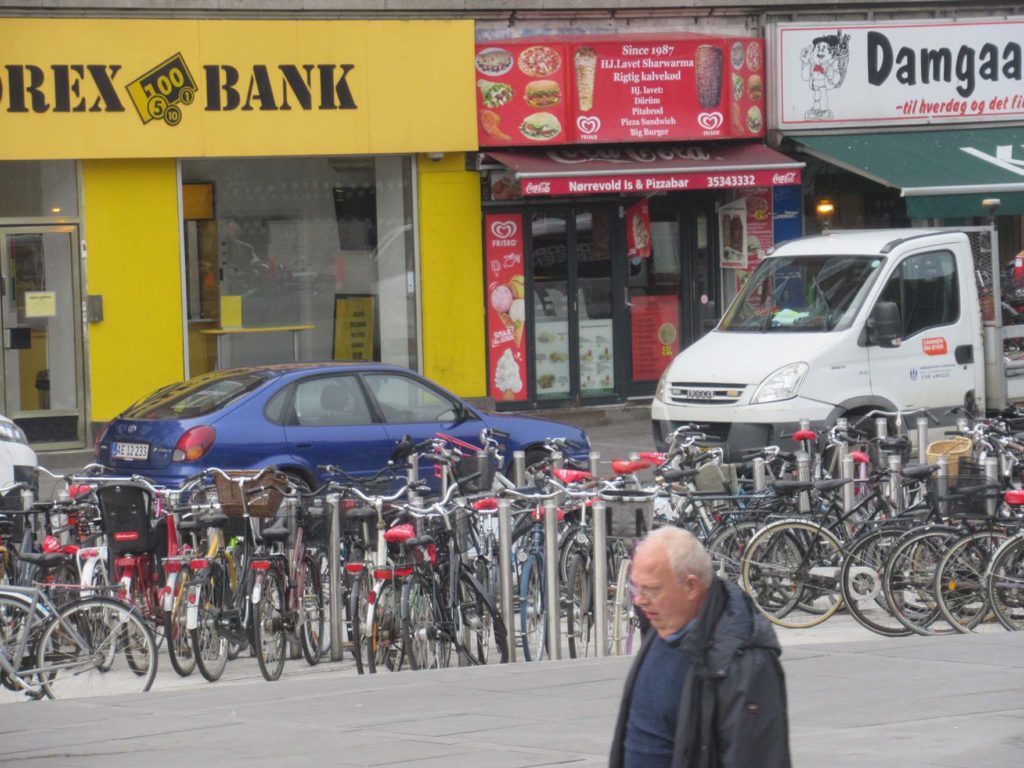 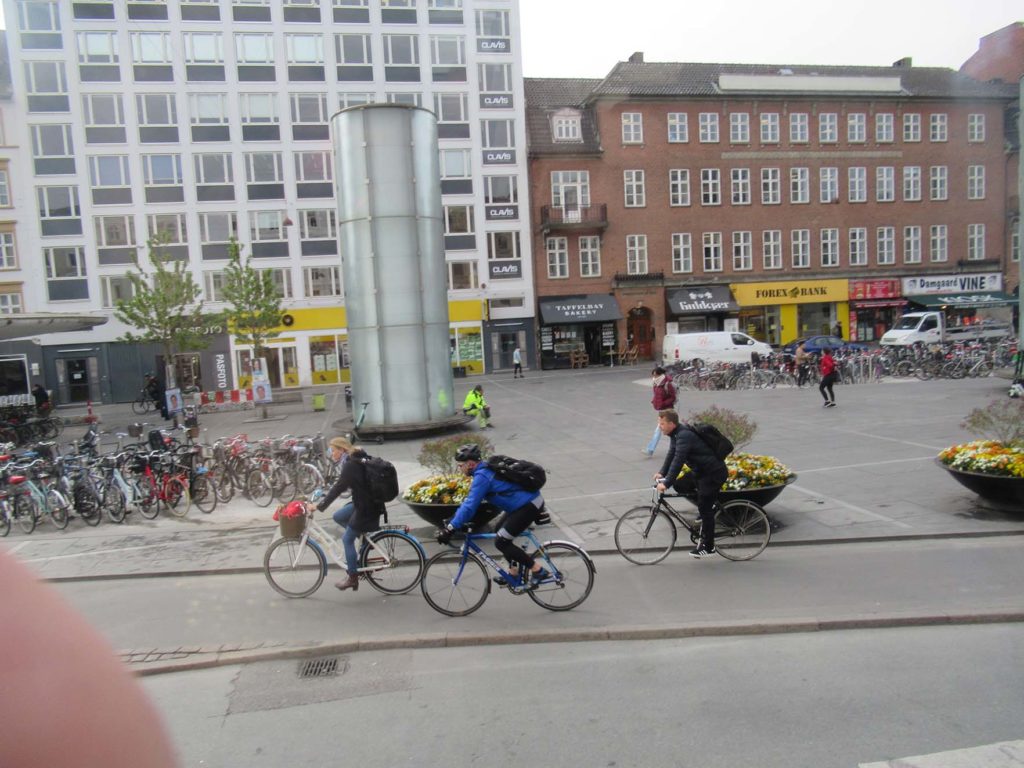 Those two buildings — and all the hundreds of people riding bikes all over the city in designated bike lanes — drove home the fact that Danish people are hardy outdoors-lovers who don’t let the weather, or anything else, stop them from being healthy and keeping fit.

It was amazing that in downtown Copenhagen, there was hardly any traffic. (Here’s a view from the hotel window.) 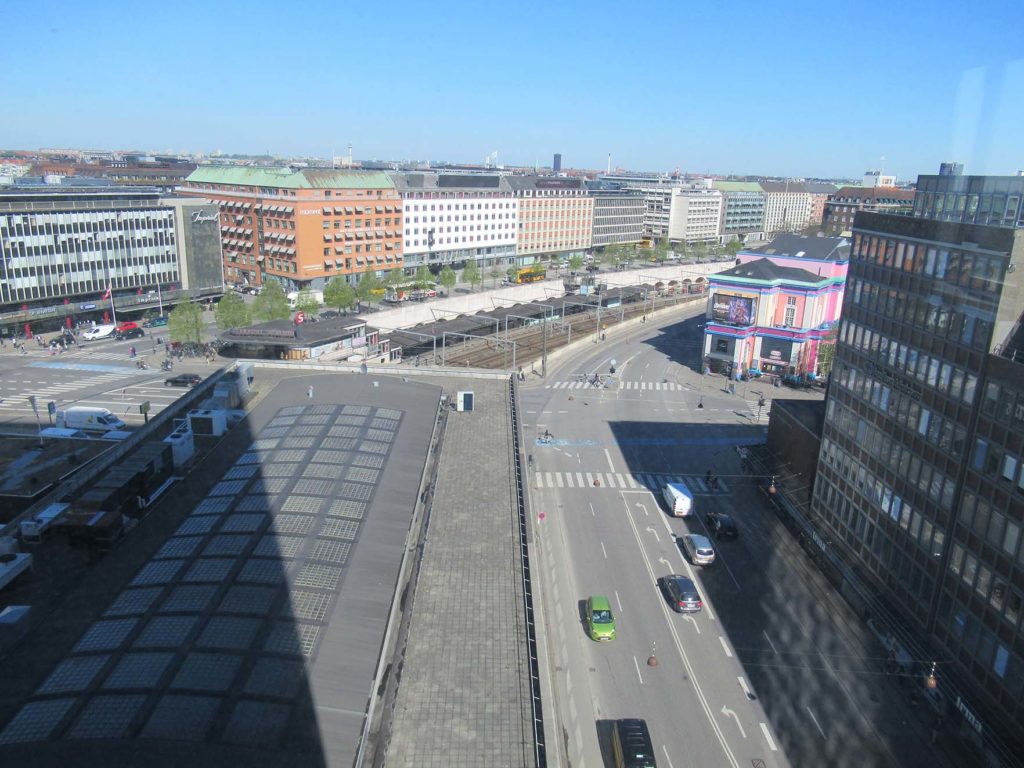 The buildings in Copenhagen are a mix of ornate, old buildings and sleek,  modern, glass fronted buildings. 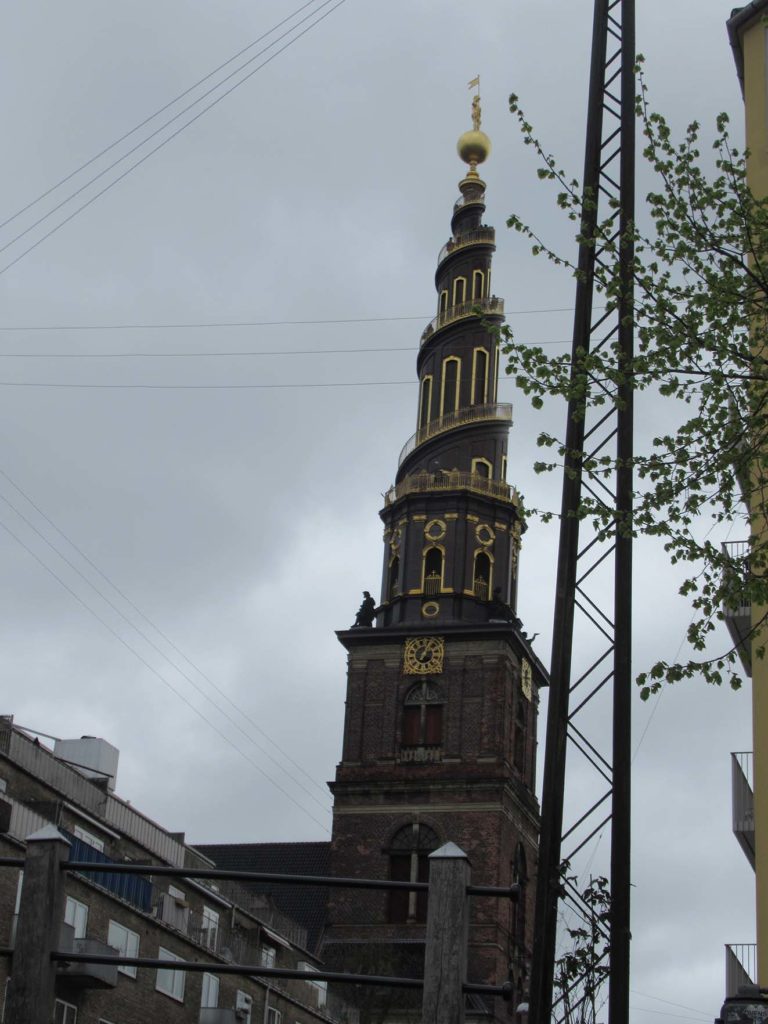 One of Copenhagen’s most famous buildings — Church of our Savior – is stunningly ornate, and has a gold steeple with an external spiral staircase that winds counterclockwise to the statue of Christ on top. 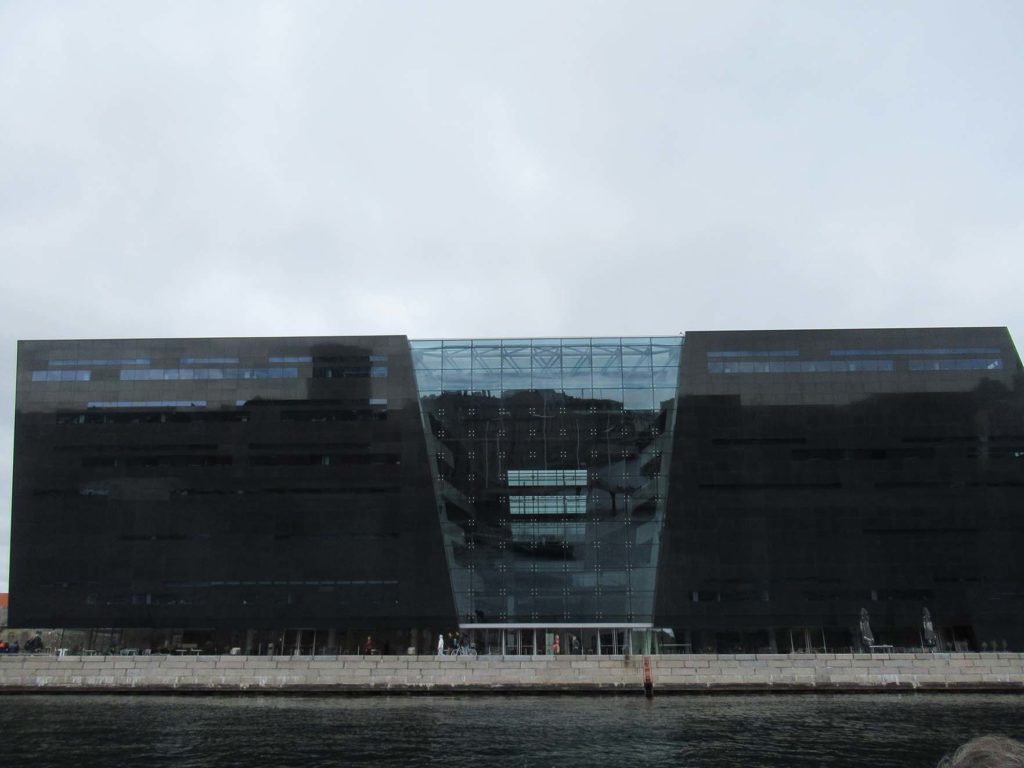 At the opposite end, a modern, angular, secular building known as the Black Diamond is located on the waterfront; it’s an extension to the public library and houses many other public offices, as well. 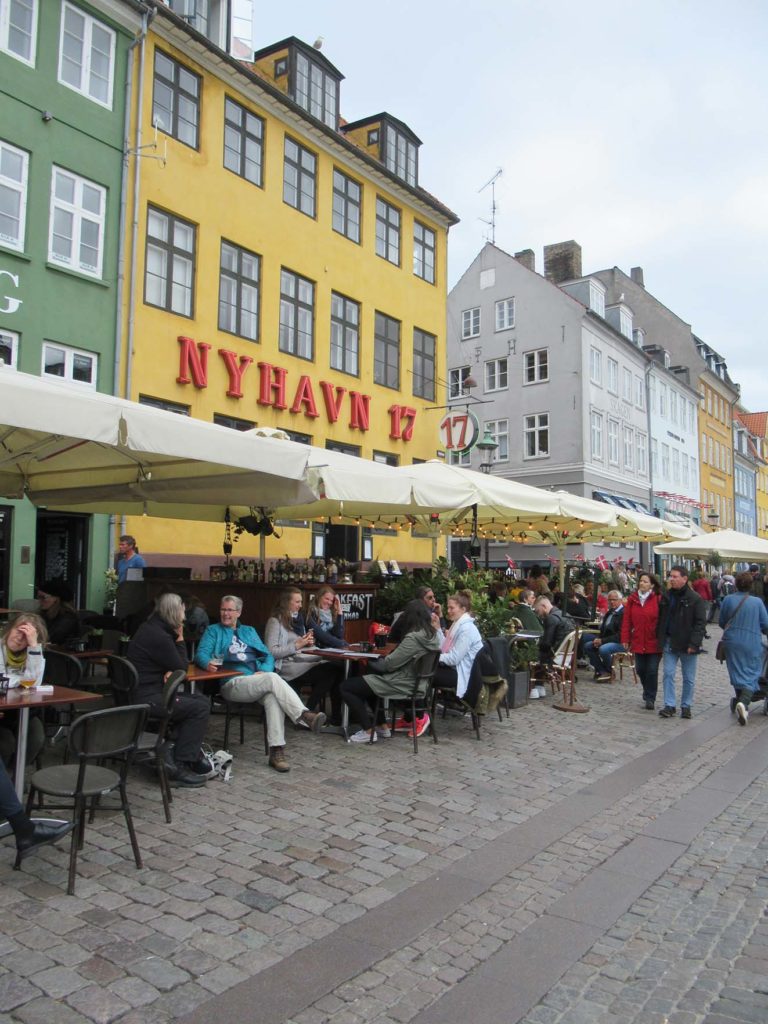 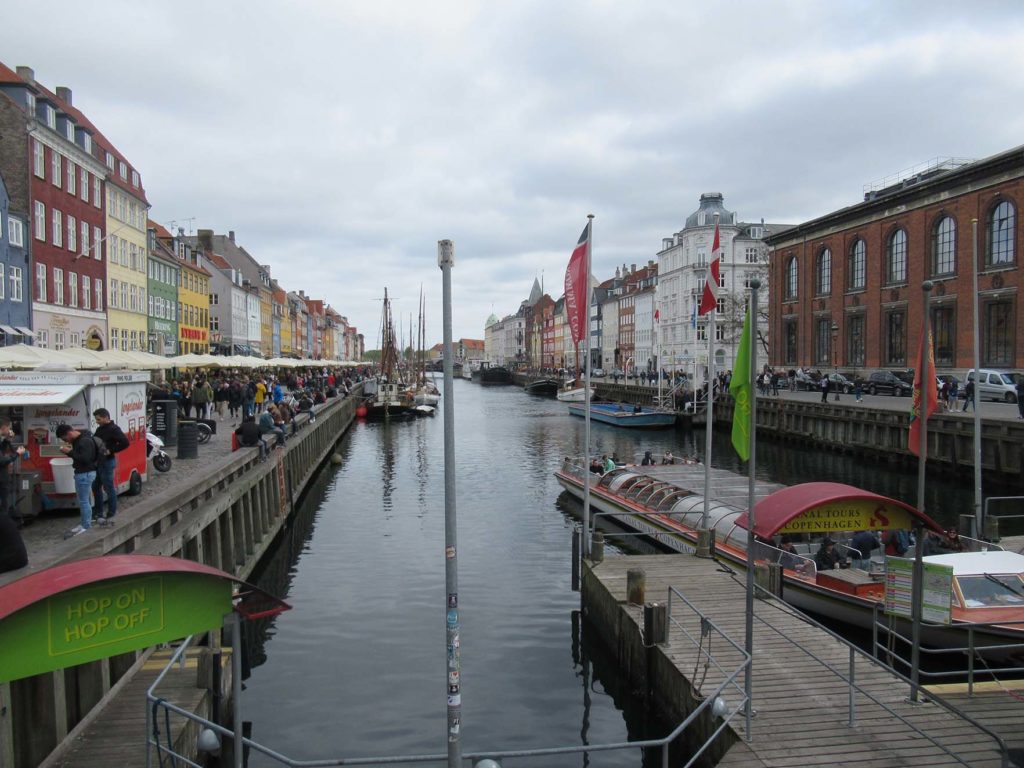 Our favorite buildings, though, were in a tourist section of town called Nyhavn – streets along a canal with various-colored townhouses on each side in an entertainment district with  cafes, bars with lots of outdoor seating.

The oldest townhouse dates to 1681, and  Hans Christian Andersen wrote “The Princess and the Pea” when he lived in one of them. Picturesque sailboats are moored on the waterway and the area looks like a postcard. 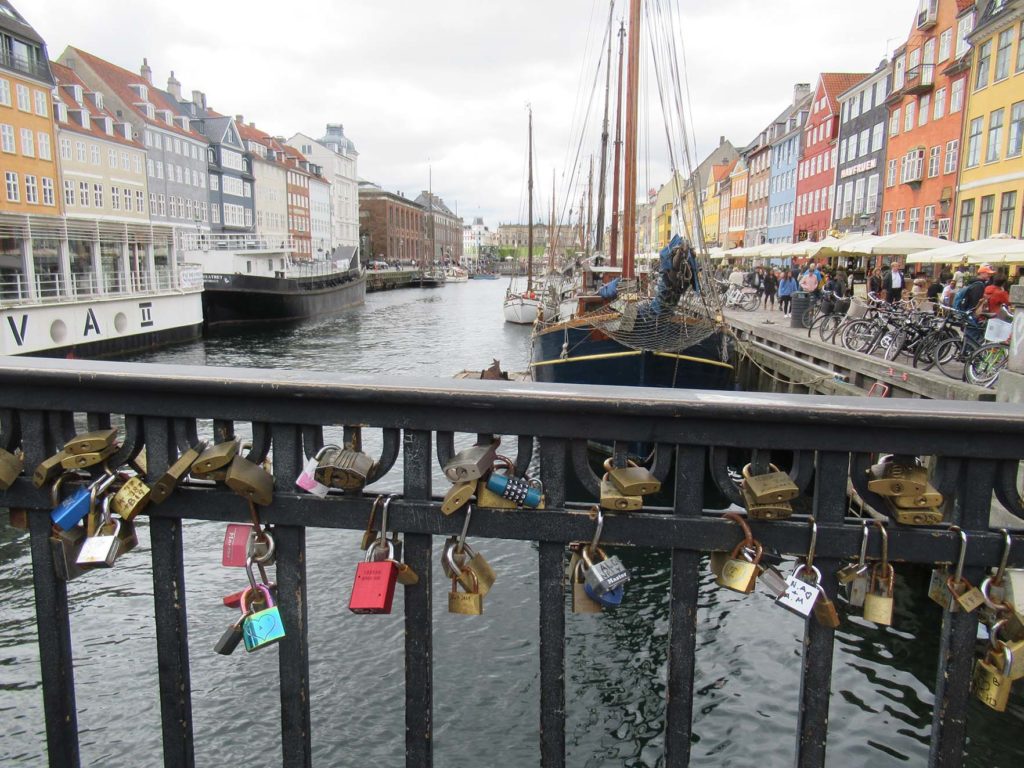 Adding to the area’s charm, hundreds of “love locks” are affixed to several Nyhavn pedestrian bridge railings — many engraved with couples’ names.

We visited The Little Mermaid, too, a famous (smallish) statue in the water along the harbor. 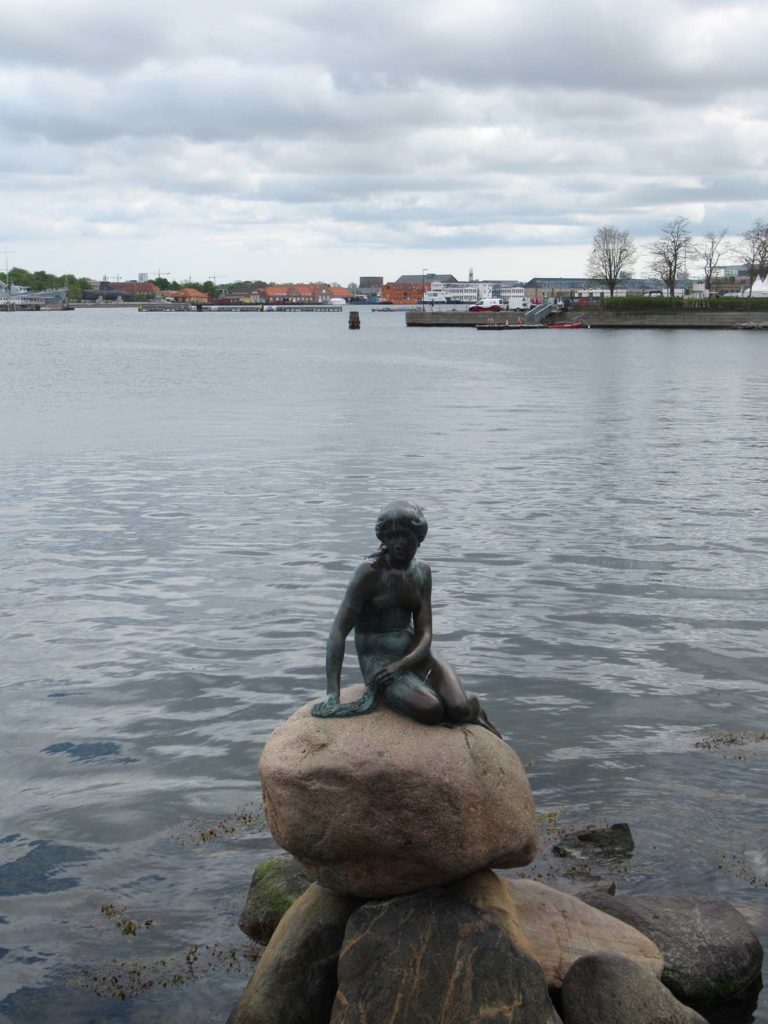 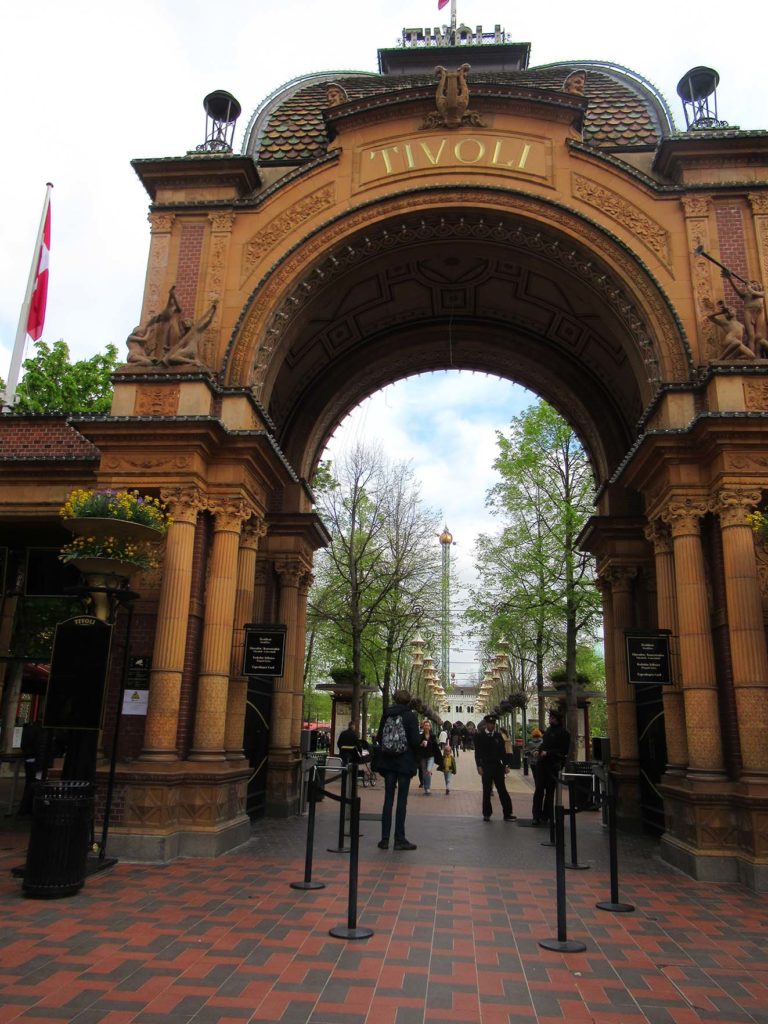 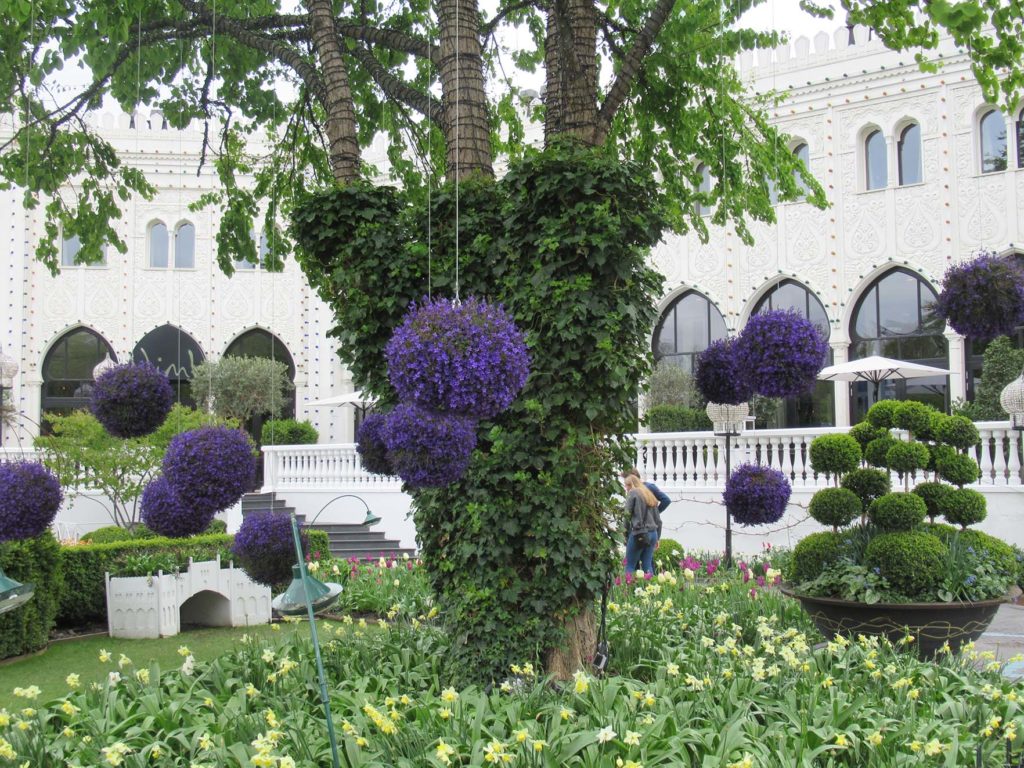 We also visited Tivoli Gardens – established in the 1840s —  one of the oldest amusement parks in the world with amazing flower gardens. Big, landscaped beds of tulips were in bloom along with a variety of other colorful flowers. 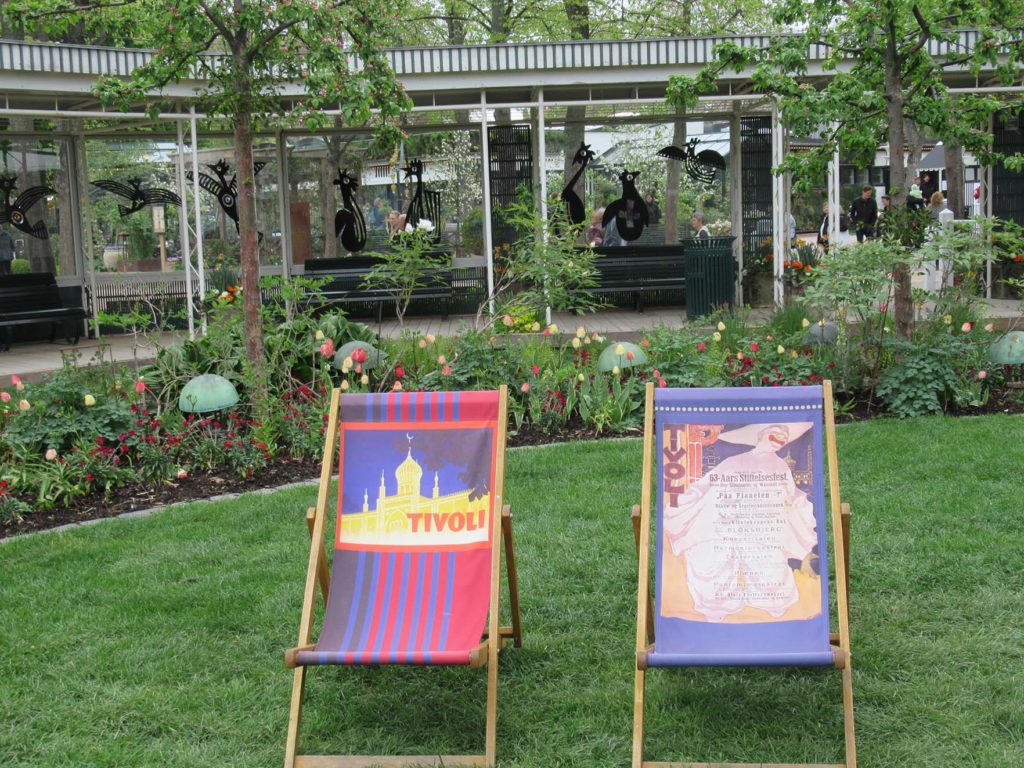 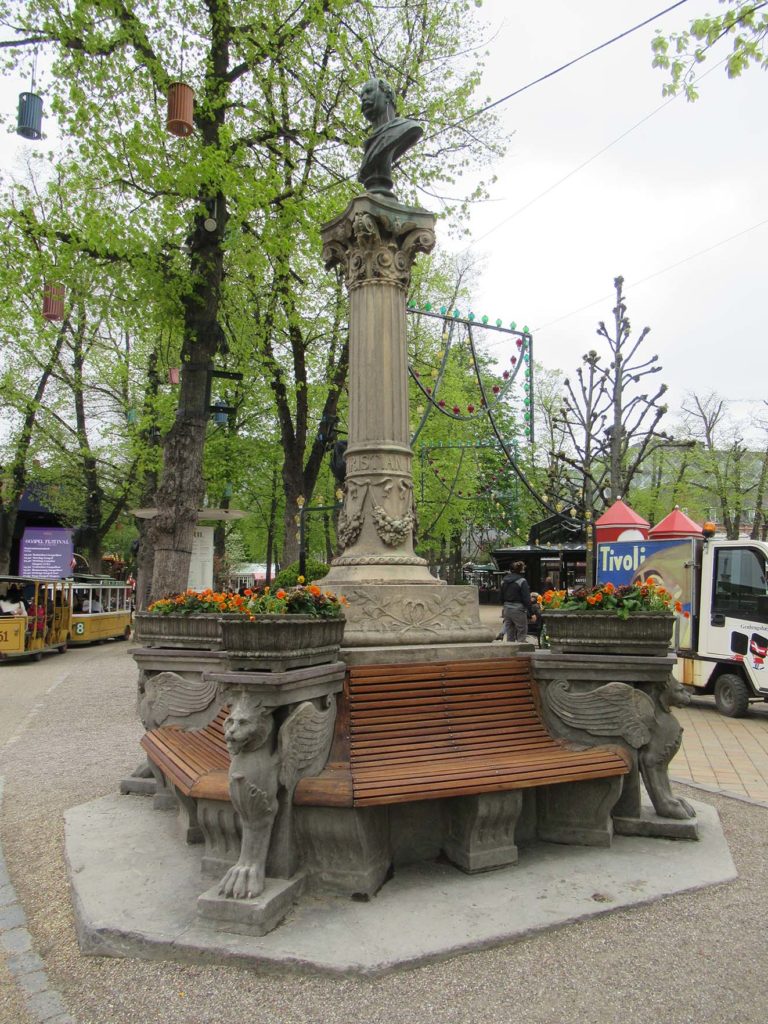 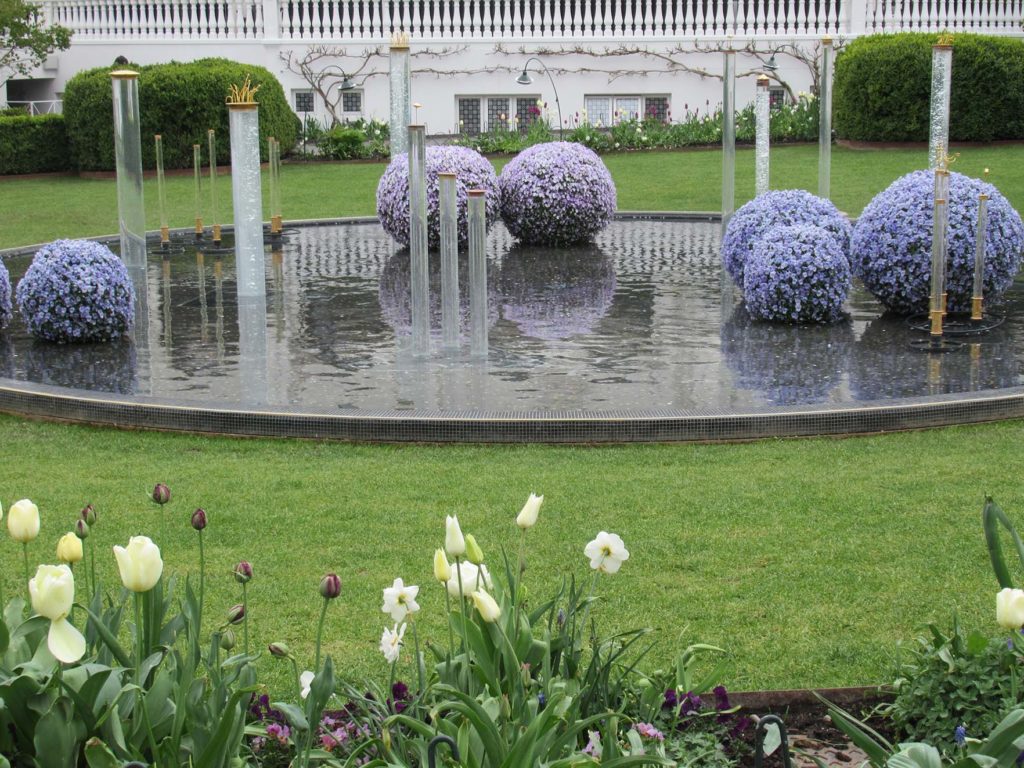 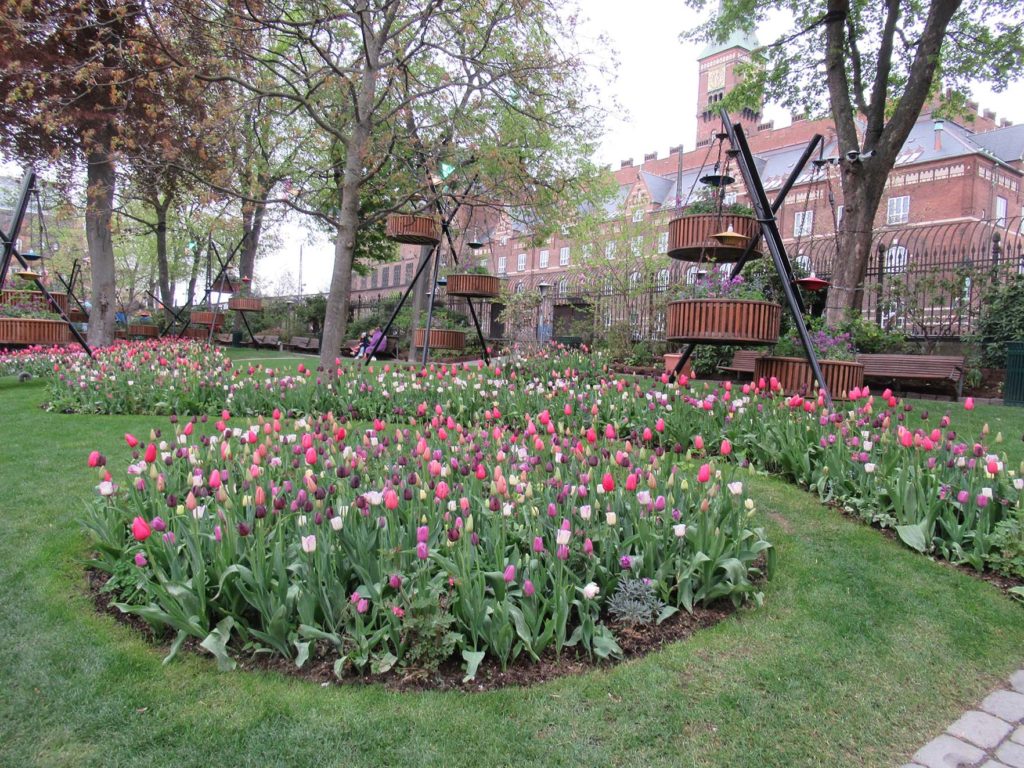 The park has 38 restaurants and 100,000 colored lights that come on at night. We did walk the whole park and have a meal there but, with jet lag, could only stay awake long enough to see the first lights flicker on! 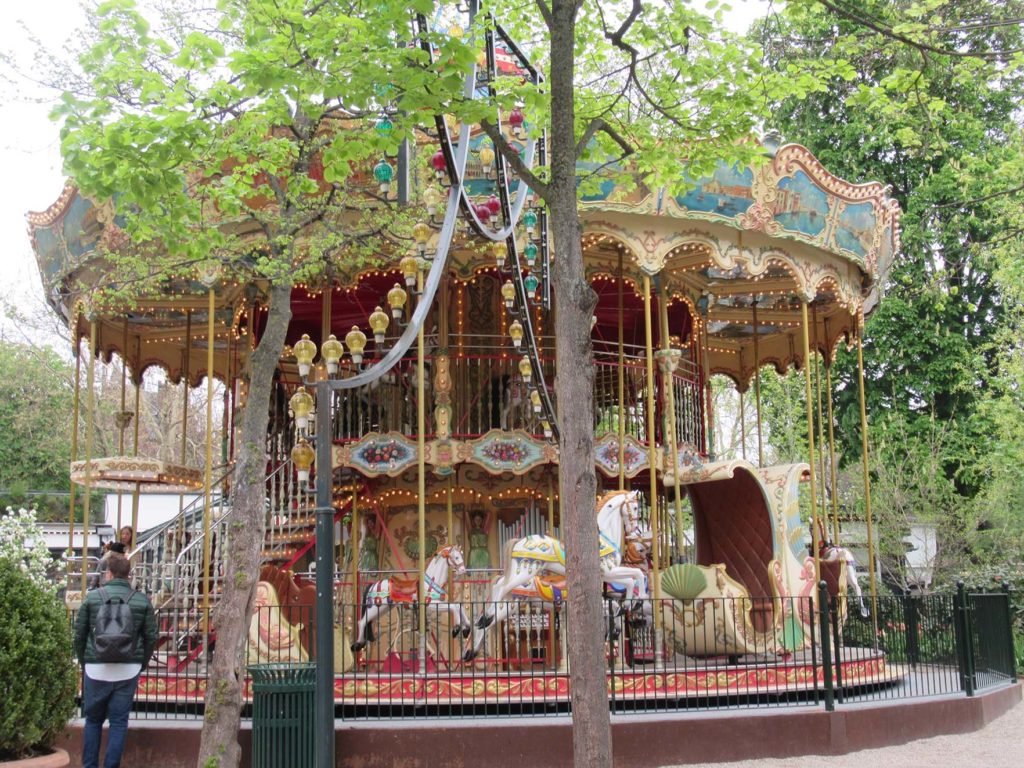 The park has several large, ornate amphitheaters with a variety of performers, a lake with boats, a replica of a German village, as well as a variety of amusement rides, including a beautiful old-fashioned carousel. It’s really something!

Copenhagen was my favorite city on the whole cruise. 🙂

2 Responses to Amazing Copenhagen on a Baltic Cruise