Highs and Lows of June

Posted on July 2, 2015 by blogqueendiane 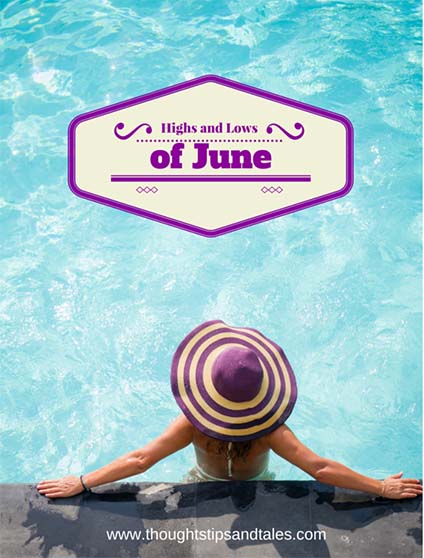 -My son, daughter-in-law and their cute little dog came home to visit for a few days.

-Went out to town to celebrate my dad’s 90th birthday with my mom, sister and brother-in-law. First 90th birthday party I’ve ever been to, and it was fun! My dad broke his hip just six weeks ago — while visiting me — and is walking most of the time without even using a cane. He can climb steps and do just about everything — it’s truly amazing.

-Drank the first cup of coffee of my entire life! It was an iced, frou-frou Starbucks drink, but it wasn’t bad at all.  My goal (and new project) is to gradually strengthen the amount of coffee in it until I can drink “real” coffee with the grown-ups.

-Made a potential new friend on Girlfriend Social.

-Took intro and intermediate Adobe Illustrator classes. The software is so cool — and it can create some amazing things!

-My doctor’s office said I owed an additional $500+ for my March sinus surgery (after the big upfront amount they made me pay). Called their business office two days later to question some things in the itemized statement, and they said my insurance company had paid more since then, and now they owed me $400+. Yay!

-Found $12 cash in a parking lot. My ship came in, even if the refund above falls through!

-The “neighbors from hell” (an overwhelmed mom with her two out-of-control sons) moved back in next door after living there for six years and being gone for about two (heavenly) years. They have the least-maintained house on the block (high grass, broken windows in the garage door, weather-beaten paint, trash in the yard, etc.), too. I fantasize about a 30-foot cement privacy wall and sound barrier between our houses – clear to the street…  You sure take good neighbors for granted until you have bad ones!

-The weather forecast  reports it’s going to be “dangerously hot, humid weather. ” Every day.  Thank God for AC! And October.

Highs and Lows of May

Highs and Lows of April

Highs and Lows of March

Highs and Lows of February

Highs and Lows of January

Highs and Lows of December

Highs and Lows of November

Highs and Lows of October

Highs and Lows of September

Highs and Lows of August

3 Responses to Highs and Lows of June