Riding Camels in Tangier, Africa, on a Norwegian Mediterranean Cruise 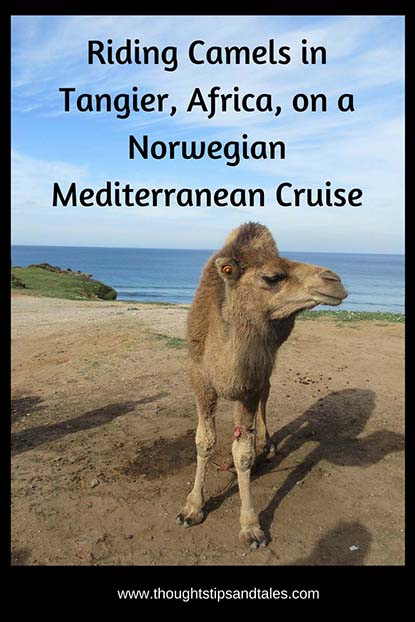 Never thought in my wildest dreams that I’d be riding camels in Tangier, Africa, on a  Norwegian Mediterranean cruise that included stops in Morocco at Casablanca and Tangier — but that’s just what I did!

This fabulous cruise was originally scheduled to start and end in Barcelona, Spain, and stop in several Mediterranean ports in Spain, then stop at three ports in the Canary Islands off the coast of Africa, and spend a day in Casablanca in Morocco, Africa.

As soon as we boarded the ship, however, they told us that the itinerary had been changed due to storms in the Canary Islands. Instead, we would dock at Marseille, France (haven’t been to France since high school), add several ports in Spain, and spend a second day in Morocco visiting Tangier. Since the only two cities I’ve ever heard of in northern Africa are Casablanca and Tangier, that sounded like a winner to me!

We had to book shore excursions for the new cities, and we found one where we could ride camels. The perfect adventure for this exotic spot!

My friend was having back troubles, though, so I went on the shore excursion solo, while she stayed on the ship. 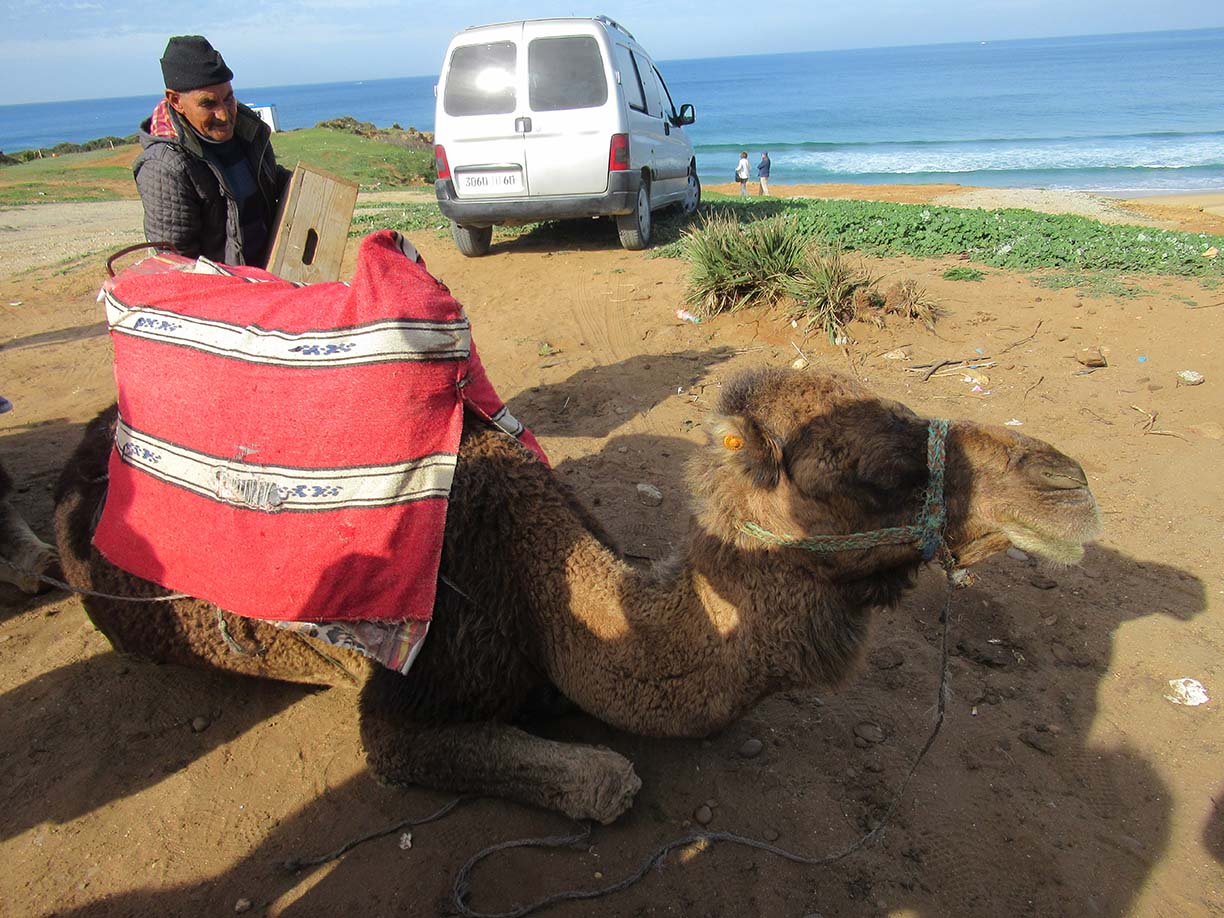 The place the bus stopped for the camel ride was a promontory above a cliff to the ocean where two or three Arabic men with weather-worn faces wearing long robes corralled about 6 camels. 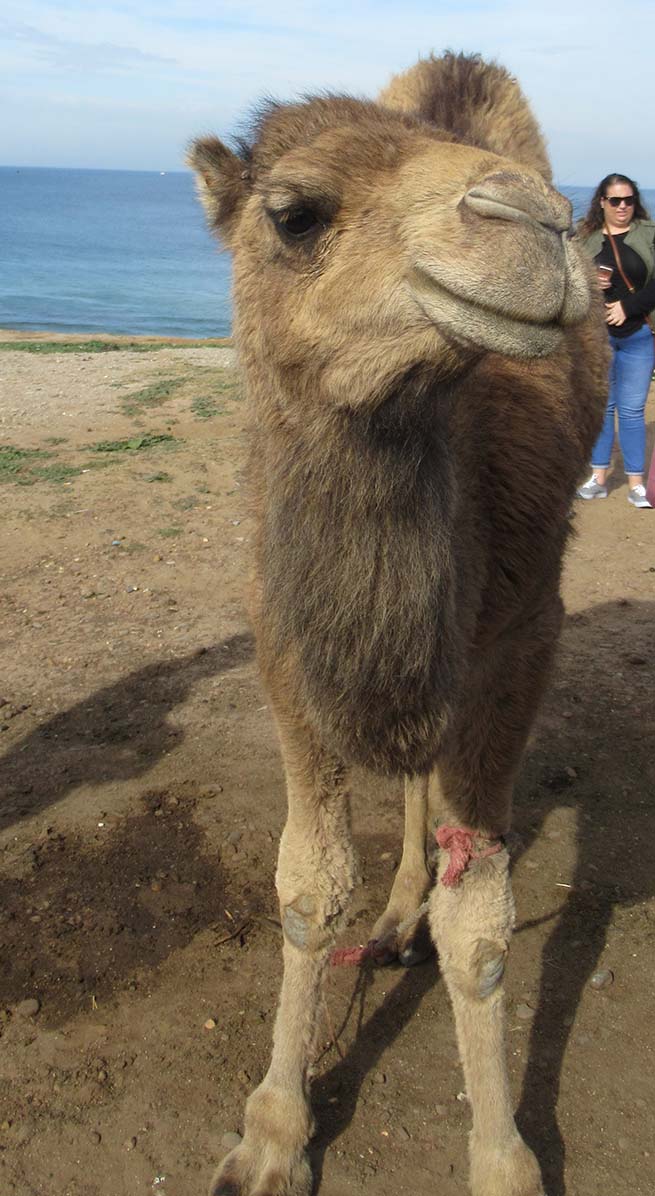 Several were babies, so there were only two or three camels big enough to ride — and two full tour buses of people to ride them!

In the U.S., we would’ve made neat, orderly lines behind each camel, but here it was every man for himself, total chaos. People were aggressively rushing up to the camels before the previous person even got off, so I ended up being the last person from my bus still waiting for a ride. (At the point, I figured the bus driver would just have to wait for me!)

The ride on the camel’s back was only about 15 feet away, then a turn, and 15 feet back — but the exciting part was when the camel keeper muttered some Arabic words and the camel rose into the air from crouching to let people onto the saddle across its back. Instead of lifting straight up, the camel lurched suddenly back, then suddenly forward, and suddenly back again. It felt like riding a bucking bronco!

The saddle had two small metal rings — one on the front and one on the back — and that’s all there was to grasp onto during the jarring up-and-down lurches. The only other way to stabilize yourself was to tightly grip your thighs around the camel’s back (which I also did with gusto).

The shore excursion description stated that we’d have our photos taken while riding a camel (as if someone else would take it) on one brochure, but in another spot the description said “Take your photo on a camel.” It was conflicting information, but since I doubted a camel keeper would have high-tech cameras and printers on-site, I figured it would be a take-your-own-photo situation — and that was the case.

Since I was alone and definitely wanted a shot on the only camel I’d probably ever ride — at the last minute, I thrust my camera into a nice-looking woman’s hands, said, “My name’s Diane — please take some photos of me!” and mounted the camel.

She rose to the occasion after her initial surprise and took several pictures — proof of the big ride. 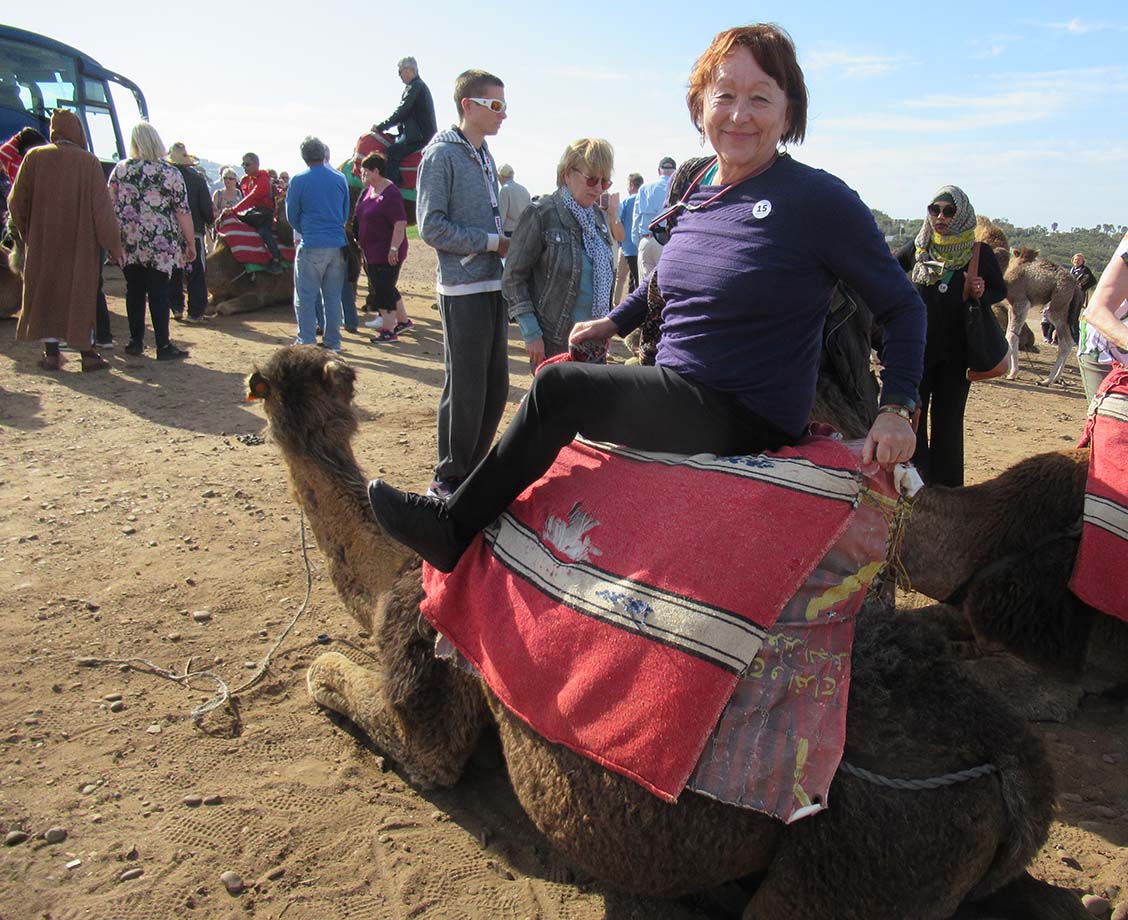 I’d always read — and thought — that camels spit and were sort of ill-tempered, but these camels were all very docile. The babies were especially cute. But they did make a horrible, loud vomiting noise constantly! It wasn’t what I expected at all!

After the camel adventure, the tour bus stopped at another ocean-view promontory and let us shop for souvenirs at a few stalls. The driver warned us to be careful — with good reason! I avoided making eye contact with any vendor until the last minute and tried to buy two bracelets. I said “2 for $3 US” and he agreed. Then, all of a sudden, a second man appeared behind him and when I handed him a $20 bill, he gave me $15 back. I protested and both men insisted they’d said “2 for $5 US” — which wasn’t true. I tried to argue for a minute, then the man who was holding the $15 change started to withdraw his hand — and all the money — so I grabbed the $15 and took off. (I got ripped off on that one…) 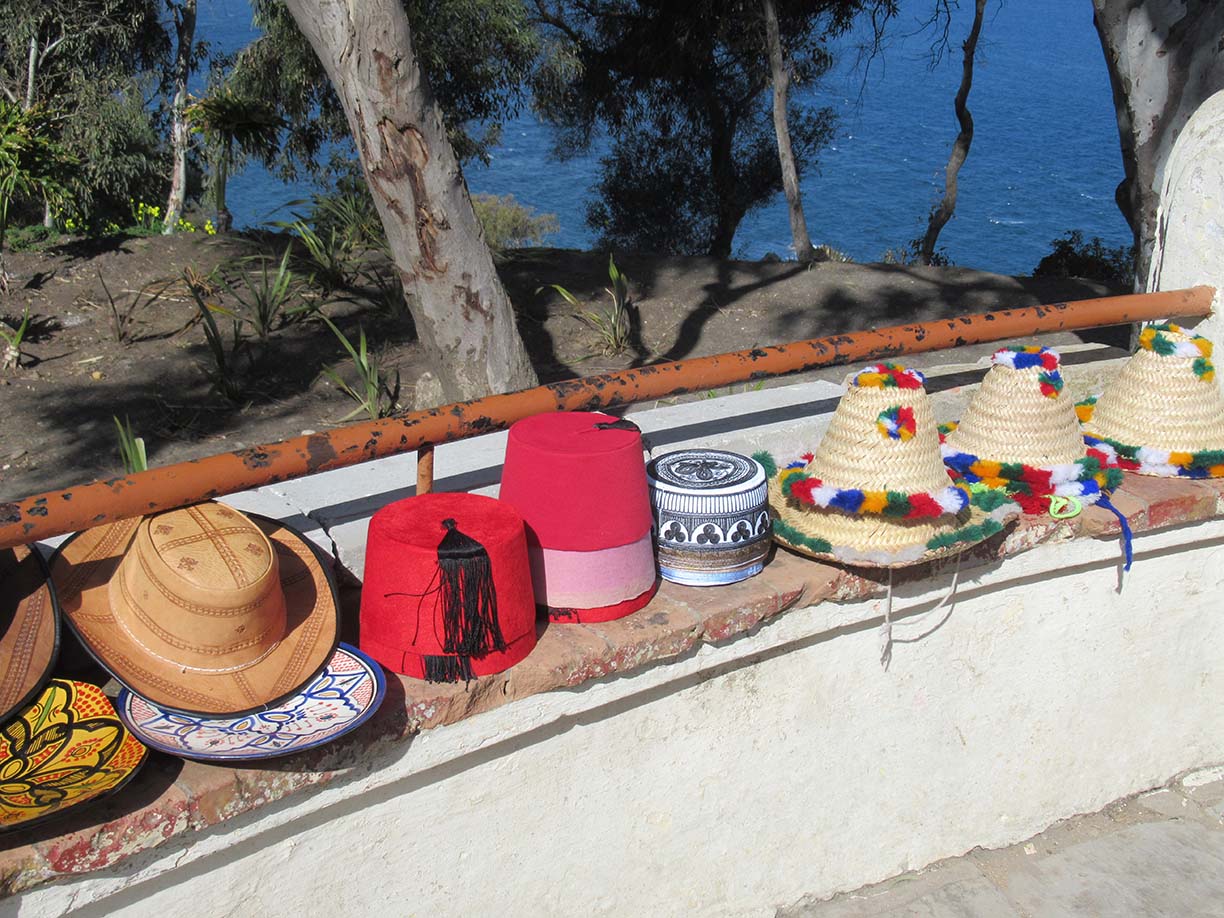 The other thing we found out in Morocco was that street vendors are persistent and relentless. If you make any eye contact or answer any of their numerous questions, they’ll literally follow you for blocks! It’s kind of funny unless it’s you they’re harrassing…

The next place the bus took us to a kasbah – a neighborhood that had a tunneled walkway and narrow, windy streets filled with shops. 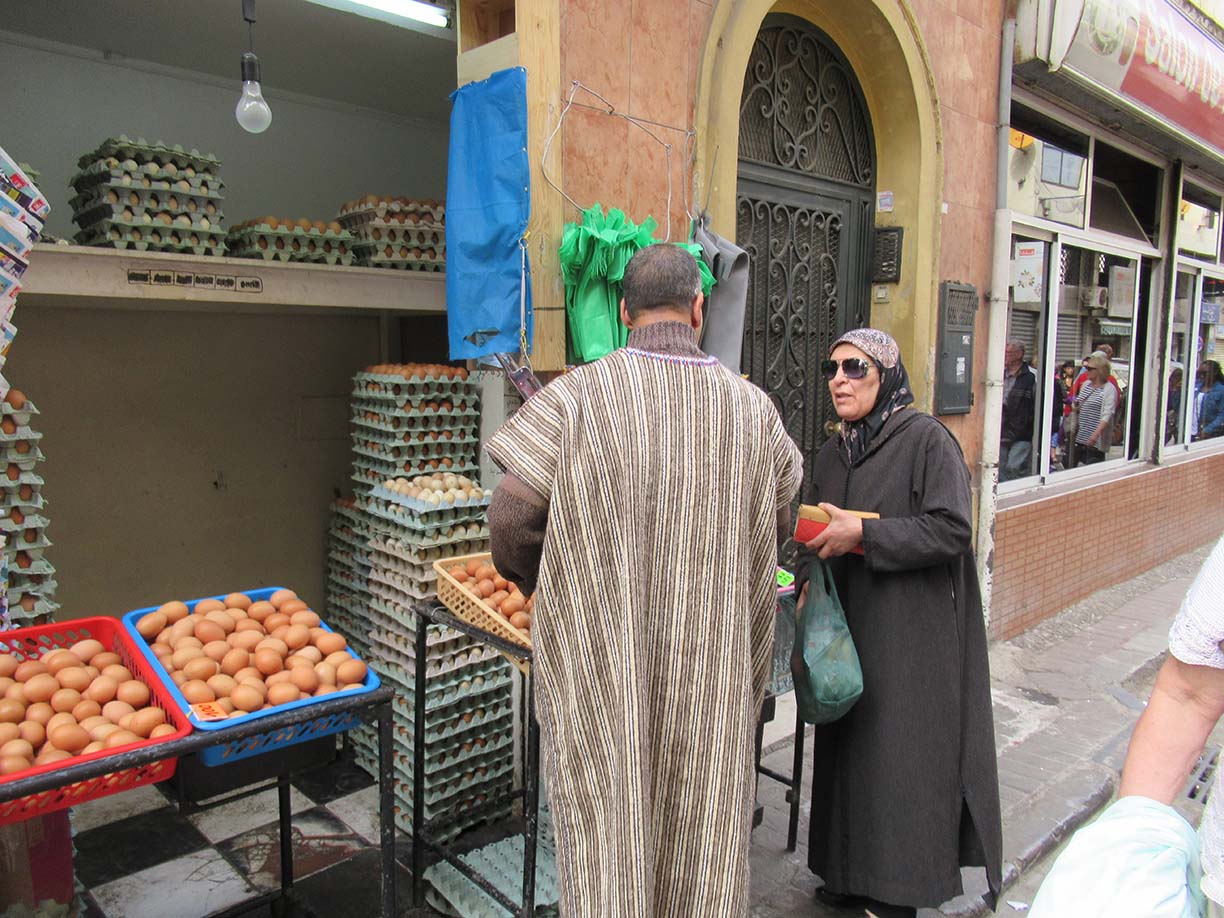 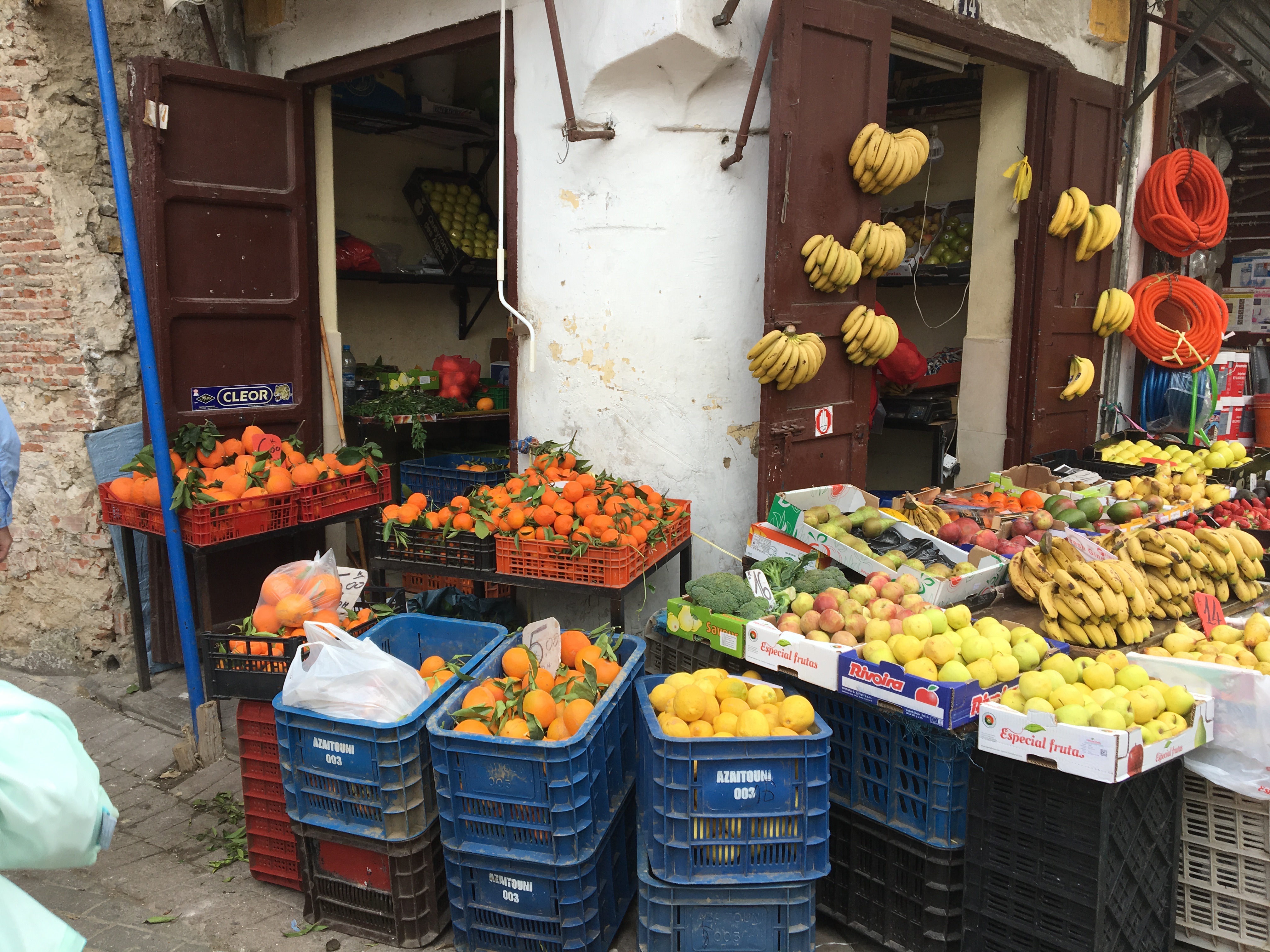 We walked through there and visited a large gift shop filled with leather goods, carved furniture and mirrors, colorful vases and urns, acrylic paintings, native robes and silver jewelry — exactly the sorts of things you’d think would be sold in Tangier. (Big spender that I am, I bought a refrigerator magnet.) 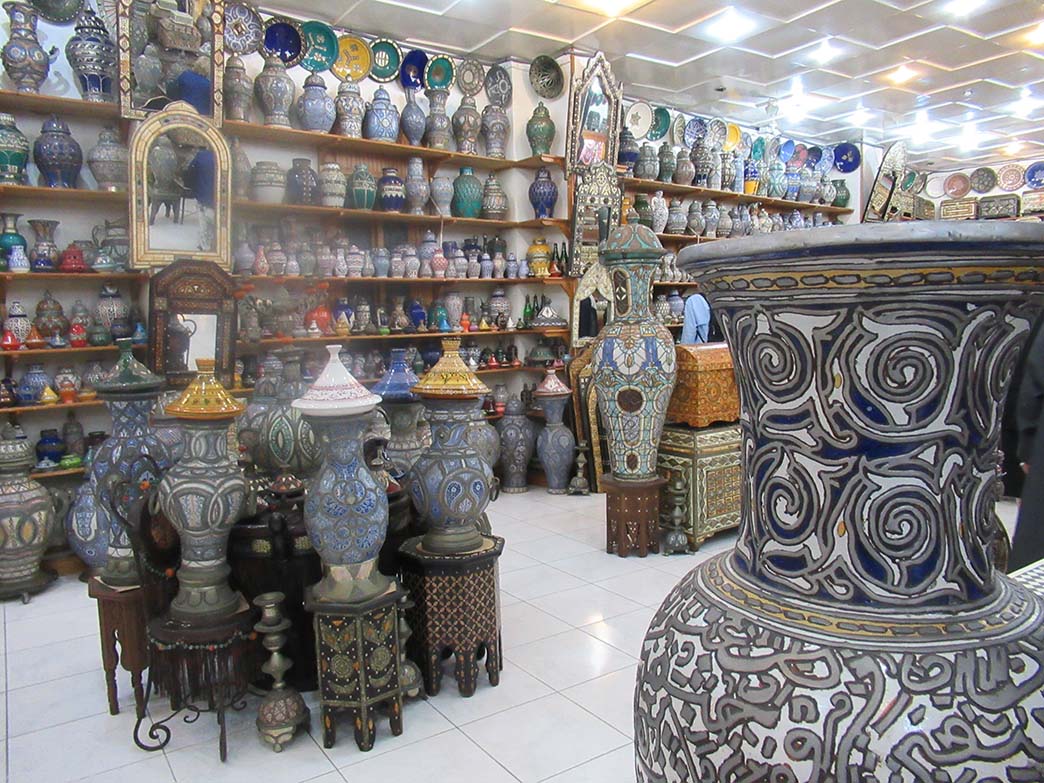 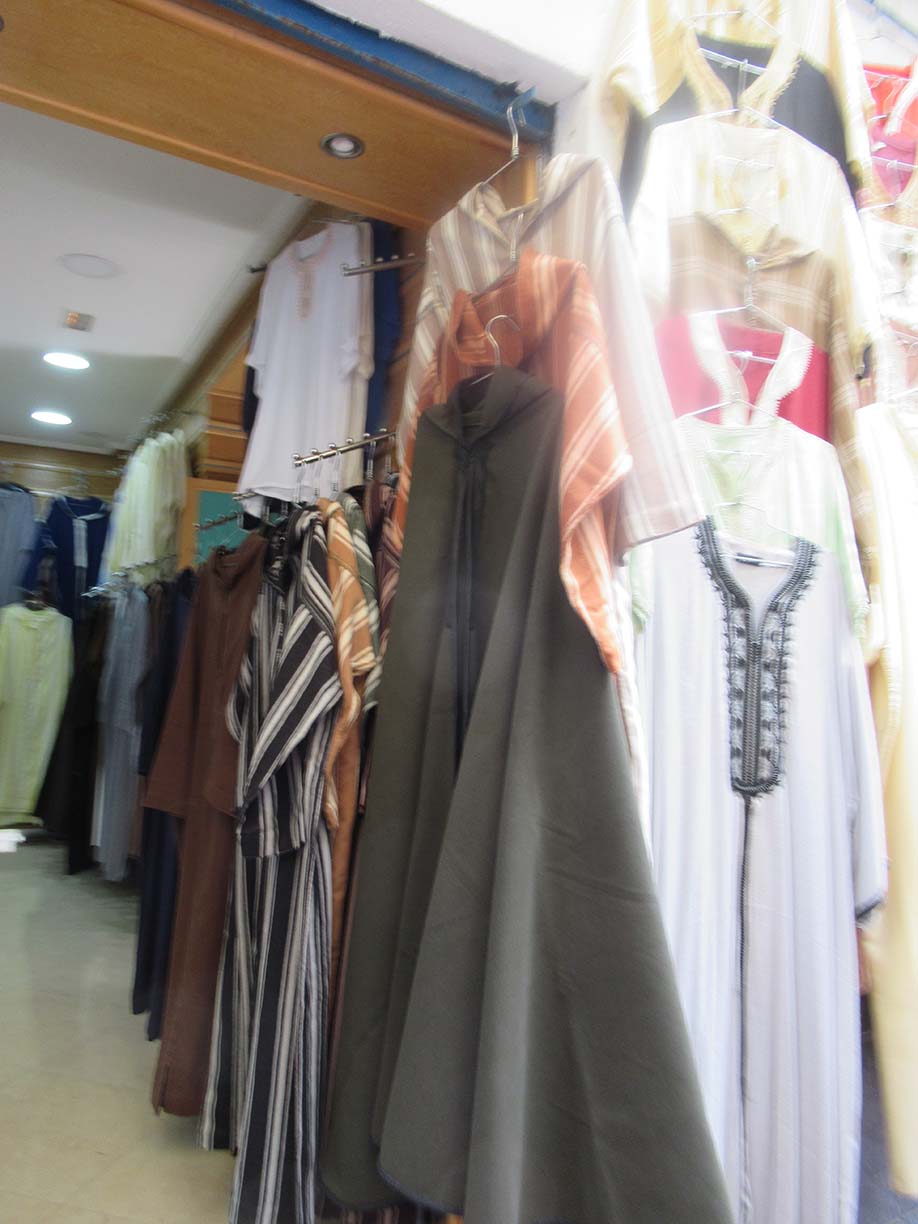 The most beautiful things about the city and the neighborhoods we walked through were all the unique, beautiful, ornate doorways. Couldn’t stop taking photos of them! 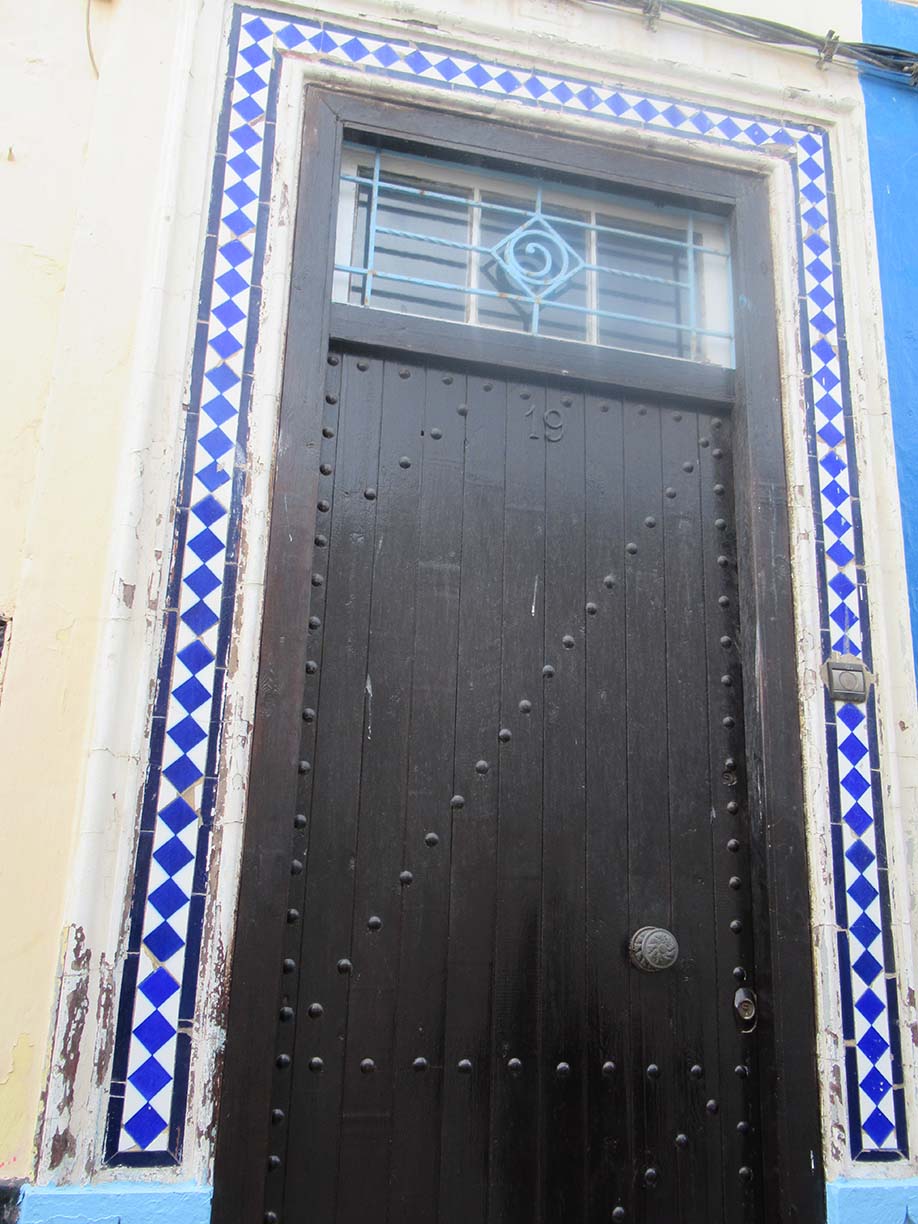 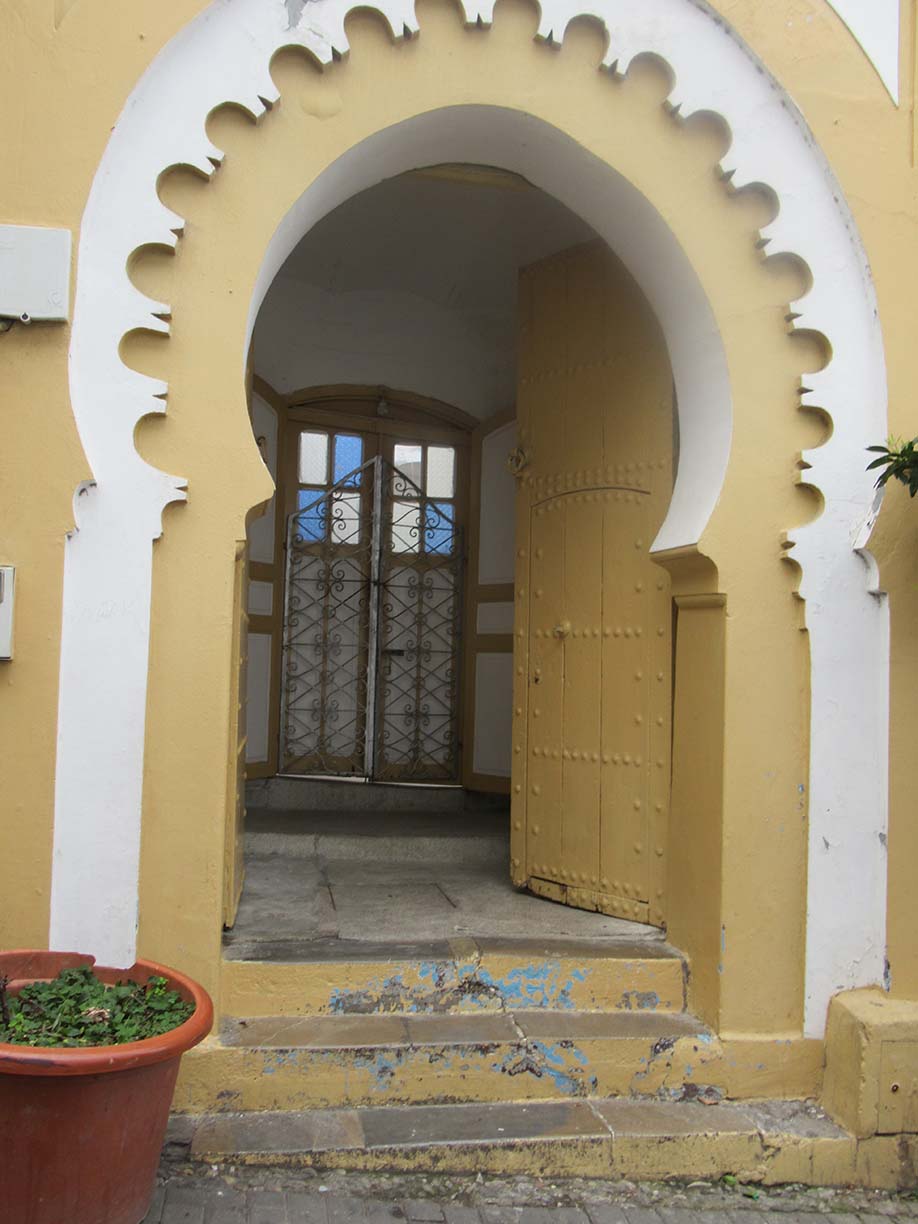 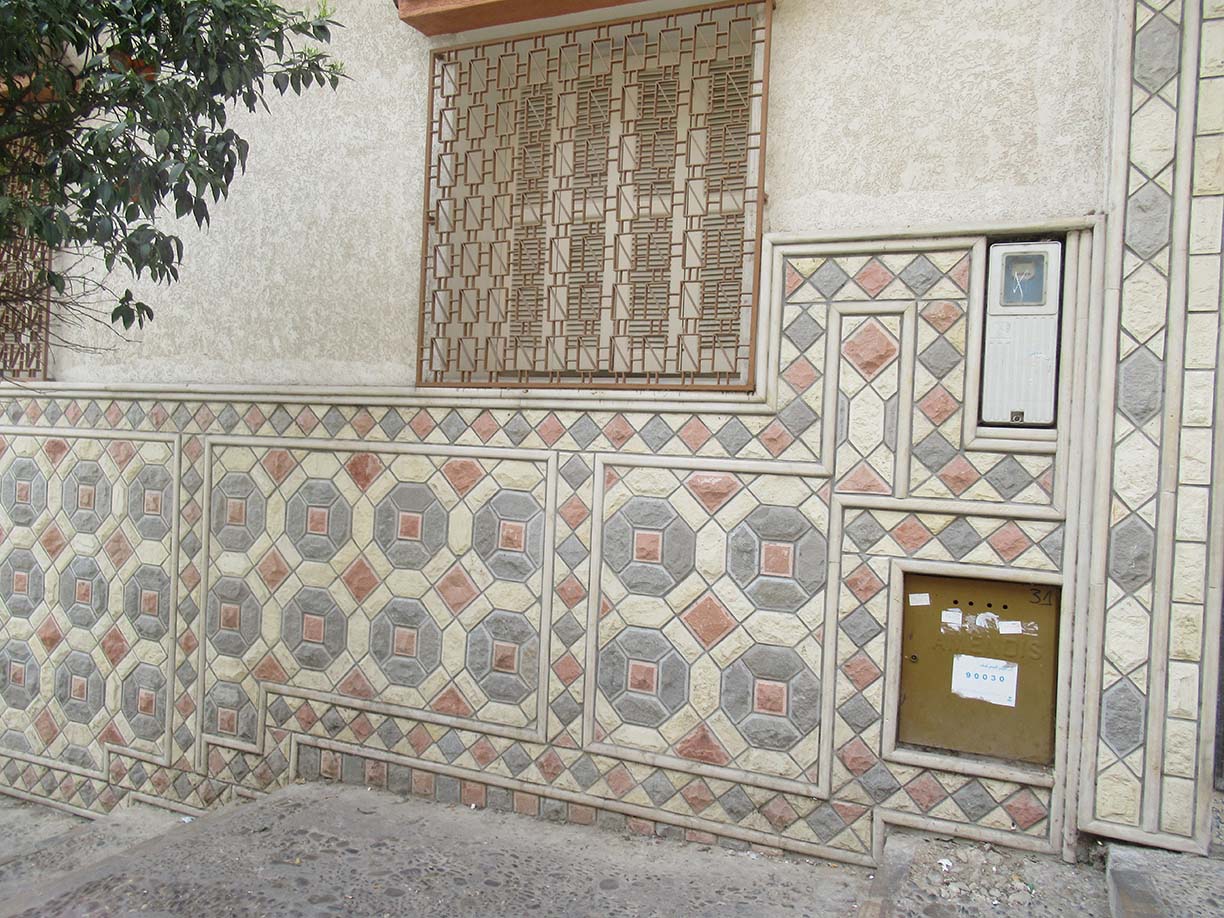 4 Responses to Riding Camels in Tangier, Africa, on a Norwegian Mediterranean Cruise