Rock of Gibraltar — A Fun Shore Excursion on a Mediterranean Cruise 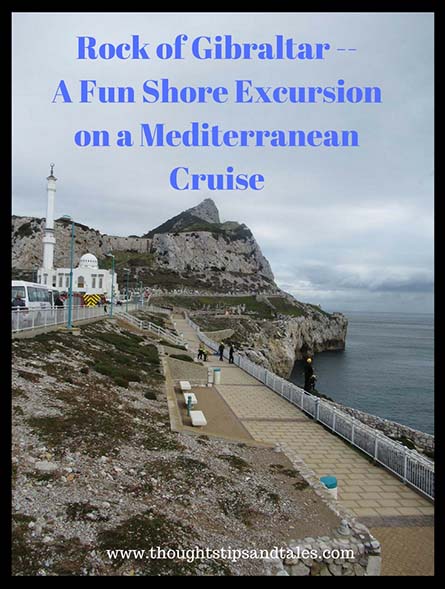 Most people have heard of the Rock of Gibraltar — but if you’re like me, you have no idea what it really is or where it’s located.  I got to tour Gibraltar, located off the coast of Spain — and see the Rock — on a shore excursion from a Norwegian cruise to North Africa and Spain, and loved it. It’s a really interesting place to visit!

If you’re on a cruise ship, before you head out on a shore excursion to see the Rock of Gibraltar, it’s likely that the ship will pass nearby first. On my cruise, the captain announced that passengers could see the Rock of Gibraltar on one side of the ship at about 8 p.m.  My friend and I had a balcony cabin conveniently located on the side of the ship where the Rock was, so we sat in the growing darkness and watched as we passed an enormous rock in the distance the night before the ship docked.

On the day of the excursion, we debarked in Malaga, Spain (birthplace of both Picasso and Antonio Banderas!), and rode about an hour and a half on a tour bus to see it.

The British territory of Gibraltar, which is a peninsula town with a population of about 30,000, requires a passport for entrance, and security is strict. The bus dropped us off just before the border, where we showed our passports to enter, and picked us up again on the other side of the border at the end of the day.

The first thing we did on our outing was spend an hour and a half wandering in an interesting multi-block avenue filled with shops. The commercial area was cute (very British-looking) with a variety of shops, so that was fun. (And my mom now owns a Rock of Gibraltar apron suitable for any occasion). 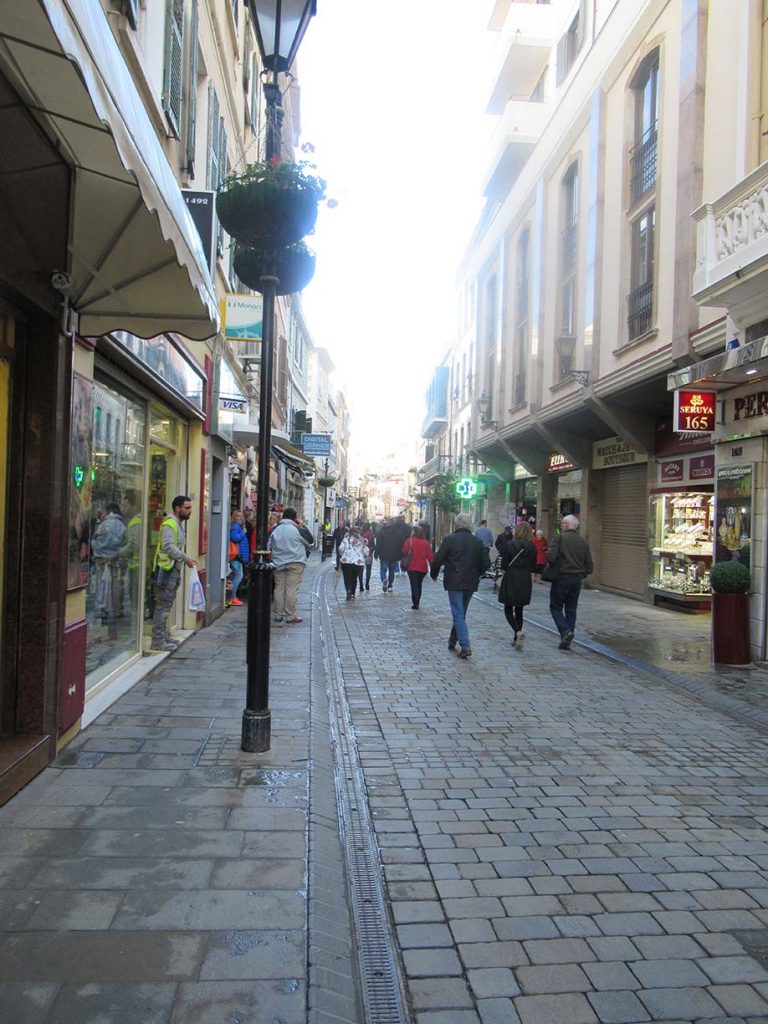 While shopping, we kept seeing postcards and references to monkeys at Gibraltar, but had no idea they were talking about…until later in the day.

The Rock itself is virtually surrounded by beautiful blue Mediterranean water — and it’s very scenic, with an approaching walkway, a lighthouse, and a mosque at the base.  A tram took visitors to the top of the Rock, but we didn’t have time to do that. 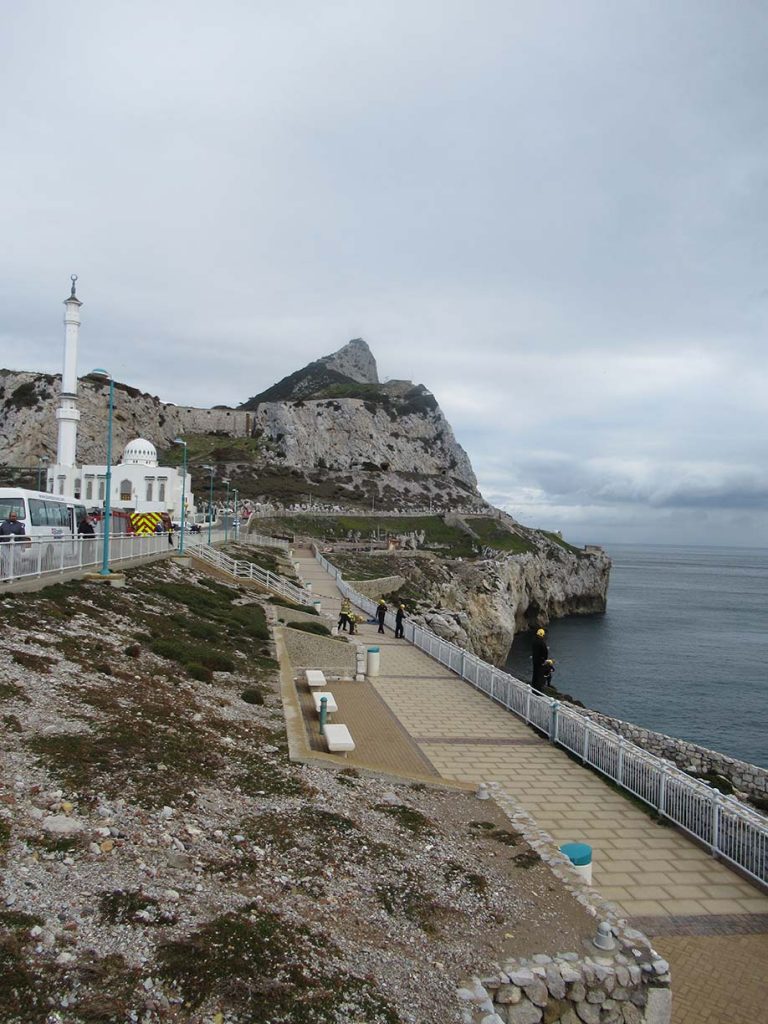 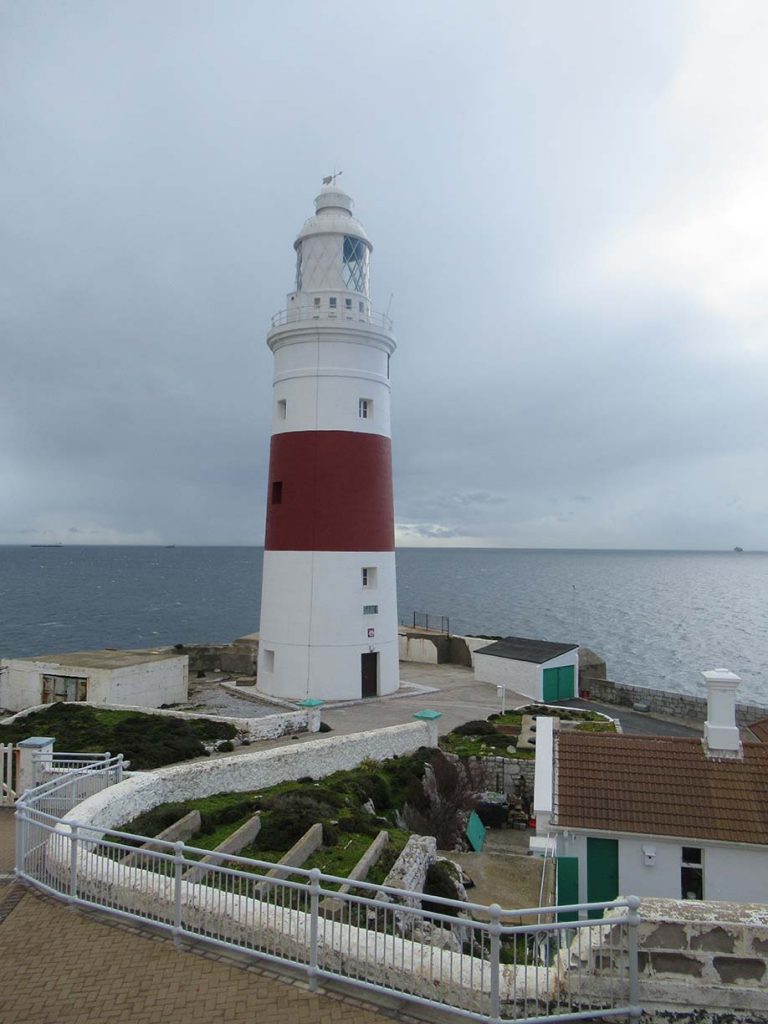 Surprisingly enough, the top part of the Rock is a nature reserve where more than 200 Barbary macaque monkeys make their home. Who knew? The monkeys have the run of the Rock, and they’re everywhere! They’re not scared of visitors, either — approaching readily. Several of them  kept people entertained by jumping from tour bus to tour bus and climbing on a net hung from rocks high in the air; it was really something! 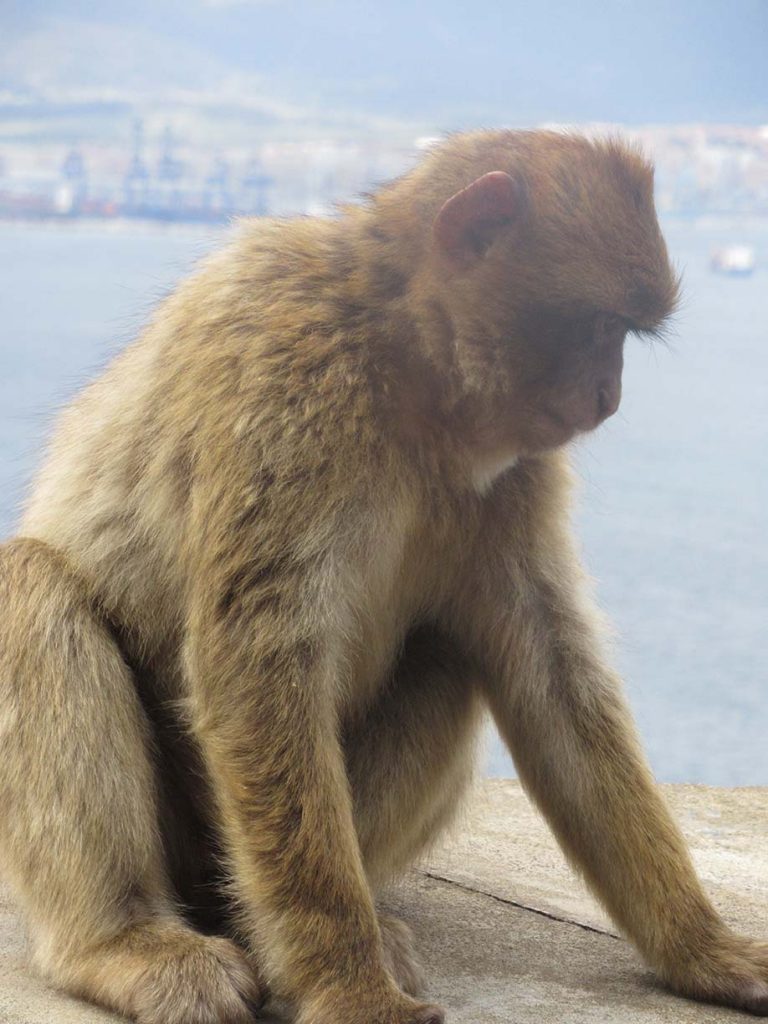 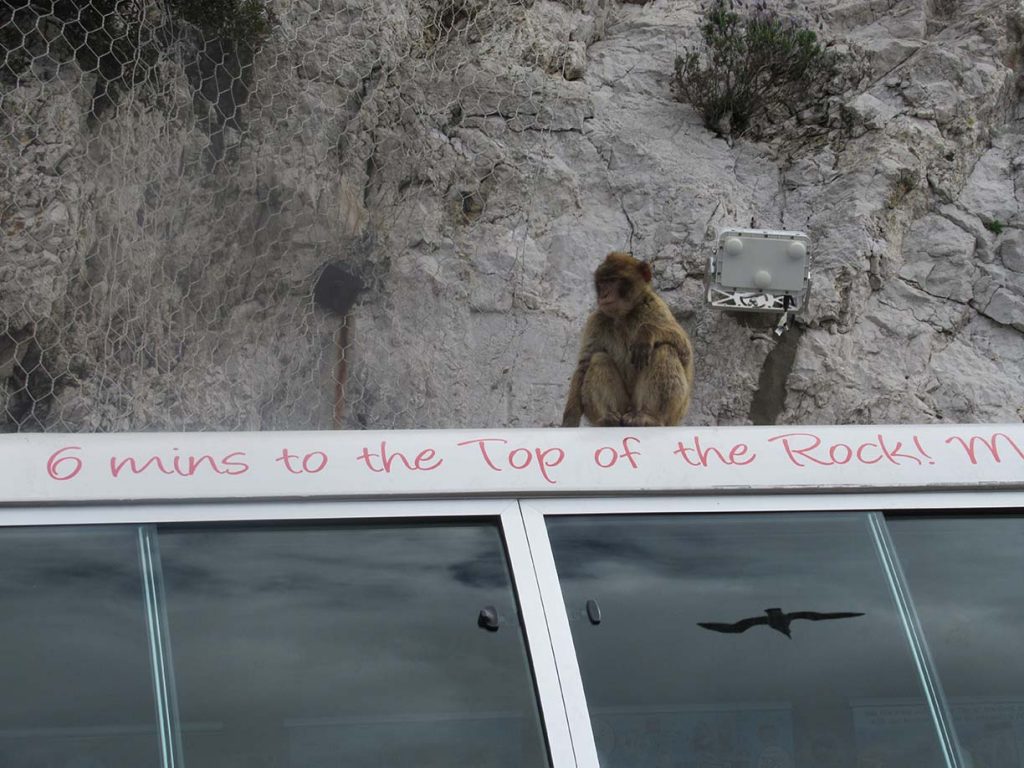 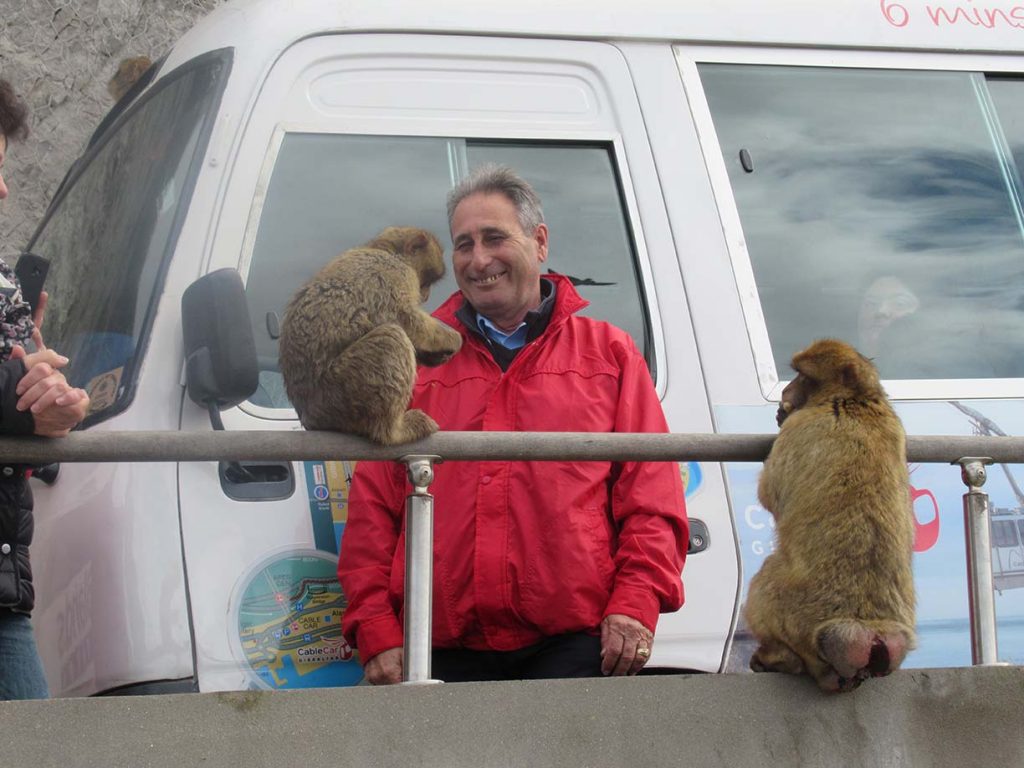 And the Rock is filled with tunnels and caves full of stalactites and stalagmites — more than 100 of them — where people took shelter during World War II air raid attacks. That was another surprise! We got to walk through some, and several were lit by multi-colored lights that change constantly, giving it a disco-like vibe. 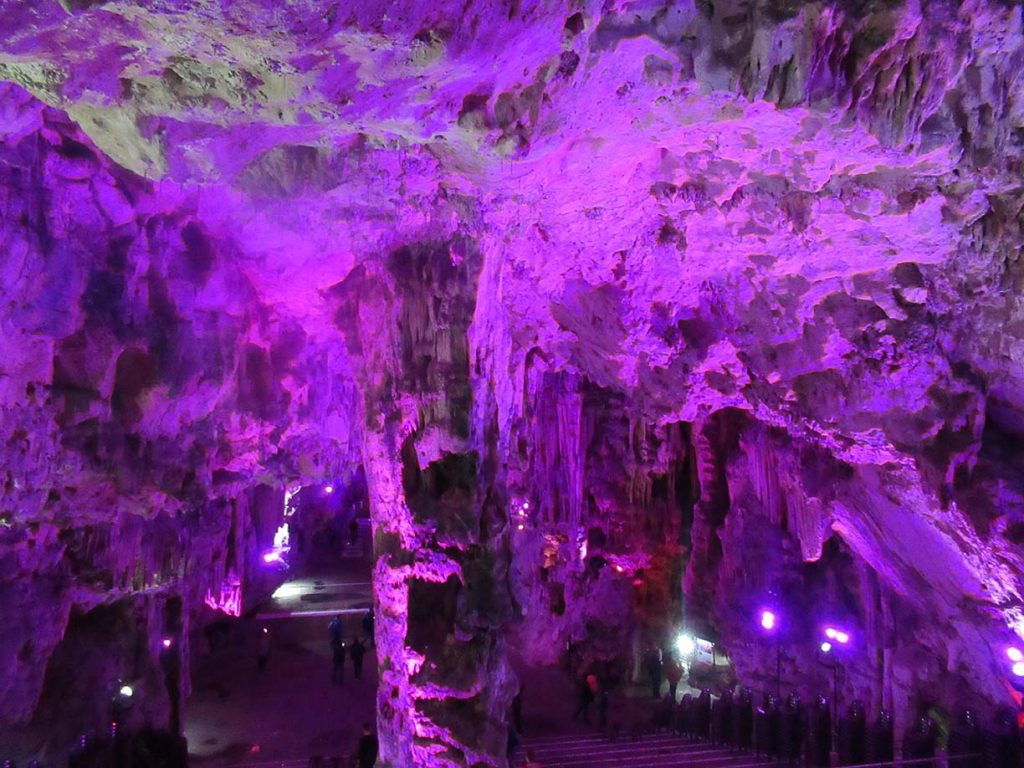 When we left the ship I thought we were going to see some boring historic rock… but the history, the town, the monkeys and the Rock itself were extremely entertaining. The Rock of Gibraltar was WAY more fun than I ever would have guessed!