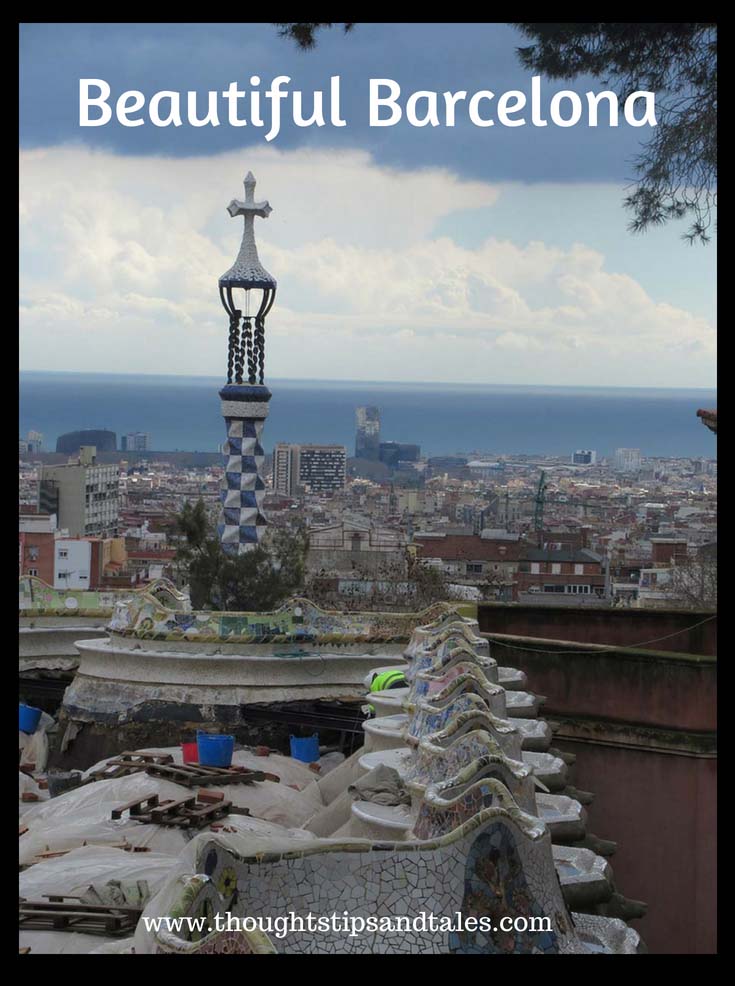 Beautiful Barcelona is one of the coolest places on the planet! The architecture is stunning – and the buildings and parks created by famed artist Antoni Gaudi are fun and funky, too.

My first trip to Barcelona to embark on a Mediterranean cruise was disappointing. A missed plane connection resulted in me screeching up to the port terminal in a taxi after the designated embarkation hours, just barely boarding the ship before it left the shore.  I missed the shore excursion of Barcelona that day that I’d been looking forward to so eagerly, too. And the only sights I saw of Barcelona were the tall hotels as the ship sailed away.

This time, my friend and I went on a cruise along the coast of Spain and into North Africa that started and ended in Barcelona — and we stayed an extra night in Barcelona after the cruise to be sure we saw the major sights. This visit was incredible!

After the cruise ended, we were picked up at the cruise terminal by the same man who’d driven us from the airport to the terminal at the beginning of our trip. (We booked this transportation service from home through AAA and were very pleased with it and really liked our friendly driver!)

He took us for a two-hour tour around Barcelona where we got a good feel for the city. He not only drove us past numerous tourist attractions, but he got out of the car several times to walk with us and explain what things were (and even took a few photos of us).

Our first stop was the Museu Nacional d’Art de Catalunya, on a hilltop, which gave us a fabulous view of the city below. 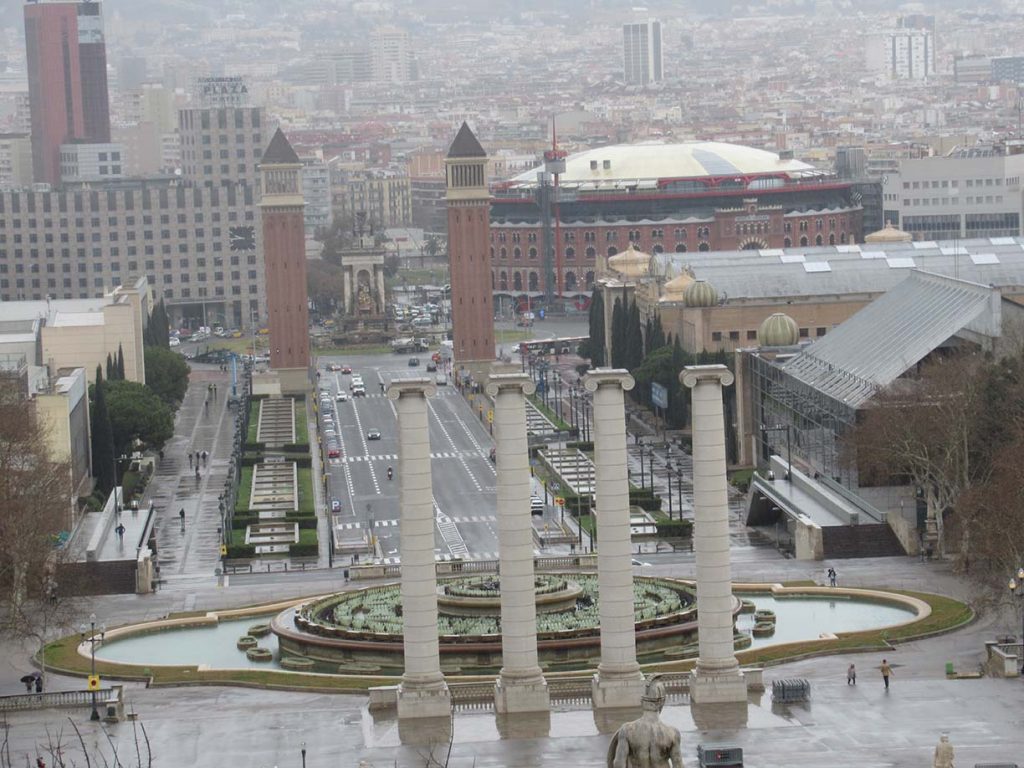 We also went to an ornate, beautiful hospital that looked like a palace– the Hospital de Sant Pau — where we took some pictures in the misting rain. 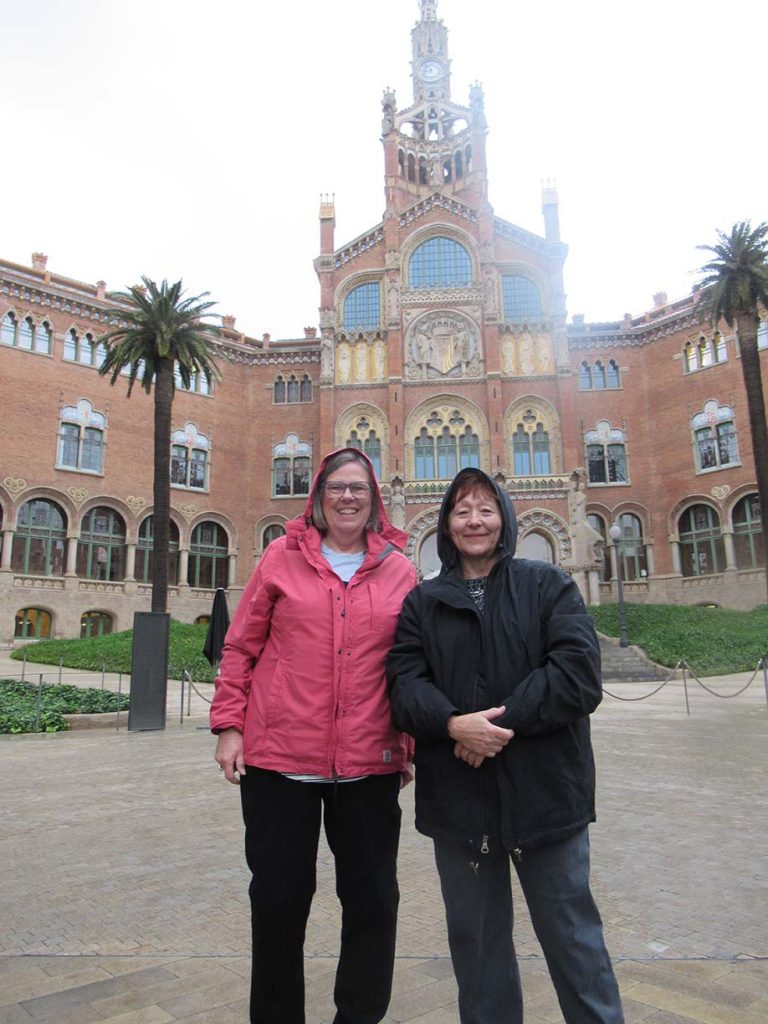 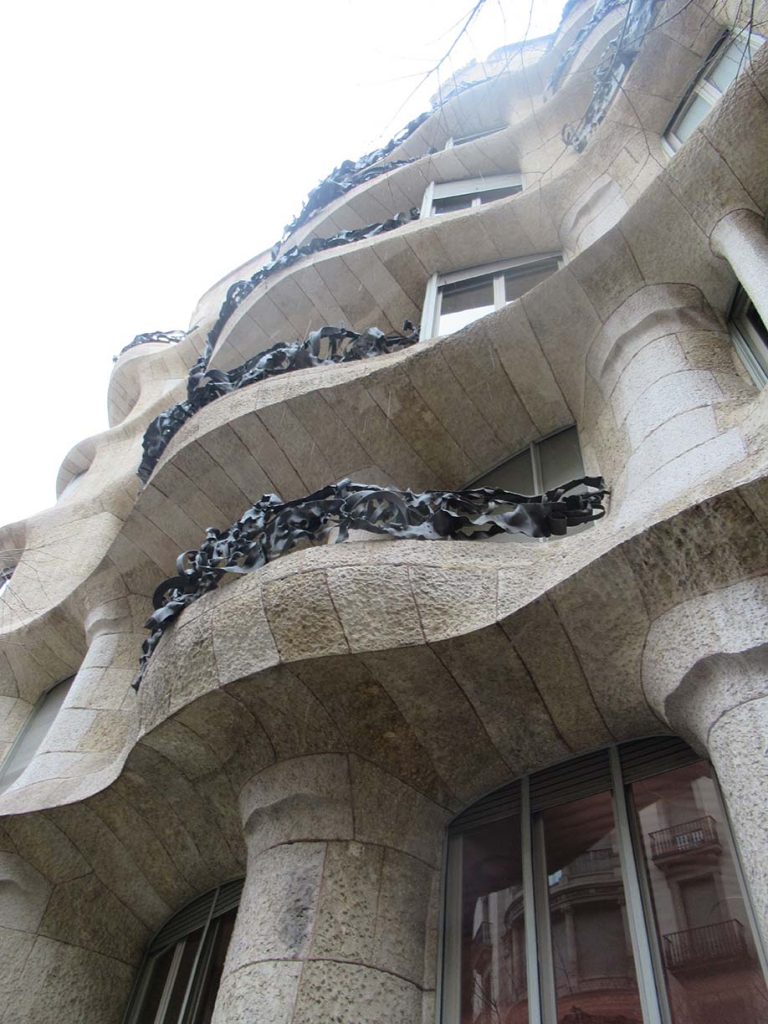 We drove by one of Barcelona’s most fabulous sites – the Basilica of the Sagrada Familia, also designed by Gaudi. Work continues on the gorgeous building even now and it’s expected to be complete about 100 years after Gaudi’s death. 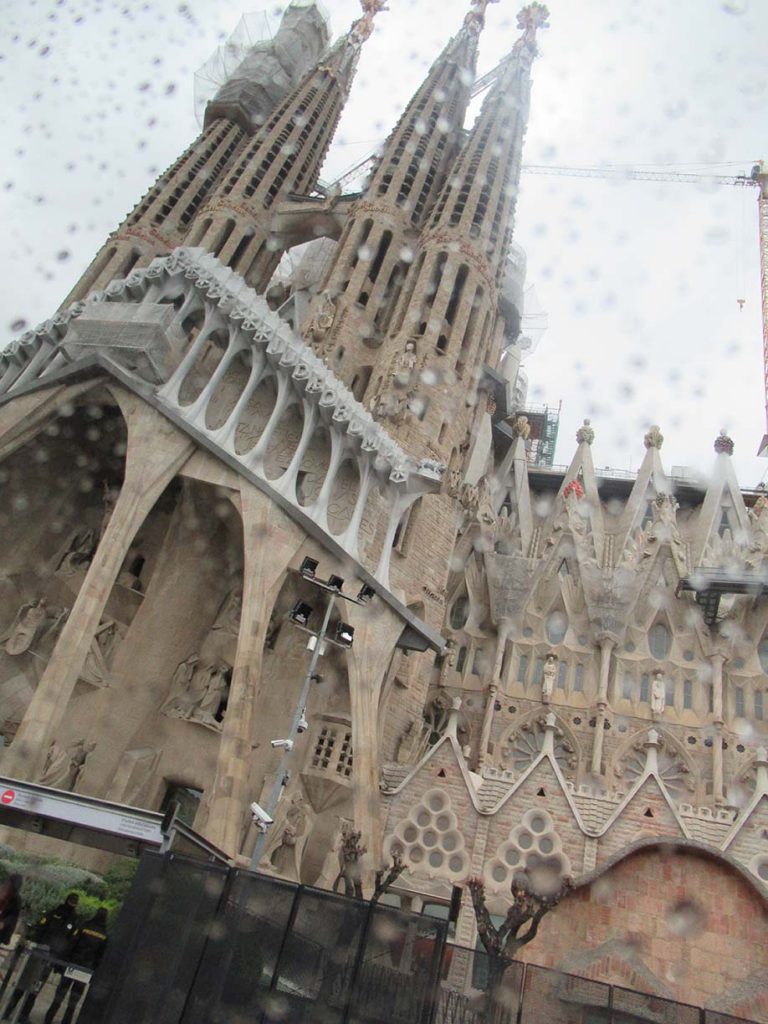 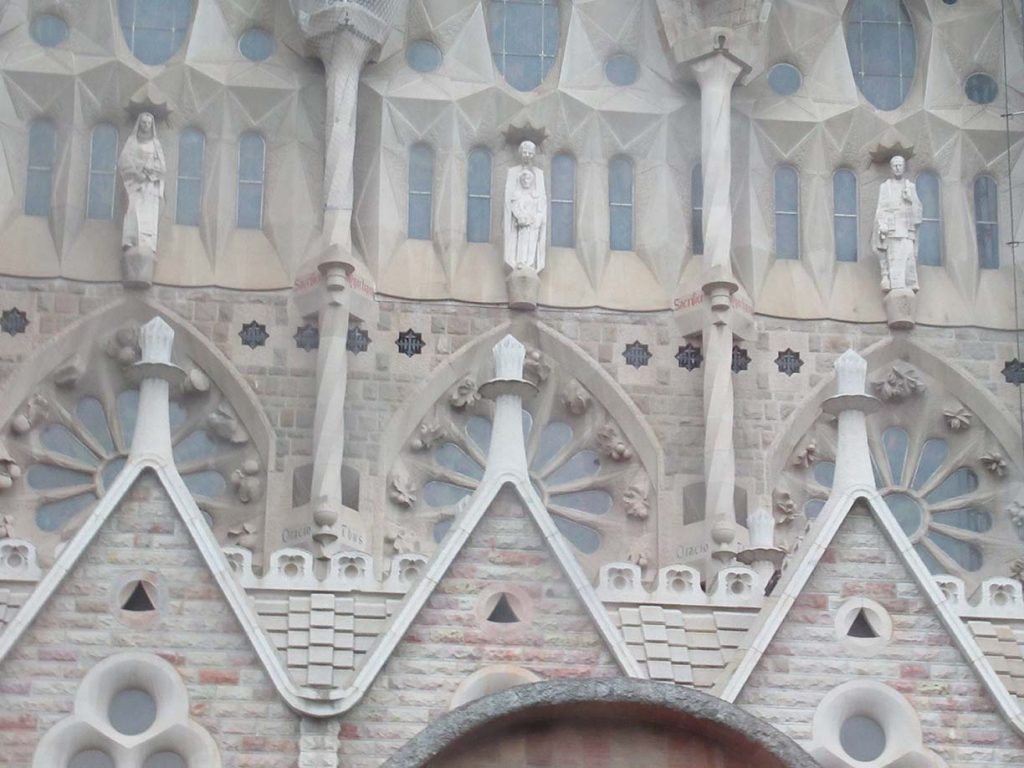 And we also drove around the Olympic Village area, where the 1992 summer Olympics were held.

On the second morning, we walked a few blocks and boarded a hop on-hop off bus, which we’ve never used before but heard glowing reviews from people we’ve met on previous cruises. We got the all-day tickets from AAA in advance for about $40 each.

Navigating the bus route was tricky at first, particularly because it was pouring down rain and visibility was bad. The driver gave us brochures showing the stops on all three routes and microphones to insert in speakers for directions, but everything was in Spanish…

We figured where we wanted to go and counted the number of times the bus stopped between where we got on and our destination – because we couldn’t figure out where the signs were on the side of the road for each stop to actually see our location. (After about five stops, we finally did locate the signs and that made it a lot easier!) 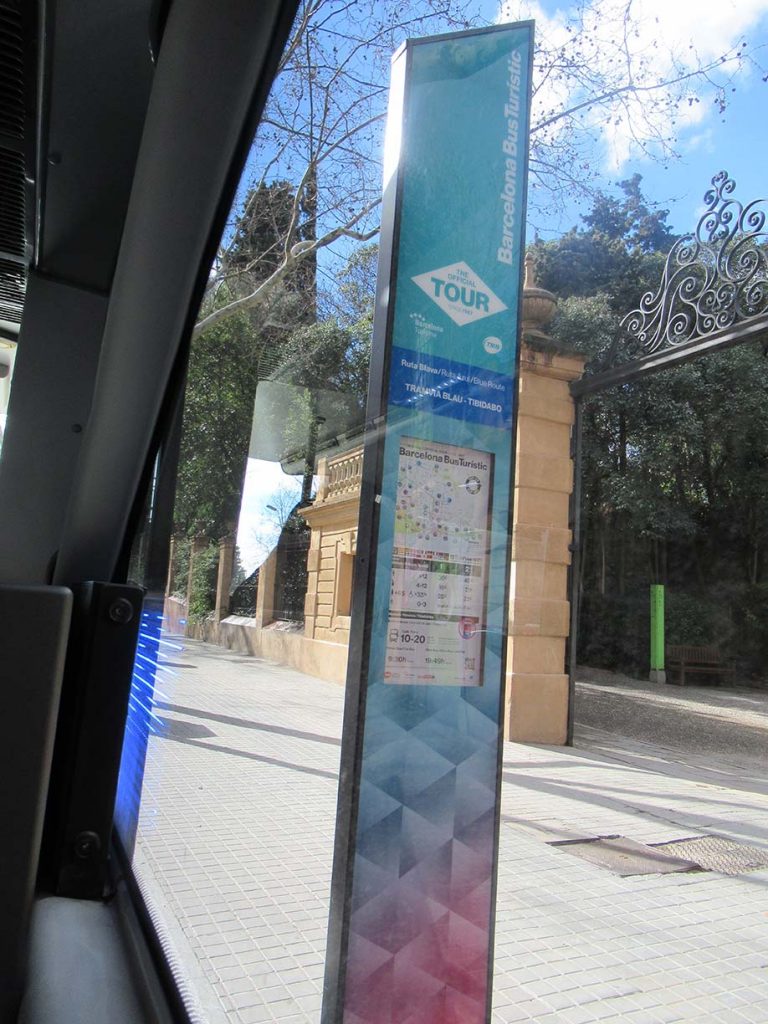 We got off at the stop for Park Guell – the one with the beautiful, bright, curvy mosaic benches and the panoramic view of Barcelona that’s featured in a lot of guidebooks. We followed the few signs guiding us steadily uphill and stopped a few people to ask for directions when the signs stopped. We walked uphill on a steep incline for more than a mile before meeting a local woman who assured us we’d see an “escalator” soon. We realized later that must’ve been the Spanish word for staircase, because there was certainly no escalator, but there were lots and lots of steps!

The huge (42 acre) park was lush and green – and had lots of pathways and sensational views of the city below. 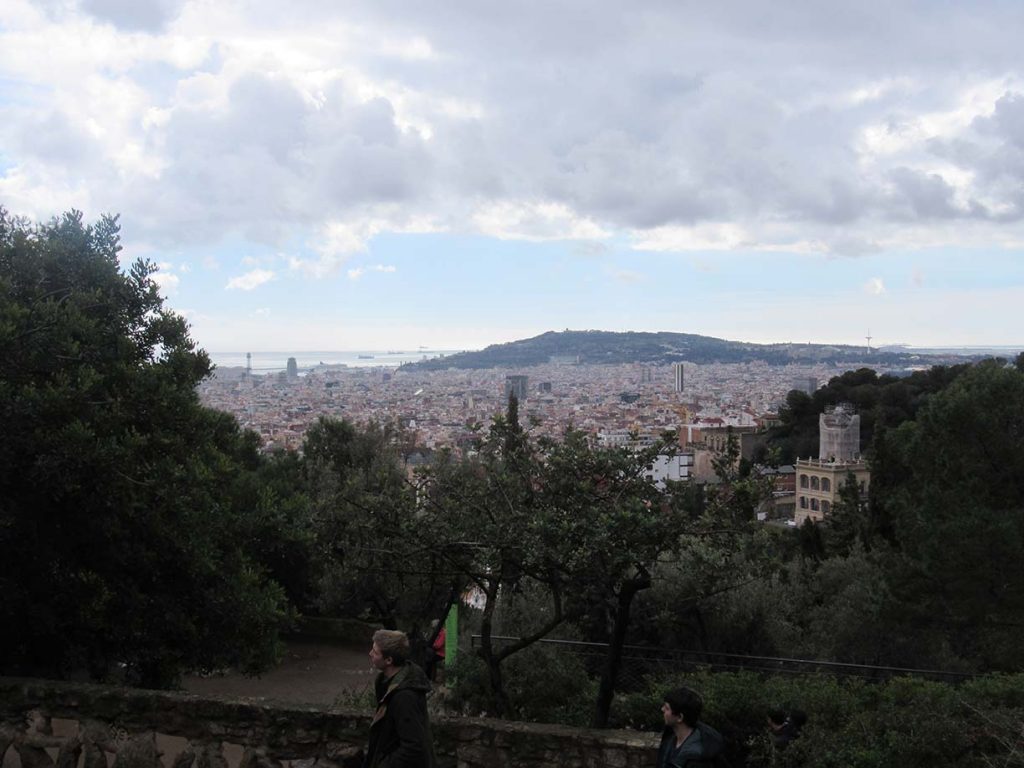 At the ticket booth, we learned that all the English-speaking tours were sold out, so we bought tickets for a self-guided tour through the Monumental Section for an hour and a half later.

We had a good time walking around the park, but, unfortunately, we got lost and finally found the Monumental Section about an hour after the designated entry time (assigned to control the number of visitors inside the area.) Let’s just say one of us told the attendant a little story, and we made it into the best part of the park after our designated time.

The wavy mosaic benches were stunning – bright and multi-colored – and the two Gaudi-designed buildings that looked like gingerbread houses and the view of Barcelona just beyond was amazing! 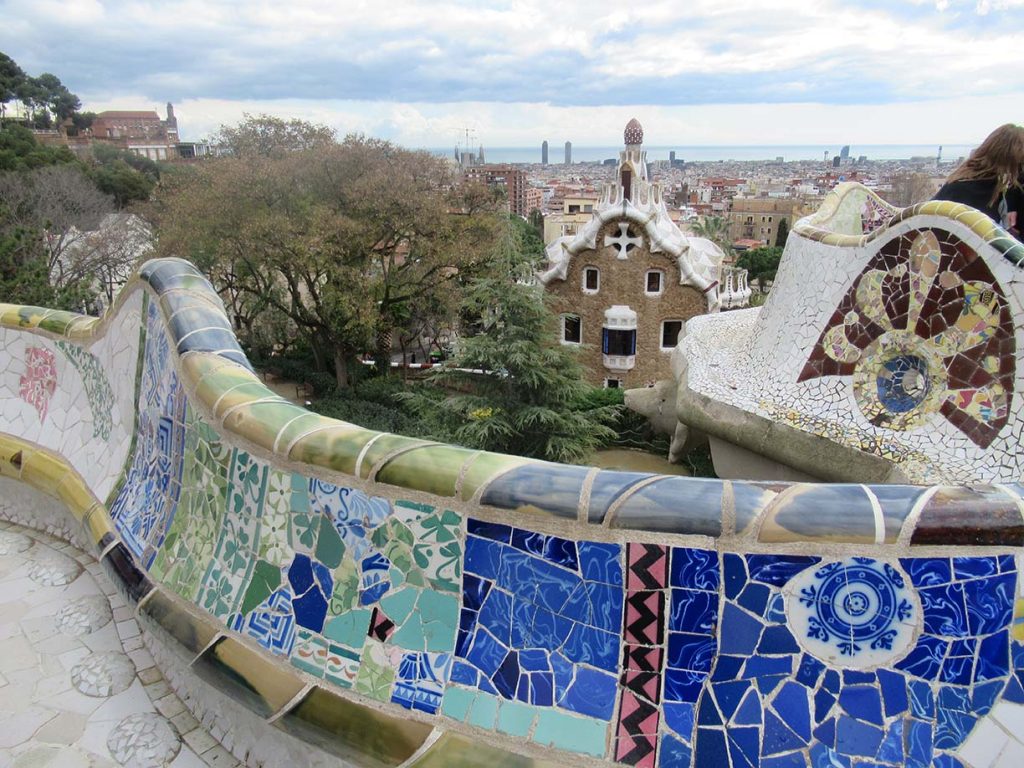 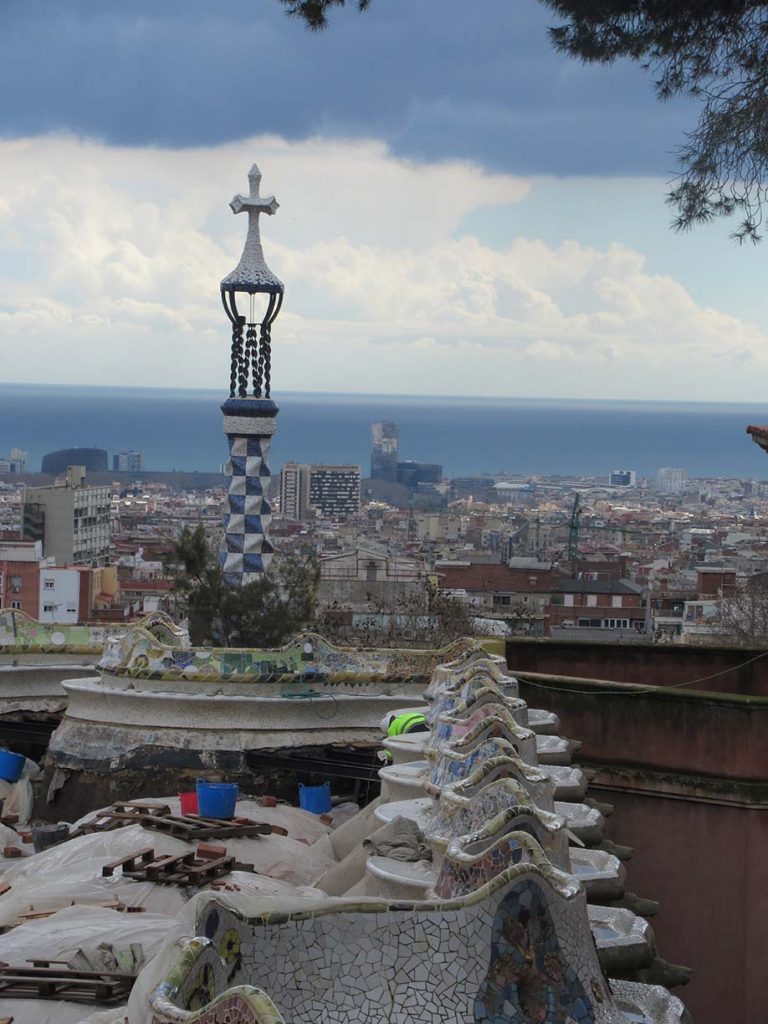 Unfortunately, part of the mosaic bench area was closed for renovations, and lots of people were vying for prime photo spots in the remaining area. But it was worth the walk and the crowd to take in that spectacular sight! (I’d cut out a photo of that view from a travel magazine and kept it on display for six months before the trip — so seeing the real thing was especially meaningful.) 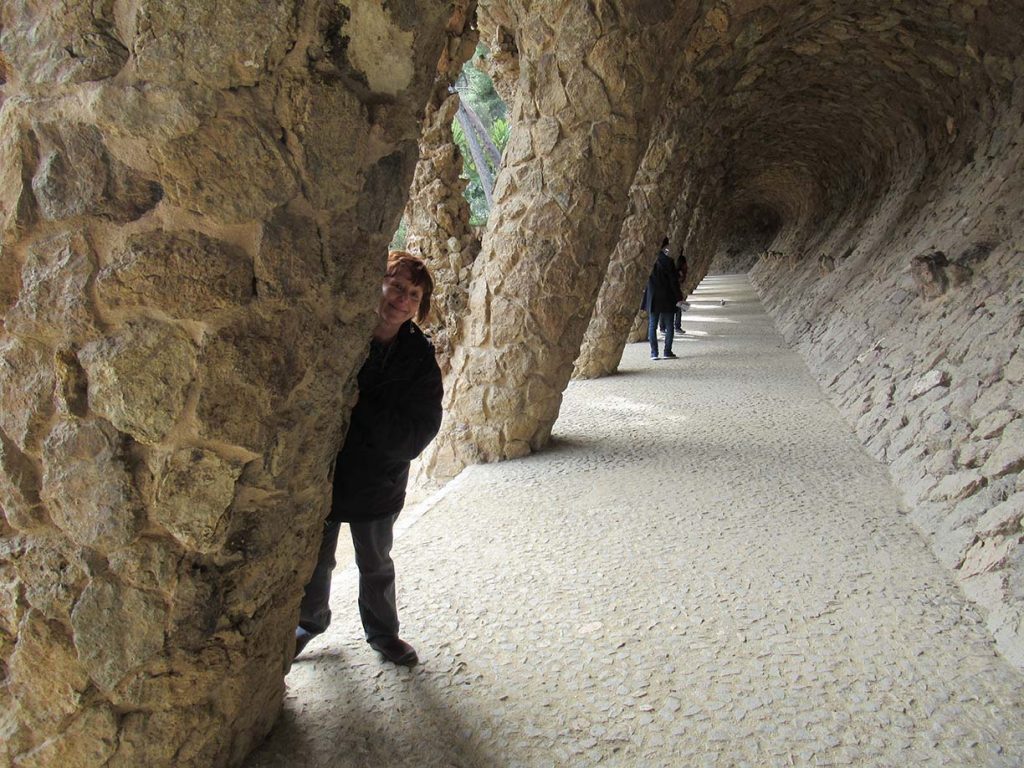 The park had a cool, leaning rock corridor that was fun. 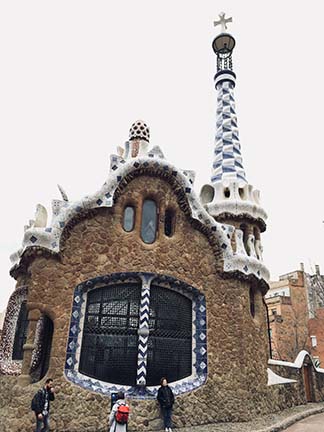 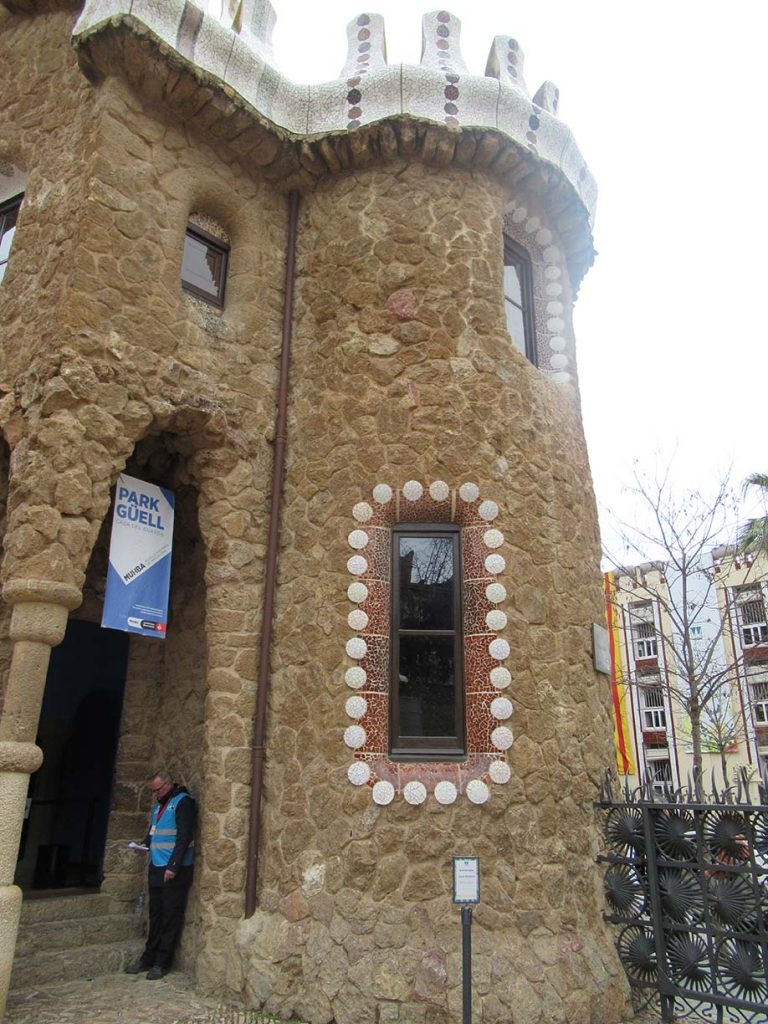 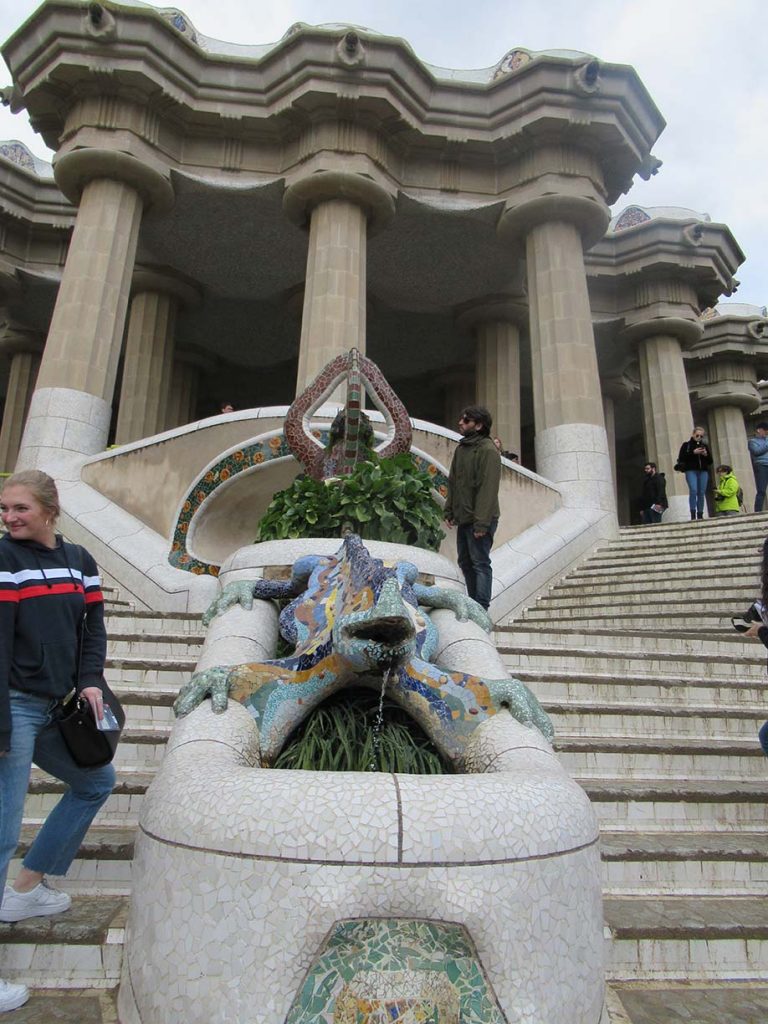 The giant colorful mosaic lizzard drew a crowd; everyone wanted to pose with it.

When we left the park, we visited a number of cute tourist shops that sold colorful Gaudi-inspired colored art pieces and souvenirs – and many had beautiful mosaic borders around the entrance.  After lunch, we hiked back downhill to the bus stop. 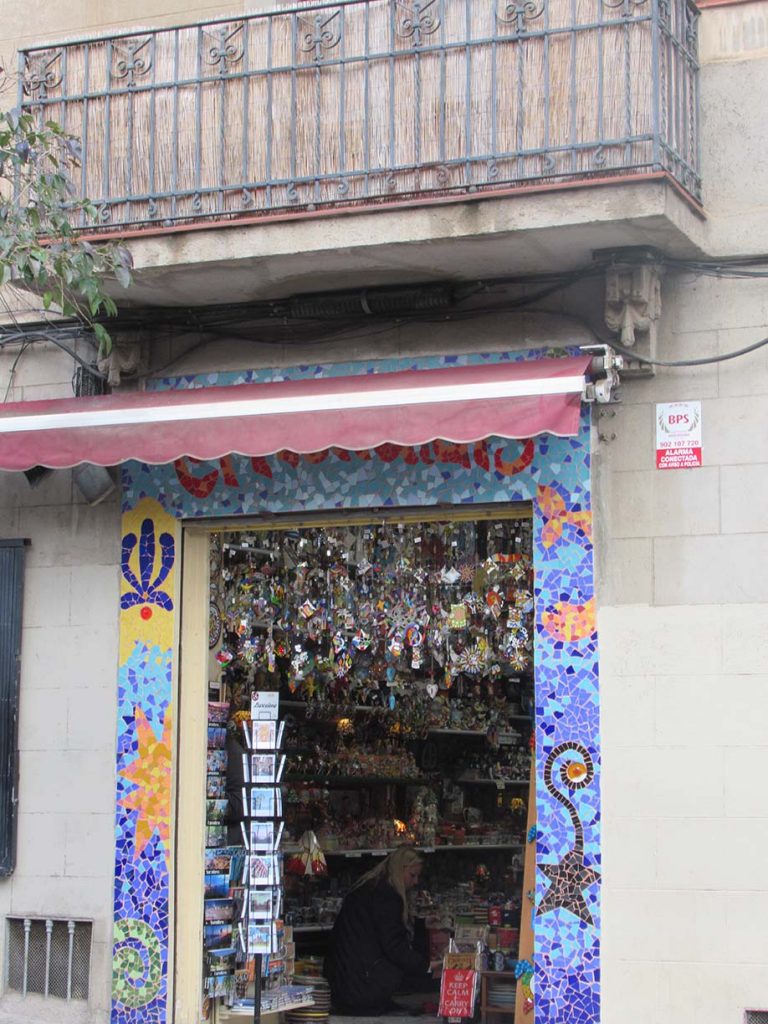 After that, we boarded the hop-on, hop-off bus again and got off near Las Ramblas, the well-known wide pedestrian area filled with street vendors and people of all nationalities. Strolling down it was a really memorable experience. 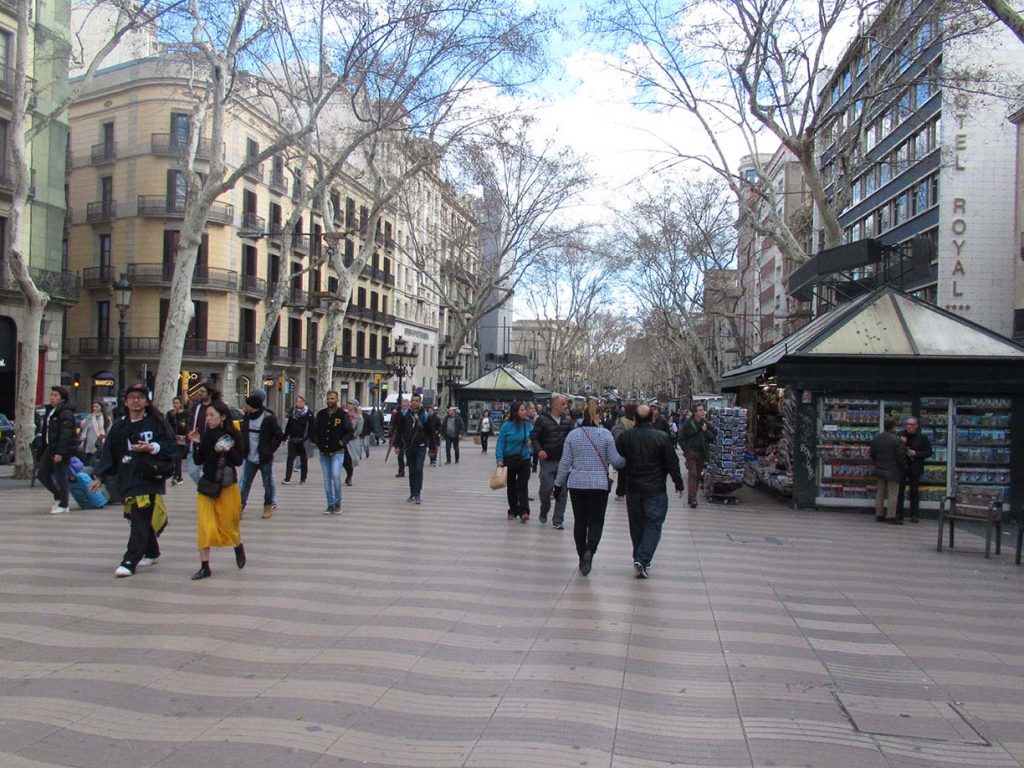 It took all day to visit these spots, but we thought we made a wise choice in picking them and went back to the hotel happy. Despite the rainy morning, the sun came out mid-day, too, for the perfect adventure.