Escape Room: A Unique and Interesting Adventure with Friends 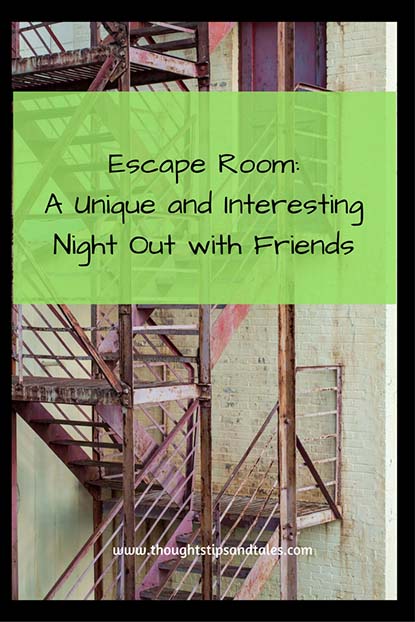 Escape rooms (also known as escape games) have been springing up everywhere. If you’ve never heard of them or experienced one, keep reading…

The idea behind escape rooms is for people (who know each other or random strangers) to participate in a physical group event where they solve clues to escape from a room in a set time limit. Each escape room or game is centered around a theme like “Escape Your Kidnapper” or “Escape Jail.”

The room is furnished to match the theme, and clues are scattered around the room, along with various padlocks, tumbler locks and combination locks holding drawers, cabinets and other containers closed; these containers contain additional clues.

The host describes a scenario and tells everyone to scour the room for clues to escape.

The escape adventure I took part in with six other women was an Undead Outbreak zombie escape.

Before being locked in, we were given a walkie-talkie and told we could ask three questions during the adventure when we were stumped (like lifelines on the TV show Who Wants to Be a Millionaire?).

The room we were locked in had animated “zombies” moving past fake “windows” on the walls, as if the building was surrounded by hordes of marauding zombies. The host told us the goal was to escape the zombies, and explained that we’d — at some point — crawl through an opening into another room when we solved enough clues. (An optional door was available for those who couldn’t crawl.)

The room itself was furnished like a living room, with a couch, book shelf and books, a desk and a fireplace. Several round peep holes were drilled in one wall, and half of the ceiling contained a giant maze, with a rubber ball in one corner, and holes on the opposing wall.

We immediately dispersed to look for clues — lifting things, pushing on things, running our hands around the edges of doorways, picture frames and the fireplace. It was definitely a “free-for-all” where everyone was determined to find something valuable!

The remainder of the hour was pretty chaotic; small groups formed and reformed to try to solve various clues, with people yelling out what they’d found.

We did manage to unlock quite a few containers and find extra clues, but nothing was obvious. The clues were really cryptic! 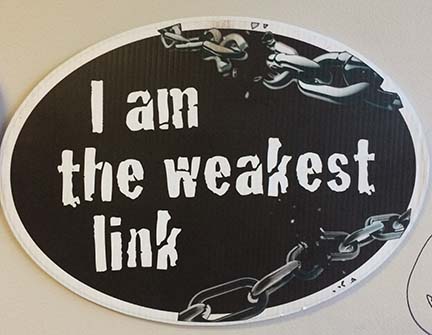 We eventually ended up in a bathroom with fake blood stains on the shower walls and a couple of zombie limbs scattered around. And — of course — more locked containers.

With the host’s help (we went WAY over our 3-question limit!) we ended up in a 3rd room — a science lab complete with beakers and a freezer in the corner. We found a few more zombie limbs and decided the head must be in the freezer.

By that time, though, our hour was up. And we were still locked in.

The host returned and explained the clues we hadn’t solved, so we had “closure” on the experience. And then he opened the door and set us free. 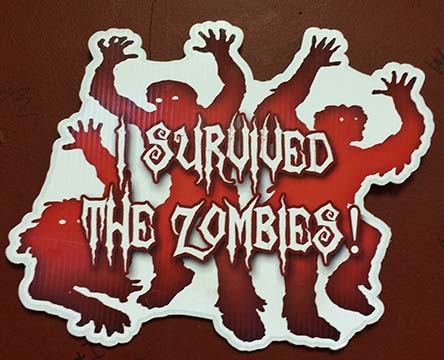 The host took several parting group photos of us holding a variety of signs that were Velcro’d to the walls, and he gave us markers and invited us to write on the walls with them. 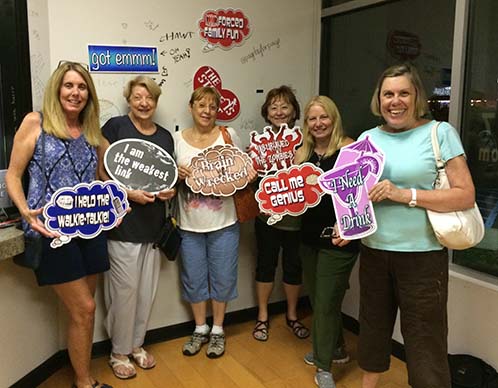 Some show-offs (!!!) had written messages like “Made it out in 38 minutes!” But we couldn’t come up with anything to write except “We tried…” so we skipped that step… and slunk out of the building.

I was still feeling a little “dumb” the next day, but it was definitely an adventure — and a unique and interesting night out with friends!

7 Responses to Escape Room: A Unique and Interesting Adventure with Friends