Goat Yoga is Great: Unique Fitness Fun on a Farm 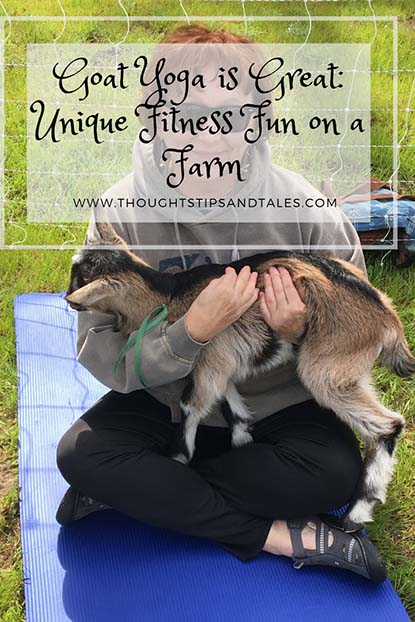 Have you heard about goat yoga? It’s a health and fitness “thing” now that’s gaining popularity all over the country, and it sounded so unusual I just had to try it! I’ll admit in the past I thought yoga in general was pretty dull, until I checked out some of the more unique variations on it (see fun fitness links below). After trying a session of goat yoga recently, my friend and I agreed it was great!

To begin with, you do goat yoga outdoors — which itself is something different. For goat yoga, we went to a farm (Winsome Winn Farm) just outside Charleston, South Carolina, where we live, on a Saturday morning with women from a local Meet-Up group for Maaa-Maste Yoga. We made reservations in advance and paid $25 each.

Goat yoga took place in a patch of soft springtime green grass, where a plastic enclosure was shaped in a circle. We each set our yoga mats on the ground around the outside of the circle and the yoga instructor led from the middle. We were told ahead of time to keep valuables like phones, cameras and purses outside the enclosure because goats are inquisitive and might take off with them! 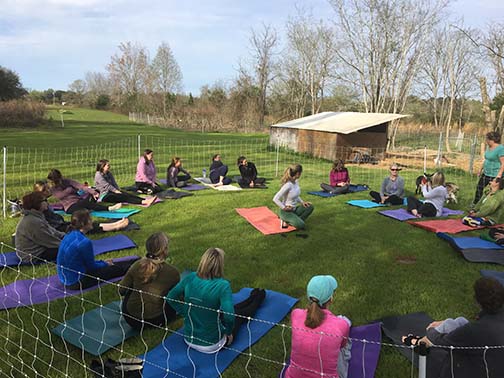 Five baby goats were already inside the enclosure; we found out later a couple of them were only three weeks old.

It was an early spring morning and the weather has been unpredictable lately, but the temperature was 59 degrees so we dressed warmly and the weather was perfect with a very slight breeze, sunshine and blue skies.

The instructor (Angela Davis-Dyer from Empower Yoga) put on new age spa-type music and began the class. The combination of being outdoors and up close to nature, the beautiful weather, the music and the peaceful atmosphere filled with sounds of various farm animals was very calming. And the yin yoga poses (extended stretches) felt great, too.

For a while, the baby goats were quite reserved, and stayed together on the side of the circle opposite us until their natural curiosity was aroused and they began to wander around. 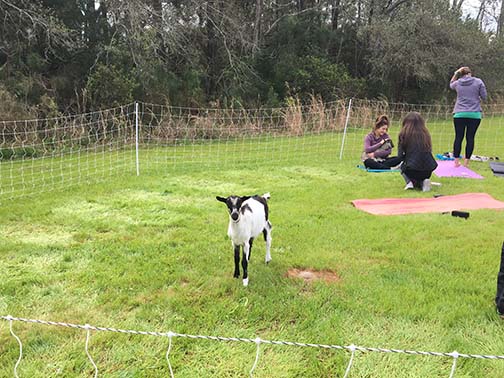 They were so cute that everyone tried to pet them, but they were still a little shy.

Half-way through the class, though, things got livelier. One goat spied a bright yellow post-it note that the instructor brought,  snuck over and snatched it. That’s when we found out young goats can run faster  than most people can! After some chasing and several more “steals,” the instructor put the note in the waistband in the back of her tights under her shirt — and the goat came over once more and nuzzled her back trying to capture it again!

The goats all became more daring then, venturing away from their home base and visiting and climbing on people. Many people had their phones out trying to capture up-close photos. My friend even shot a Facebook live video during class!

At the end of the class, everyone was invited to stay for a photo session and the farm owner placed a baby goat on everyone’s lap who wanted to hold one, which was fun to watch and do. Their coats were very soft and they enjoyed being held and petted — for a short time before they started to wiggle away. 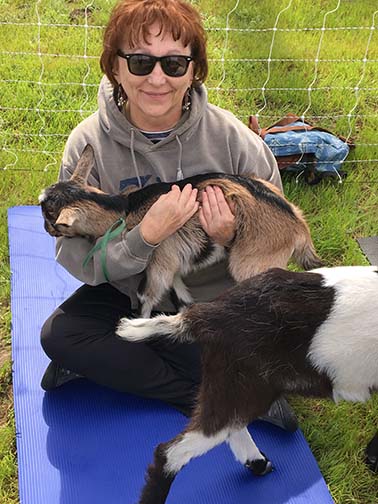 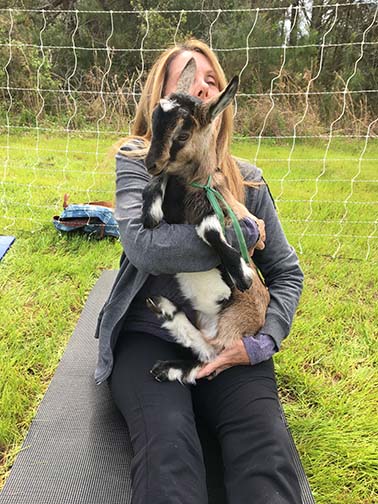 The whole experience was really fun — so if goat yoga comes to a location near you, give it a try!

8 Responses to Goat Yoga is Great: Unique Fitness Fun on a Farm