Posted on January 5, 2015 by blogqueendiane 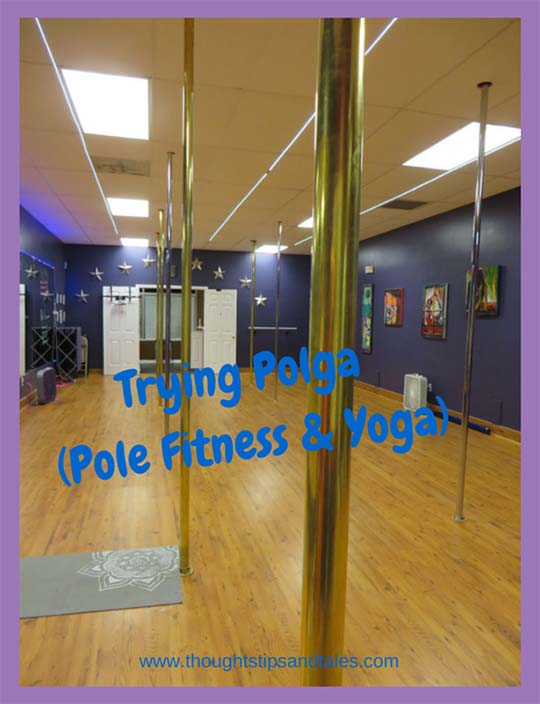 In my quest to continuously try new fitness challenges, I tried a Polga class at Inversions, a local pole fitness center.

When I told my friends about it afterwards, everyone initially thought I was going to tell them about Pilates and yoga — but the class involved yoga and pole dancing! 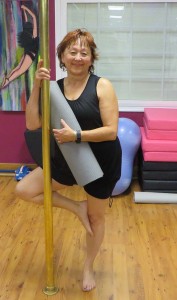 When I got to the studio, the room (with about 12 poles attached to the ceiling) was dimly lit with strategically placed white lights, and New Age-y music was playing softly. The 20-something instructor with long legs and a fabulous figure led her limber mother, a 20-something adventurous newcomer and me (the “mature” adventurous newcomer) through the class.

I’ve only done yoga about five times in my life, but it’s incorporated into the stretching at the end of BODY PUMP and other classes I take at my health club — and I read about yoga, so it was easy to recognize that we were essentially doing basic yoga poses using the pole as a prop. Have not been real excited about yoga in the past, but I really liked this!

Most of the poses were  fairly easy to do — although challenging. 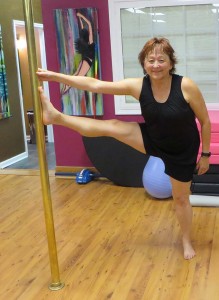 I did involuntarily snort out loud a few times, however — when:

(2) At the end of the class told us we’d be holding on to the pole, lifting one leg into the air, leaping and momentarily “flying” like Peter Pan. (Reaaalllly? I did not try to “fly” because when I took my one-and-only pole dancing class at another studio about four years ago, flinging my body around the pole resulted in bruises up and down my shins that I still think about and wince.)

The music was calming, the pace of the class was good, the instructor was knowledgeable, and there wasn’t any pressure to keep up with the others or prove anything… 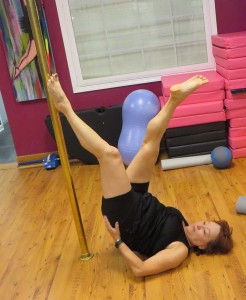 I tried to avoid looking at my short, pasty-white, muscular legs in the jumbo-sized mirror while trying each move, but the experience was fun, and I felt wonderful when we finished. My back felt particularly well-stretched.

Still felt great the next day until about 11 a.m. when my rear end muscles got sore. We obviously worked some muscles I don’t normally use in Zumba and BODY PUMP!

But that’s OK. Polga was a great experience, and I’m looking forward to doing it again.