Posted on December 5, 2014 by blogqueendiane 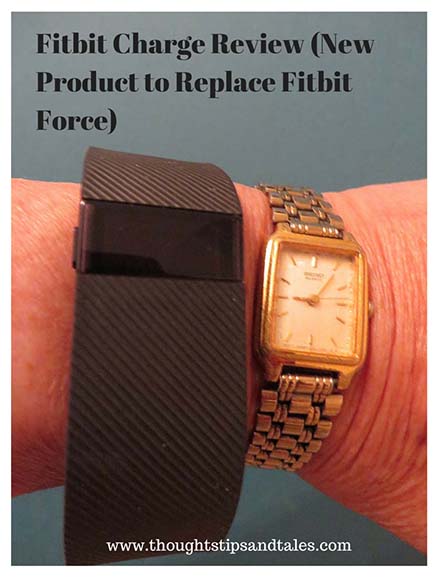 I’m a die-hard Fitbit enthusiast, and used the original Fitbit Force for ten months until it fell apart and I regretfully returned it under the company’s product recall. However, after getting in the groove of tracking steps every day and finally reaching the point where I’d average 10,000 steps a day, I couldn’t stand not wearing a fitness tracker! Was going to wait and order the Fitbit Charge HR next year to get a more secure wristband that worked like a watchband, but couldn’t hold out that long… I ordered the Fitbit Charge ($129), a new product that essentially replaces the Fitbit Force, from the Fitbit site. It arrived in less than a week and is working fine. It was surprisingly easy to load the software for the new tracker from the website, which seamlessly added the Charge info to the online dashboard without losing data from the previous ten months’ Force activities. That was an unexpected treat — thought I’d have to start from scratch again.

The Charge looks very much like the Force, except the plastic band is slightly textured (which I assume is designed to prevent rashes that caused the recall of the original product), seems a little wider and has a more rigid shape to the top of it.

The band has two prong fasteners now (instead of one on the Force) to press into holes on the other end. They appear to be metal instead of plastic. I’m not impressed with the new prongs; I lost the Fitbit the second day I wore it (maybe the prongs weren’t in the holes securely; everything is super-stiff when it’s new). After a fevered half hour of searching, I finally took off my shirt and shook it and found that the Fitbit was up my sleeve. (Whew!) Apparently it had brushed against something.

**Update: Have been wearing the Fitbit Charge all day, every day for nine months now** and haven’t had trouble since then, and am careful to be sure both prongs are securely hooked. **I discovered a fabulous, inexpensive accessory to keep the clasp from opening and the Fitbit from falling off, and wearing it has really helped.**

The computer syncing and online dashboard work well, like before.

The new product has several features the Force didn’t have:

1) It tracks hours of sleep automatically, so it’s no longer necessary to press a button when you go to sleep and when you wake up

2) It syncs to a smartphone to display caller ID (a function I don’t use because I’m not a cell phone person; can’t tell you how that works)

It’s a great product, and I still love using it.