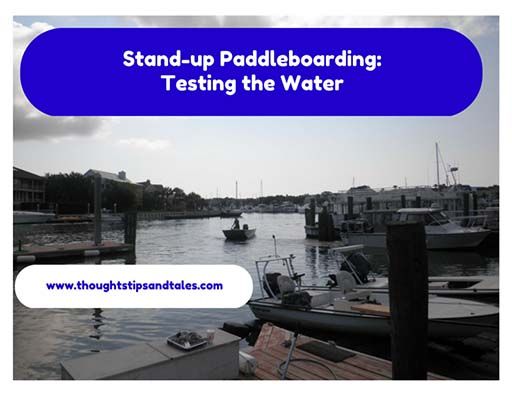 In the coastal area where I live, stand-up paddleboarding (SUP) has become very popular. You can sit outdoors on a sunny afternoon at a number of restaurants in the tourist district and watch people standing on flat surfaces that resemble surfboards paddling on a scenic creek toward the harbor.  Some of them even bring along their dog, who stands calmly on the board taking in the scenery. Nobody ever falls over and it looks peaceful and easy.

With that image in mind, I took my first SUP lesson last summer at the county park. How hard could it be?

A friend and I arrived at the park’s murky green lake, covered with algae (or something!!) and were set up with paddleboards, paddles and life vests. About eight other people of all ages joined us.

The hard part, however, was standing up — and remaining standing.

As soon as I stood up, I plunked into the water — the first in the class to get drenched. (You don’t want to hit your head on the wooden board and knock yourself out, so you need to remember to sort of hurl your body off to the side before hitting the water.)

I resembled a beached whale try to heave myself back up on the board to get on my knees and try to stand again. The teacher finally came over and sort of shoved me up, demonstrating to the class the proper way to remount the board.

We continued on our journey around this large, green lake and slowly rounded a corner. Immediately, a group of large, wildly barking dogs (from the dog park up the hill) came charging down a path heading for the water where we were. Now, I’m afraid of dogs – and the idea of getting eaten alive by a pack of dogs in the murky, green water was terrifying. However, it was a motivator to do whatever it took to keep standing on that board!

With that hurdle past, I continued to fall off the board at least 10 more times during the trip (the class record). Later, in an open part of the lake, the instructor actually had us lie on the boards (and I STILL can’t believe I did it) and do yoga poses on the SUPs. Really?!

This year, I decided to take another lesson – private! – and went to a nice little company located on the Intracoastal Waterway. A very cute instructor gave me a few tips while standing on land,  got me on a stable board with a life vest and we took off once again on our knees.

This time, the water was clear and nice — but there were hundreds of very expensive yachts parked on both sides of the rather narrow waterway we were traveling. My mind wandered off into a scenario where I whacked into the side of a yacht and the angry millionaire…. (well, you get the picture).

Once again, I had a couple motivators: (1) The cute instructor: did not want to fall over constantly like last year and have him paddle over and heft me up on the board and (2) The fear of plowing into a yacht.

My knees were shaking like crazy and I had to get down on them for a while to rest (while the instructor paddled circles around me) and my nose was running profusely for some reason (had to carefully and slowly wipe my hands over my face and rub them on the shorts I’d worn over my bathing suit – very tricky when you’re standing with your feet virtually nailed to the surface). And my shorts kept falling down, too.

Down the waterway, the instructor told me we’d be paddling through one of the 7-feet wide arches beneath some sort of concrete overpass. Oh my gosh – this time, my mental images involved smacking the board into the wide beams between the narrow arches….

While my technique definitely wasn’t glamorous, what do ya know? We probably paddled about half a mile (over an hour) and I stayed on that paddleboard in a fairly upright position the whole time. Success at last!