Posted on October 20, 2016 by blogqueendiane 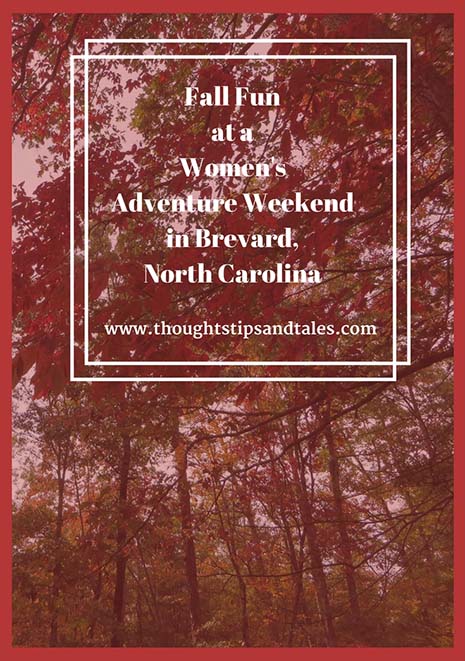 Ever since I moved South, have wanted to “go to the mountains” in the fall like so many other Southerners do.  This year I finally did — and had a fabulous time.

Departed from home on Friday morning with four women in my walking Meetup group, including the leader, Rita. We carpooled to Brevard, North Carolina and stopped for lunch in a charming cafe in a little town along the way — where we were surprised to note that we were the youngest patrons by about 20 years (and we’re all “over 50 – but adventurous” women)!

We stopped at our destination — Deerewood Lodge and Cabins — long enough to quickly unload the cars, and then drove to Dupont Recreational Forest located between Hendersonville and Brevard. We met our hiking guide — and her service dog, Yogi, and set out on a hike to four waterfalls. 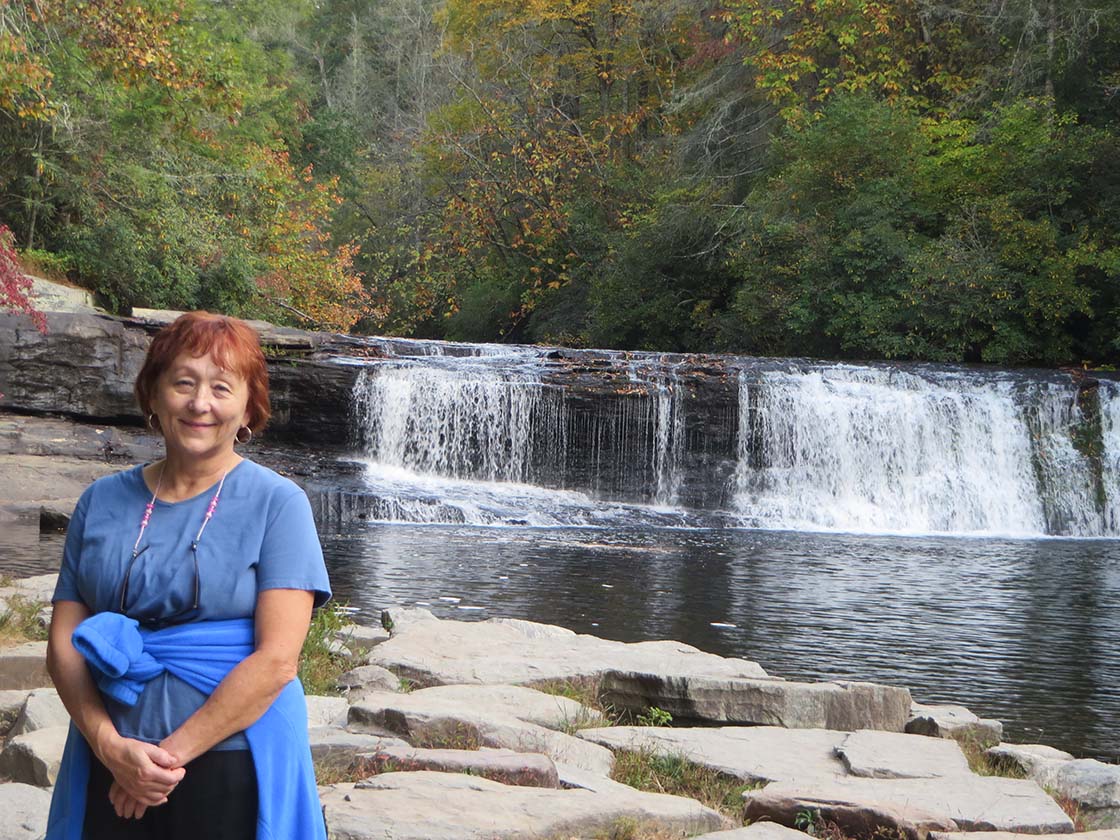 “Wow” is all I can say. The falls were gorgeous and each was very different. The leaves around us were changing colors and the temperature was perfect. And we saw a scenic covered bridge, too. 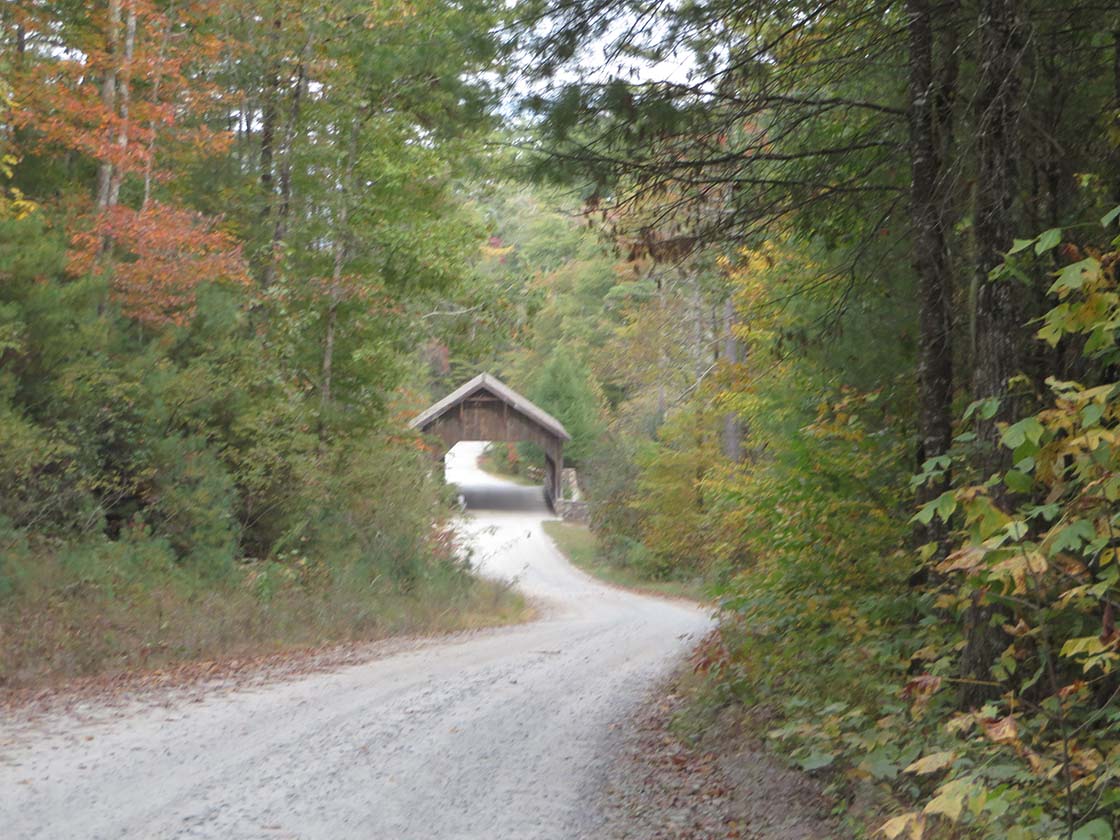 We got back to Deerewood before dark, and took our stuff to our rooms. Three of us stayed in individual rooms in the lodge — which was the coolest place ever — and the other two women stayed in separate cabins. 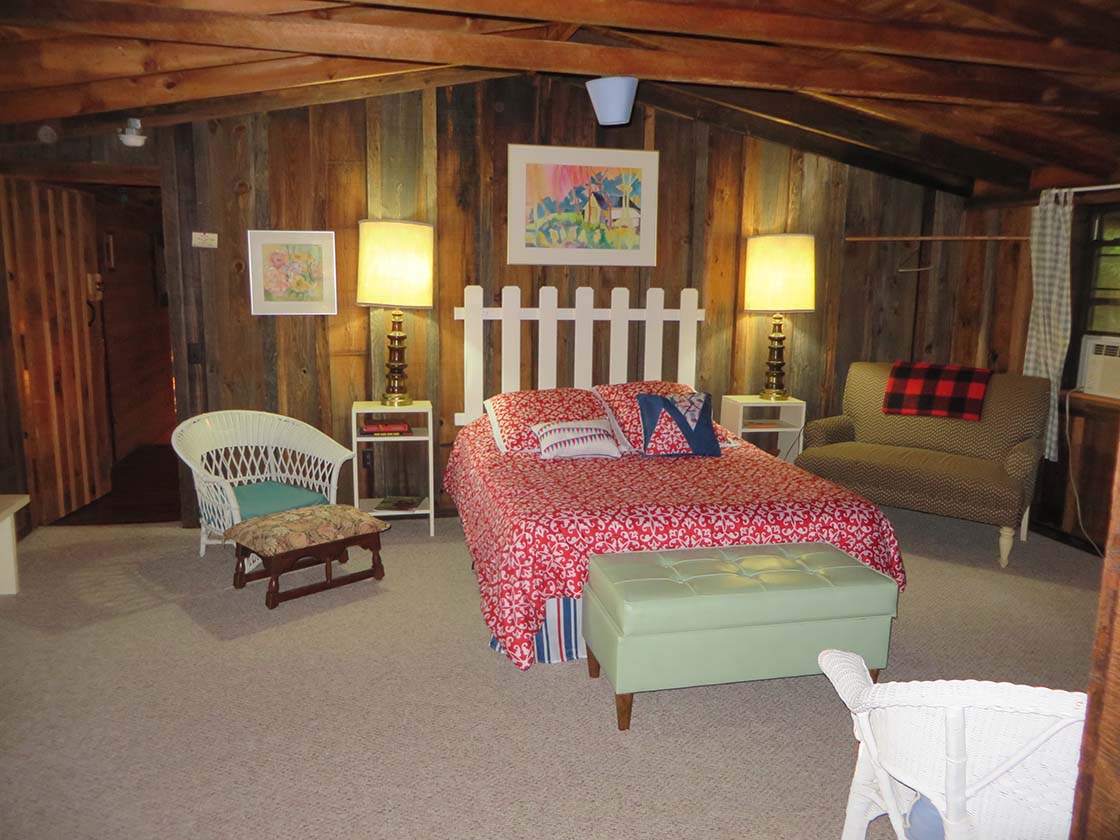 The lodge rooms are rustic and look like the interior of a cabin – but with comfy bedding and convenient bathrooms. Two long porches with rocking chairs cross the front of the building, and the rooms open up on them. 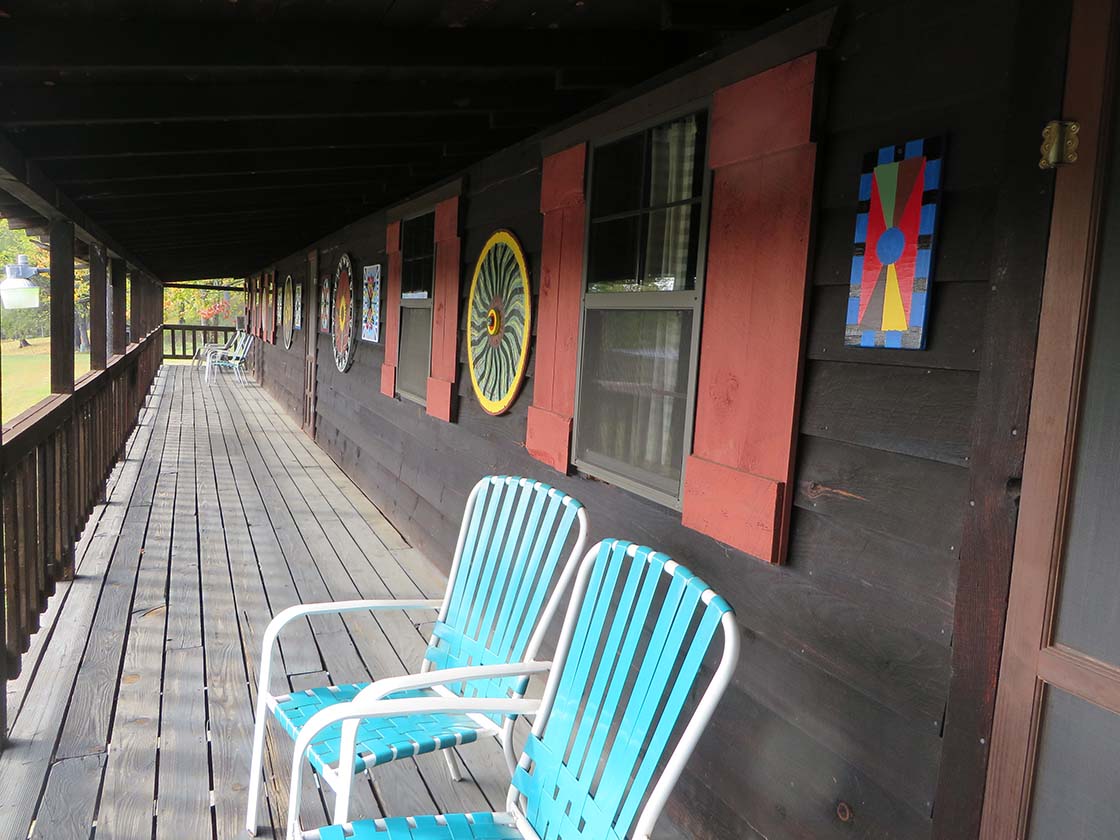 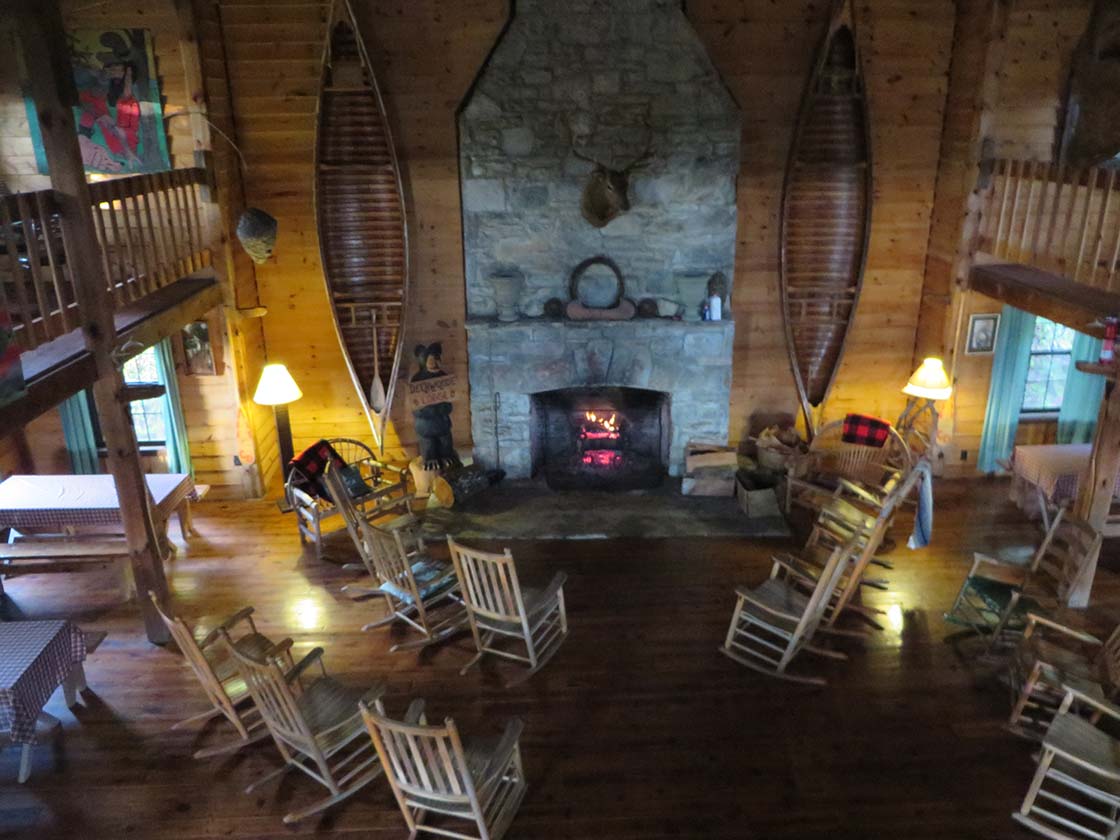 A huge common area has a fireplace (and there was a roaring fire when we arrived), lots of rocking chairs, and a communal kitchen. Native American rugs hang over the railings, big game horns are mounted on the wall — and so are two full-sized canoes!

One of my favorite things was the Southwest artwork throughout the property; the owner creates it and it’s funky and fun, making the place truly unique. 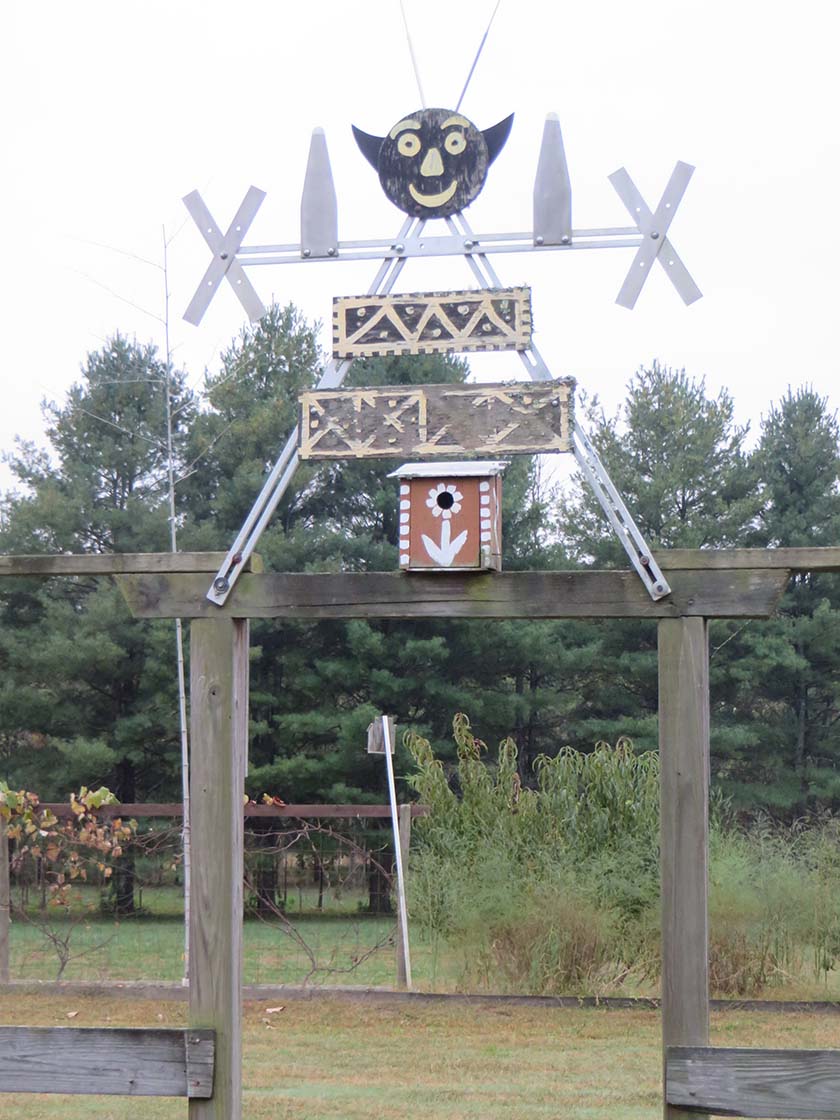 Several small lakes are located near the lodge, and a fenced-in area next to it contains about 15 free-roaming goats, chickens and donkeys. A community-center type building with ping pong tables and other recreational equipment is also nearby. (The property was formerly a children’s summer camp.) 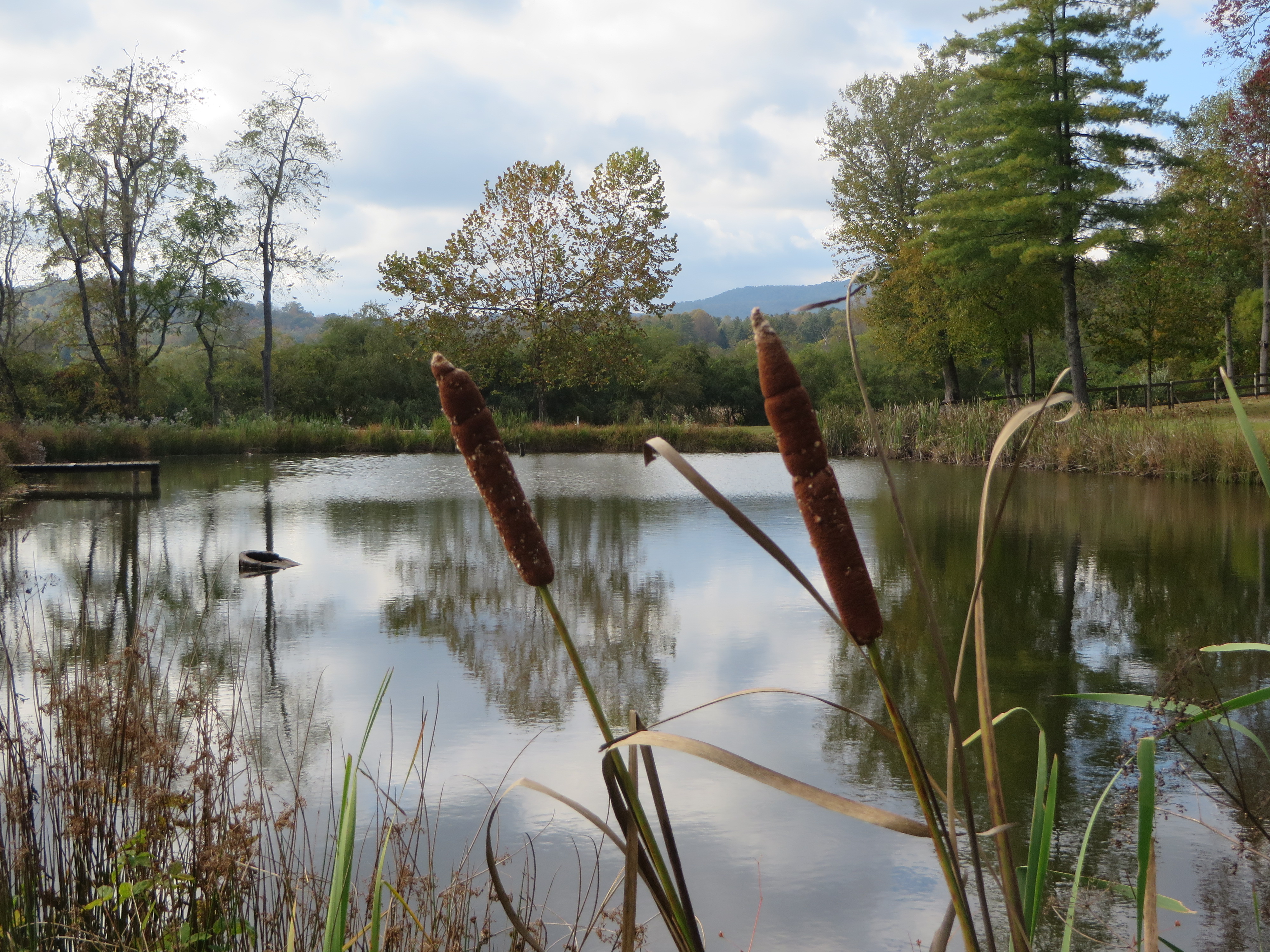 The second morning we ate breakfast in Rita’s cabin and realized we brought WAY too much food.  I could never locate the 18 bananas (!!) I’d brought…til  I finally realized they were in a bag in my lodge room after smelling rotten bananas there the second day. (It was so bad I had to set the bag outside the door of my room to sleep that night.)

After breakfast we headed to an outfitter for a guided kayak trip down the French Broad River. The trees were beautiful and the water was very clear — although we did run into some “mini-rapids” which weren’t scary — because if you tipped over, you could actually stand up; the water was so shallow.

After paddling downstream for 3 1/2 hours, we finally asked Rita how far we were going and she revealed it was an 8 mile trip, but she didn’t want to tell us that at the beginning so we wouldn’t get discouraged!

Rita’s not typically a “girly-girl” but she wore hot pink clothes that day, and had a wild multi-colored partially-pink kayak that matched her outfit — so we dubbed her “Barbie.”

That afternoon, we chilled out for a while, then headed to downtown Brevard for some shopping and dinner out. The town was cute, with hiking and tourist shops, a large O.P. Taylor toy store — and an old-fashioned drugstore — complete with counter service.

We’d heard before we got there about the legend of the white (albino) squirrels in Brevard — and it seemed like every shop sold white squirrel ceramic figurines or stuffed animals; even saw white squirrel lollipops! 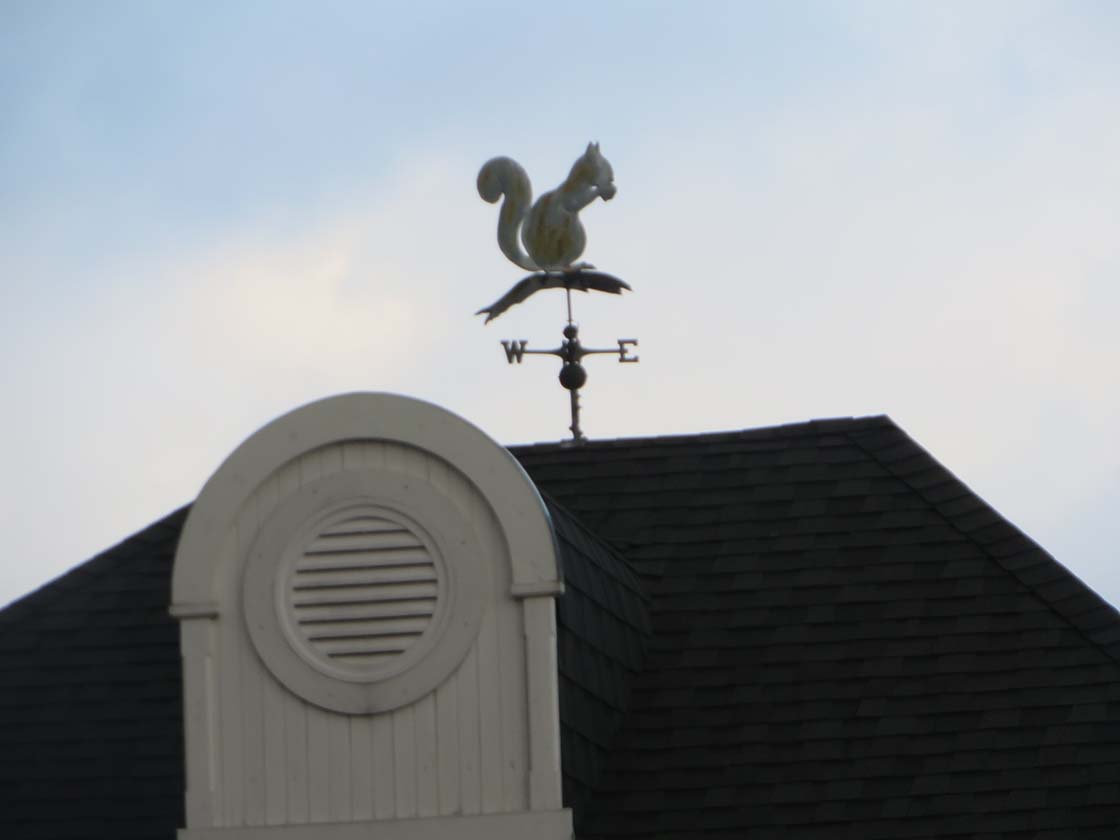 The courthouse weather vane had a squirrel on top of it, and the traffic light pole had a wire squirrel on it, too. But none of us ever saw a white squirrel!

We had dinner that night at The Square Root (everyone agreed the food was delicious!) with our hiking guide and Yogi. It was Yogi’s 5th birthday that day — so he wore a festive garland around his neck and a pointed party hat — and we put on party hats, too, for a group photo. We sort of made a spectacle of ourselves…. but Yogi got a lot of smiles and pats. 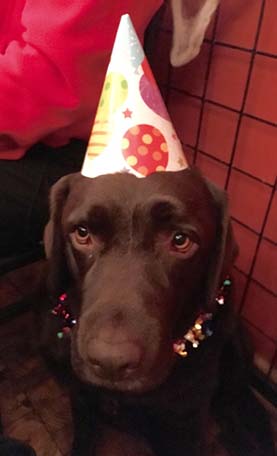 The party photos were later posted to Yogi’s personal Facebook page — and he even gave us each a party goodie bag at dinner!

Sunday morning, we took a stroll in the sun around the lodge property and explored a bamboo forest walking trail, climbed up an observation tower, and saw a lot of flowers and fields with mountains as a backdrop behind them. 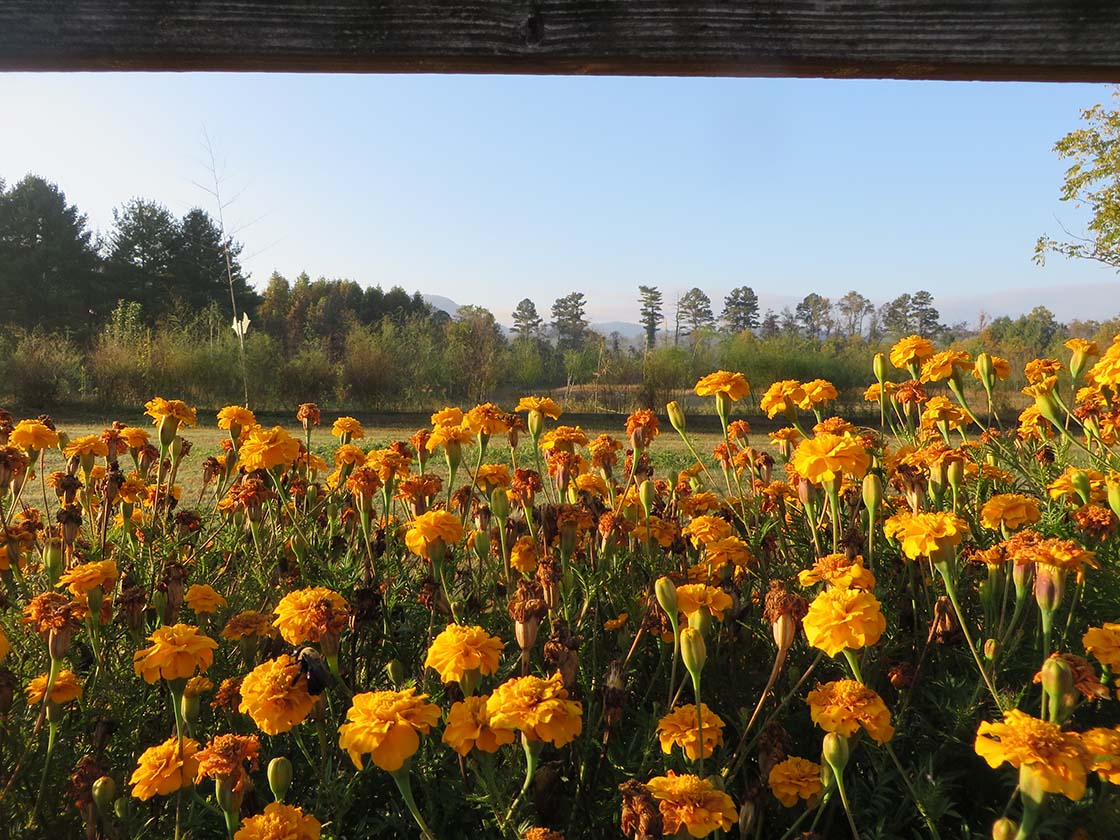 None of us wanted the weekend to end, but we finally had to make the five-hour drive home…

I always rave about Meetup groups, and after returning from the Fall Fun Women’s Adventure Weekend, am more enthusiastic about Meetup than ever!

Making New Friends as an Empty Nester can be Awkward

Scammers are Ruining Over-50 Online Dating

Cruisin’ Solo and Lovin’ It

Yoga Doesn’t Have to Be Dull: Amazingly Unique Yoga Classes

7 Things You May Not Know about Fitbit

Don’t Lose Your Fitbit: A Fabulous Fitbit Accessory to Keep the Clasp from Opening

Nothing Makes You Feel Better than a BODYPUMP Workout

Sports and Hobbies: How Many Can You Squeeze into a Lifetime? 79 So Far…

Confessions of an Adult Learning to Swim

How to Add a Reading Rack to a Treadmill

15 Responses to Fall Fun at a Women’s Adventure Weekend in Brevard, North Carolina